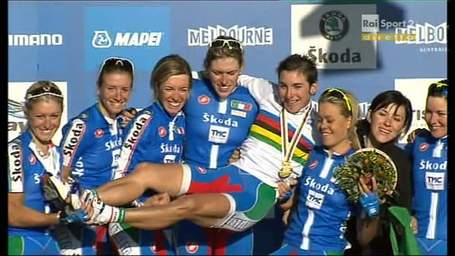 Italy's Giorgia Bronzini timed her sprint to perfection on the long drag to the line in Geelong today to claim the rainbow jersey at this year's UCI World Championships. Bronzini came past Dutch ace Marianne Vos in the final 30 meters as the stars of women's cycling ambushed an almost perfect attack from Judith Arndt of Germany and Nicole Cooke of Britain, two former champions, in an exciting, chaotic finale. Arndt and Cooke attacked with under 7km to go from a select group and held a lead of up to 13 seconds, but their biggest rivals were bearing down on them in the closing meters. Arndt started her sprint, but Vos unleashed a massive counter to her right, catching and passing both attackers with 50 meters to go. Emma Johanssen tried to squeeze past Vos on the barriers, but Vos was swinging wide and left no real room, and Johanssen got bonked by a camera for her troubles. But in the end it was Bronzini who came from behind, right up the center, as her rivals worked a bit too hard countering the Arndt/Cooke attack, and Bronzini's final sprint was enough to get into rainbow for 2011. Provisional finish: