It's a Wrap! Race Day of the Year Nominations Please...

Share All sharing options for: It's a Wrap! Race Day of the Year Nominations Please... 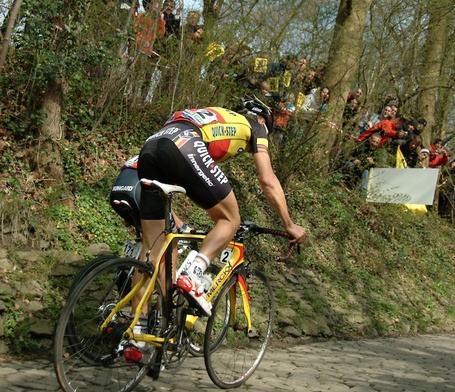 First, a process note: we will announce the official VDS winners on Monday next. I said I'd give the powers that be a week from Lombardia to sort out any pending doping cases. Arbitrary? Perhaps. But I said it. So...

Time to nominate your favorite day of racing from the 2011 season. As you may recall from past seasons, we'll gather up some nominations first, then next week we will open the polling and come up with a vote. I've threatened in the past to override the will of the people but never have, so I think at this point barring a draw I will consider myself no more than one vote. Majority or at least plurality wins. Use this post to nominate the best day, and if you like, make an argument in support of it to sway the voters.

My nomination? Obviously the Tour of Flanders or E3 Prijs has to get some consideration from the Spring Classics. Flanders was a great mano-a-mano between two champions, while E3 was a very exciting ending and foreshadowing of what was to come. I suppose my judgment can be a bit clouded here. From the grand tours, I know what Giro stages will get nominated so I'll leave that to others. From the Vuelta, the Bola del Mundo stage is a big one. But my vote for a day from a grand tour goes to the Tour stage through the Hell of the North. I like that this was truly a classic, full of drama and attacks. It's nice to see the Tour expand the definition of a "grand tour" to a race that encompasses all disciplines of road cycling itself. Like the Giro has been doing since forever.

OK, you have the pen now. Remember, don't nominate whole stage races, but feel free to pick out a day from a stage race. Or a single day event. That's about it for rules.

Photo by Chris Fontecchio for the Podium Cafe. Or maybe Mark Blacknell. I can't remember.