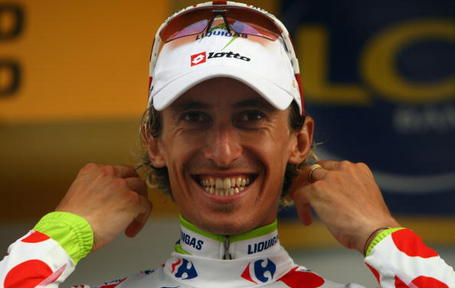 No doubt you've seen the news: Italian anti-doping authorities have ruled that Franco Pellizotti did not commit a doping offense, despite the UCI's argument that his bio-passport showed irregular results. The decision came after a four hour hearing at the Italian national sports tribunal. Pellizotti is now free to ride as soon as he finds a team.

Ettore Torri, Italy's anti-doping prosecutor, had recommended a two year sanction for the Italian, who finished third in the 2009 Giro d'Italia and won the mountains jersey at the Tour de France. But the final decision for doping sanctions in Italy lies not with Torri. Rather, the Sports Tribunal determines all doping sanctions. Sometimes, as in this case, the Tribunal rejects the recommendations from Torri and his investigative team. In this case, the Tribunal cited WADA rule 3.1 in its decision and concluded that the evidence did not offer sufficient proof that Pellizotti had doped.

Lawyers for Pellizotti claimed that the UCI misinterpreted the passport data. Move along, nothing to see here. In their view, the rider should never have been investigated. Other experts at the hearing disagreed. According to Eugenio Capodacqua, the rider's data from the Giro d'Italia and the Tour de France in 2009 raised questions. Pellizotti's blood values went slowly up in one case, but stayed the same in the other. Under normal circumstances, current scientific theory holds that a rider's blood values should drop over the course of a three week grand tour. The Tribunal ruled that these anamolies did not offer sufficient proof of doping to sanction Pellizotti.

The decision potentially strikes a blow to the ability of the UCI to use bio-passport data to prosecute doping cases. Little wonder that anti-doping researchers are busily seeking new ways, such as the tests for plastic residues, to prove doping cases more directly. The bio-passport continues to hold promise as a means for targetting testing, but this decision suggests the difficulty of using the data on its own to hand out sanctions.

At the same time, the UCI will almost certainly appeal this case to the arbitration court in Lausanne. The arbiters have previously upheld sanctions on the basis of anamolous blood values, as in the case of German speedskater Claudia Pechstein (scroll down). The Pechstein case turned on reticulocyte levels, and the ruling stated, "the CAS Panel found that the percentage of reticulocytes values shown by the athlete in Hamar on 6 and 7 February 2009 constituted abnormal values in comparison with both the general population in Europe and other elite speed skaters, as well as in comparison with her own usual values." No details on the abnormalities in Pellizotti's case have yet surfaced. While the Pechstein case offers a precedent for sanctions on the basis of passport data, the decision suggests that the anomalies in her case were quite pronounced and specific. It's entirely possible that the Pellizotti numbers are more ambiguous and consequently, the outcome of the likely appeal is impossible to predict.

In the meantime, Pellizotti pronounced himself satisfied with the decision, but will also seek damages against the UCI. The Italian, who had a contract with Liquigas this season, could seek up to €1.5 million in damages. For their part, Liquigas has already criticized the passport program as "poorly managed," while President of the Italian Federation Renato Di Rocco commented today that Pellizotti had "paid too high of a price." No comment has yet emerged from the UCI. No doubt they are busy lawyering up.