Share All sharing options for: More Nominations Pls: Rider of the Year! 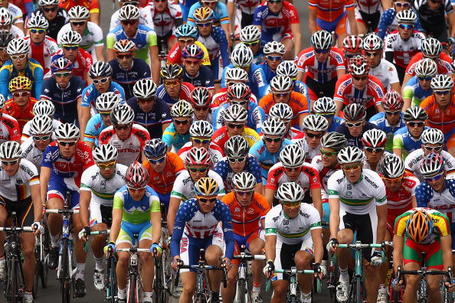 This is a bit of a conundrum. In past seasons I have asked for you guys to nominate your choices for Rider of the Year with a subsequent vote. Nothing odd about that. Whoever struck your fancy was in, for an argument at least and maybe a place on the final ballot.

This year things are a bit different. You see, we went through great pains -- studying algorithms, google maps, trips to the University of Washington Wind Tunnel, and lots and lots of pasta -- to create a seasonal calendar that functioned as both the VDS schedule and as our World Ranking schedule. As you can see, Vincenzo Nibali ended the year ranked #1. So he's the rider of the year, right?

Maybe, but I'll throw open the conversation to see if you all can rebut that presumption by nominating different riders and arguing about why their lesser point totals in fact mask a better performance. A couple names spring to mind. Fabian Cancellara achieved some historic goals this year. Philippe Gilbert was nearly as historic, or at least kicked a lot of ass for a guy with no shot at a grand tour placing. Tyler Farrar took his mix of skills, added some bad luck in July, and still managed to double his points from last year. And so on.

OK, who ya got? Let's spend a coupla days nominating, and we'll put it to a vote next week.