Share All sharing options for: 2010 Review: Best and Worst Transfers of Last Winter! 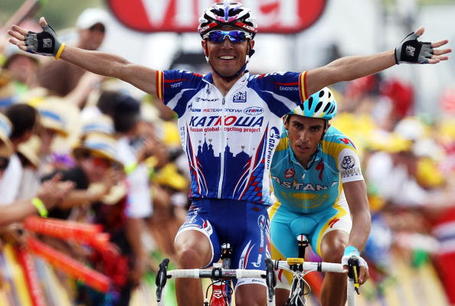 I covered this a bit in my Bike Talk Radio segment this past weekend, but it's really a PdC post. With the benefit of hindsight, what were the five best and four worst transfers of the 2009 offseason? These assessments are based solely on what we saw this year; I get that a year from now maybe things will look different.

Before: Toiling in the long shadow of Alejandro Valverde, Rodriguez looked precisely like a guy in need of a leadership role, and waiting for the Spanish justice "system" to clear out the top spot at Caisse d'Epargne probably struck Purito as a bad idea. Now, it's not as though he ran bottles the whole time. Rodriguez scored a nice win at Montelupone in Tirreno, and his second at Liege-Bastogne-Liege in 2009 -- with his captain back in the pack -- suggests he wasn't always completely hamstrung. But in the grand tours there was only one leader.

After: Rodriguez surged all the way to a top-three world ranking in pretty much any system you can devise (3rd at CQ, T3 at the Cafe), almost entirely on the back of his stage racing. Riding as a captain, he achieved a few landmark results previously unavailable: winner of the Volta a Catalunya; 8th at the Tour de France; 4th at the Vuelta, which will eventually morph into a podium place, to go along with the leader's jerseys he grabbed along the way. I'm not sure it was win-win; Caisse d'Epargne elevated Luis Leon Sanchez and David Arroyo into captaincy, and the former rewarded Unzue and co by signing with Rabobank. But it was a complete success for Katusha, who needed a top-ten Tour guy, and for Rodriguez, who finally knows what he can do in a grand tour.

Best of the rest... and the worst! On the flip:

Before: Evans had a solid run for his Belgian squad, but was nearly always left wondering what could have gone better. Often aloud, to reporters, and concerning his team's support of his efforts. It's telling that when he finally broke through in his -Lotto years and scored the iconic win he deserved, it was in the kit of the Australian national team.

After: I'm not sure how much better supported Evans was this year at BMC, at least in the grand tours -- Silence weren't as bad as all that and BMC weren't mistaken for Liquigas or Saxo Bank in the stage races. But he seemed a lot more forgiving toward the circumstances around him. Who knows. Anyway, we've already talked about his honorable defense of the rainbow. So I'll just add a few words here about what a great transfer this was for BMC. They were the #2 players on the market last winter (after Sky) and seemed set on cobbling together a serious classics squad, which didn't really work out. So when Evans made a somewhat late decision to jump to Hincapie's new arrangement, he wound up bringing the credibility the team thought they'd already bought. And to top it off, losing Evans was pretty healthy for Omega Pharma too, with Belgians Gilbert and Van den Broeck ready to assume team leadership.

Before: Surly classics rider, known for bagging big results if not signature wins.

After: Happy classics rider, known for bagging big results and the occasional big win. Seriously, Flecha hardly changed as a rider, but he did seem a lot more pleased with life at Team Sky. Gone were the grumblings about his team chasing him down. A moments stand out for me. First, winning the Omloop in his first Sky moment (apart from Qatar) was a great statement. But I also saw him in Harelbeke, where he was very gracious after finishing third to Boonen and Cancellara, and again in Roubaix where he applauded as he crossed the line -- either Thor Hushovd for a solid sprint for second, or himself for a strong third. Either way, he just exuded joy this spring, which is a very pleasant turnaround from who I thought he was. Rabobank are better off as well, with their stable of young Dutchmen (mostly) ready for prime time.

Before: Talented kid, very fast turn of speed, but not ready to lead a team.

After: Velits blossomed big time at HTC in the latter half of 2010. This isn't exactly on Milram, who got by with what they had, and Velits wasn't ridden into the ground or anything. But at HTC the results suggest the former U23 World Champion was given a lower-key role for most of the spring and summer, hit his stride in time for the Vuelta, and turned in a memorable breakout performance. His third overall -- which we'll remember as second once Mosquera is crossed out of the history books -- was impressive enough, but his win in the long, flat Penafiel time trial really makes you wonder what kind of a stage racer Velits can be. He's 25, and the Vuelta isn't the Tour, but he's got some great days ahead of him. My hunch says he's a new, more credible Kim Kirchen, with top ten Tour potential and a serious threat to win some hilly classics.

Before: Fourth or fifth on the HTC sprinters' depth chart.

After: First or second on the Team Sky sprinters' depth chart. This wasn't a breakout season exactly, but it was refreshing to see Henderson win for Sky in its first-ever race, and to have a shot at his own finish in some bigger races.

Before: Fourth in the Tour de France; ace cronoman; hitting his prime in time to capitalize on his huge talent.

After: Karmic black hole, mysterious loss of form at the one race he paid any attention to. Sky paid dearly for him to be the face of the British Pro Cycling Project, and that he was. The overpaid, underperforming, poorly thought out, not very lovable face.

Before: A Swedish J-Rod of sorts, with the climbing chops to win on the Strade Bianche and nearly on Montelupone and Alpi Di Siusi... but overlooked by his team, most notably when they dropped him from the Tour roster.

After: His move to Sky was also a J-Rod move -- let's give a solid climber a chance -- until Wiggins' last-second arrival buried Lofkvist in his own team's depth chart again. He missed the win at the Eroica and his points were cut in half, so it's possible his open disappointment in the Wiggins fiasco never really faded.

Before: Wrapping up a somewhat cursed World Champion's defense, albeit with a win in Poland which pointed toward a return to his recent, Flanders-winning form.

After: His luck didn't improve much after joining BMC in a ballyhooed union with fellow Cobbles protagonists Hincapie, Burghardt and Kroon. Ballan got sick in March, scuttling his hopes of peaking in Flanders, and when it seemed like maybe he'd hit his stride in time for Paris-Roubaix, he found himself on a plane home after a doping ring clouded his future for a hellish month, at the end of which he was cleared of any connection. The remainder of the season showed Ballan back in form, his peak being second on the Tour stage to Bagnerres-de-Bigorre, so the second go-round at BMC might rewrite the story. But so far, meh.

Before: Belgian draft horse on a Belgian squad, known for storming Paris-Roubaix and occasionally hammering the field at the Tour.

After: Garmin-Transitions made its own moves last winter to beef up a classics squad that already featured Martijn Maaskant, Tyler Farrar and Ryder Hesjedal. [Not to mention a secretly frisky David Millar.] Maaskant looked like a Flanders prodigy, Vansummeren gave them instant Roubaix credibility, and Farrar was the lingering wild card. Ultimately only Farrar and Millar were seen in the front of the classics, and nothing summed up the season more than Vansummeren lying on the dirt next to the Secteur Bernard Hinault in a concussed daze. Johan recovered in time to remind us what he can -- and will likely again -- do on the cobbles in the Arenberg stage of the Tour, but by then his team was nursing its wounds, and the year ended with an incoming World Champion talking of his dream to win Paris-Roubaix in the Rainbow, clouding Vansummeren's short term ambitions considerably. Good guy, bad luck.