Men's Elite RR: Thunder and Lightning! Hushovd In a Flash

Share All sharing options for: Men's Elite RR: Thunder and Lightning! Hushovd In a Flash 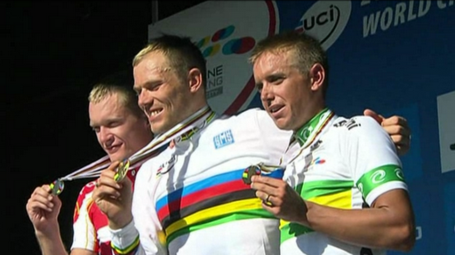 Thor Hushovd became the first Norwegian to don the rainbow jersey today in Geelong, Australia with a perfectly timed sprint on the hard, uphill finale of an incredibly chaotic race. That there was even a sprint was in doubt all day, with a 39-rider group of stars like Vincenzo Nibali, Cadel Evans, and race favorites Philippe Gilbert, Filippo Pozzato and others up the road all day. On the final two laps, that group grew and splintered numerous times, and the final lap was severely animated by Gilbert's attack on the penultimate climb, up the Ridge. Gilbert gained some 21 seconds on the group, but died with 2km to go. The attacks weren't over, but the durable sprinters like Hushovd, Allan Davis, Matti Breschel, Oscar Freire and others saw their patience pay off in the last 300 meters when Niki Terpstra of the Netherlands was swallowed up and the sprint was on. Denmark's Matti Breschel got a gap on the closest challengers, but Hushovd came past him to his left to win by two bike lengths. Davis, the local hope, barely hung on to third over a hard-charging Pozzato.