Share All sharing options for: Victory Laps and Shoulder Shrugs 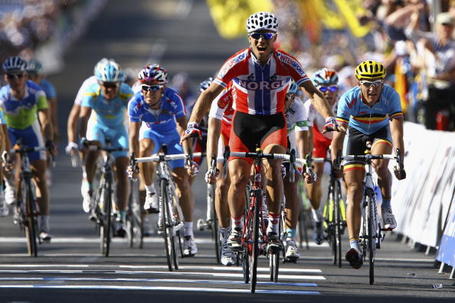 Ah, the power of the pen, where I get to blurt out random crap that you guys already thought of. But it's been a big week, and often on Mondays I sense (by surveying my own brain) that maybe people would like to keep the convo going just a few minutes longer before, inevitably, it's time to turn the page. So here goeth...

Big ups to Australian Cycling or Melbourne2010 or whoever gets the credit for a fantastic course. Yes, all three mass start events came down to a sprint, but from pretty select fields, which testifies to the course's challenging nature. And best of all, they were sudden sprints, in doubt until the final minute or minutes of the race. No scenes of guys controlling the front of the field for the last 10km or whatever. I don't mind a sprinters' course, and I love a good sprint... as long as I don't know 30 days ahead of time that this is the only possible outcome. Hell, had the wind not kicked up on the Ocean Road, we could well be talking about how the race was won solo from an attack on the penultimate climb, and how, see? I told you! it was really not a sprinters' course. Great suspenseful finish from a battle-hardened field. That's what you look for in a world championship.

It follows, of course, that from a well-designed course you get a guy in rainbow who will do the jersey proud. In fact, who among the finale would you not have said that about? Allan Davis? I'm not a huge fan but he wins. Oscar Freire? When he does manage to stay fit, he's a badass... and a nice, well-liked guy. Yukia Arashiro? The reaction in the media and the ticker-tape parade in Tokyo would be well worth whatever he mounted for a defense. Thor Hushovd, love him or not, is about as reliable a pick as you'll find to ride with honor in the arc-en-ciel. He stays healthy (knock on wood) and rides impressively everywhere besides his former domain amongs the Tour stage bunch gallopers. The idea of him winning Paris-Roubaix in the rainbow jersey ... let's just say that would put him in select company. The only instances of the rainbow jersey crossing the line with arms raised in Roubaix were due to the efforts of Bernard Hinault (1981), Francesco Moser (1978) and Eddy Merckx (1968).

One last thing, our cat is named Thor. Not for Hushovd, but I have no trouble referring to our fat, lazy feline as the world champion for the next 12 months. Assuming, against nature, he lasts that long.

Why does everyone bash Pippo Pozzato every time he races? I'm calling the foul on Bjorn Leukemans for bitching out Pippo for not helping him make a six-man break stick heading into the last lap. For one thing, while Pozzato hasn't hit back, one possible explanation he didn't like his chances was that the break included Leukemans and Gilbert against the lone Italian, plus Kolobnev, Moerenhout and Cadel Evans. Secondly, Pozzato obviously did like his chances in the sprint, and with a little more luck in his positioning he might have won, given his closing speed. Bottom line -- in a tough race you get one chance to win, and it wasn't especially obvious during the race to a guy like Pippo what that would be. He chose to take his chance in the bunch. I also don't buy the Cipollini line about bringing more traditional sprinters, given what happened to most of those guys. In the bigger picture, there's something about Pippo that brings out the worst in almost everyone around him, but I sincerely don't get it and plan to root for him even more next year. Oh, and he was among the first to predict that Hushovd will honor the rainbow. Yeah, what a jerk.

Speaking of choices, I'm also not buying any hindsight on Gilbert's attack. The strongest guy doesn't always win, at least if there's a sprint involved, and Gilbert says he looked in on Thor and thought he was too fresh for Gilbert to beat to the line. He also claims that a headwind in the final 3km killed off his chances. Given Hushovd's strong finish, I don't see any reason not to go along with Gilbert's assessment that he needed to try something else. Very few guys flying back to Europe today can do so with complete satisfaction, but at least Gilbert knows he emptied his chamber.

Matti Breschel's track record does a poor job of demonstrating what a beast Rabobank have purchased for next season. Just two paltry wins -- Dwars and a DanmarkRundt stage -- after mechanical errors prevented him from possibly being the big hero in Flanders, and now a very, very near miss on a hardman's rainbow jersey. No way is he just the 49th-best cyclist in existence right now.