Share All sharing options for: Daily Dope: Kirk O'Bee Gets the Lifetime Banhammer 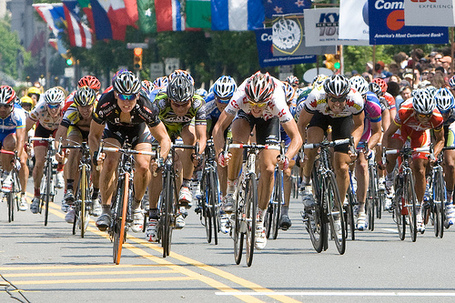 The USADA today threw down a lifetime ban for U.S. rider Kirk O'Bee, a successful criterium racer, who counted two National criterium titles among his results. O'Bee tested positive for EPO in May 2009. The failed test represented a second offense for O'Bee, who previously tested positive for Testosterone in 2001. The anti-doping agency conducted a detailed investigation in the case, and also ruled on the basis of "non-analytic postive" evidence. That's jargonese for stuff other than bodily fluids.

In their investigation, anti-doping authorities found evidence dating to 2005 that O'Bee had bought products such as HGH and EPO from a variety of sources, including a dealers in Canada and Mexico. According to investigators, he also bought a centrifuge from eBay under the name "bluevanrider." O'Bee also exchanged emails with team-mate Nathan O'Neill about receiving his "vit.E," a common shorthand for EPO. The report also names Marty Nothstein among O'Bee's correspondents, but does not provide any details about what O'Bee and the ex-track racer might have discussed. For his part, O'Bee claimed that his estranged wife had used his email account to frame him, and claimed that his EPO positive resulted from one-time use. The arbiters found this argument unconvincing, and drew on the testimony of computer experts who analyzed his hard drive and email files.

Consequently, the anti-doping agency has ruled that O'Bee is banned for life from the sport and loses all of his results dating from 3 October 2005. Those results include a National Criterium Championship in 2007, where O'Bee took the Stars and Stripes after finishing second behind Canadian Martin Gilbert. The next American finisher was Shawn Milne, who then rode with O'Bee at HealthNet. No word on whether Milne will be given the victory, or if O'Bee simply loses his result.

It's a bit mind-boggling to consider four years of race results, and the prize money that went with them. The decision offers a bittersweet kind of success for anti-doping advocates. On the one hand, O'Bee is at last out of the sport. On the other, look how many results he stole.

Want to read the decision? Grab the Pdf.