There are days when I lack all objectivity, and this is probably one of them. It seemed not so long ago when the English-language cycling bookshelf was constituted in a manner that could drive a guy like me rather batty. At least half of the better shelves (say, Powells Books' cycling section in Portland) consisted of the Tour and more Tour. The bulk of the remaining space went to season reviews by notable authors -- Sam Abt, John Wilcockson, etc. -- and the odd rider bio, or Greg LeMond's guide to fixing your bottom bracket. Now, I love the Tour, and the Giro, LeMond's shifter tuning secrets, and Sam Abt's work or Graham Watson's pictures as much as the next guy. But day 1 of my cycling fanhood was the 1985 edition of Paris-Roubaix, and little has happened since then to dissuade me from thinking of myself as a classics guy, first and foremost. If only other prolific anglophones saw things my way, perhaps that shelf might look a little more inviting. 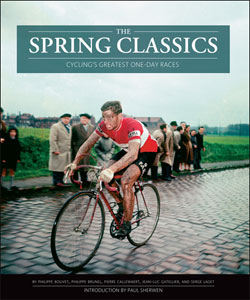 But times are changing, and fast. Roadie-turned-author Joe Parkin has done more to promote Vlaanderphilia in the last four years, with two books and Paved Magazine, than all of his anglo predecessors combined. But that's just a symptom of the changes. As Lance fades away, American fans are among those considering their options, and turning toward the one-day scene seems more viable every day. We can watch the great classics, live or in Sporza clips, without much trouble (unless you consider drinking 13% trappist ales at 4:30am "trouble"). We can connect with the riders who celebrate the Monuments. I hear there's even a website or two where you can talk all day about the joys of riding on muddy cobblestones.

VeloPress, the premier American publisher of cycling books, is catching on. Following their beautiful, dramatic coffee-table book on Paris-Roubaix comes The Spring Classics: Cycling's Greatest One-Day Races, which utilizes the same format and same L'Equipe authors (plus an additional Phillipe) to tell the broader story of the greatest one-day races. Like the Paris-Roubaix book, the text is an hors d'oeuvre to the main course, the photos. But the pictures tell the stories rather well, and the large hardcover 10x12.5" format lets the images run riot.

Unlike the single-subject predecessor, the book surveys fifteen different events -- the five monuments of cycling, another half-dozen near-monuments, and a handful of races whose greatness is either fading or extinct. Where Paris-Roubaix ran long and resorted to some of the race's inevitable cliches, The Spring Classics confronts the opposite challenge of trying to capture the grandeur of races as old as 150 years in a few pages of text. Without the room to tell the whole story, the writers do a surprisingly good job of capturing the essence of the biggest races, mixing stories old and new which mingle effectively with the basic story of the race. Where Paris-Roubaix struggled at times to strike the ideal tone, this book succeeds with a more straightforward manner which leaves breathing room for stories that require no dramatic embellishment.

The race selection itself is worth noting. Personally I docked them half a star for lumping Liège-Bastogne-Liège and La Flèche Wallonne into a single chapter, and the Grand Prix of Frankfurt (a/k/a Eschborn City Loop) doesn't make too many short lists of the World's Greatest Classics, not when E3 Prijs Harelbeke and the Giro dell'Emilia are left out. Oh, and some of the races aren't in spring. But I loved the inclusion of Bordeaux-Paris (and would have loved to see Paris-Brest-Paris included) as a vehicle to explain the evolution of the classics. And I mourned openly the loss of Zuri-Metzgete, last run as a pro tour event in 2006, with each stunning photo. Anyway, apart from these less obvious inclusions, the bulk of the book covers what you'd expect, and if they issue a second printing expanded out to 1500 pages to give these magnificent events a full telling, you won't hear any complaint from me.

But the real stars of the book are the photos. It would waste your time for me to describe them in any comprehensive way, for if you know the classics, you know what pictures to expect. Muddy faces, broken wheels, beautiful landscapes, arms raised in ecstasy at the line, and so forth. But the part I appreciated most about the photo spreads was the common thread through the years' worth of pictures of a particular race. The Tour of Flanders from 1950 looks nearly identical in its basic character (if not every last detail) to the 2010 event. The Passo Turchino, the Milan Cathedral, the Ave de Grammont, the streets of Namur, the scenes along Lake Como -- the same places we celebrate now once hosted Coppi and Girardegno and Schotte and Hinault and so forth. These races aren't merely awesome, they're timeless too. The Spring Classics doesn't awe you with a new way to tell these stories; instead, it respects the wondrous material with which the authors were working by letting it breathe.