The race in Niel is a standalone one, but one that sees all the top guys (with the exception of Ian Field) show up anyway. Why? Well, for the past 60-something editions they've had the World Champion at the start line, which is a tradition they plan to uphold. It's a pretty simple race, with long straight stretches and minimal cornering (so, about 30 per lap). There's one nasty hill which caused some Albert vs. Nys controversy (well, more like Albert vs. members of the public controversy), and that hill's the main obstacle to worry about.

The above description comes from the CX calendar and, one week after it was written, it's already outdated. Yesterday, reigning world champion Zdenek Stybar announced that he won't start in Niel. He has a blockage in his lower back, which radiates to his left knee. The injury isn't too serious, but Styby doesn't want to take any chances. He should be ok for Sunday's Superprestige race in Hamme-Zogge.

The startlist doesn't know yet, but the organisers got an excellent replacement in Ian Field though. 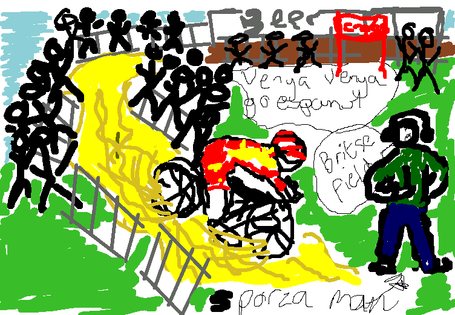 You'll recognise the excellent artwork of Helen Wyman, who will be racing herself too, so there's the potential for more crayon recaps. The more crayons, the better, I always say. Helen will be battling most of her major opponents, except for Dutchie Sanne van Paassen, who says she's "ill, weak and nauseous", which doesn't sound like a fun state of health.

The weather is fairly shite here, which is awesome for cross. This satellite thingy predicts that most of the rain will have passed Niel by the time the race starts, but those things are always wrong. Besides, it's been raining for days so at least the ground should be nicely muddy.