Share All sharing options for: Offseason Team Capsules: BMC On the Hot Seat 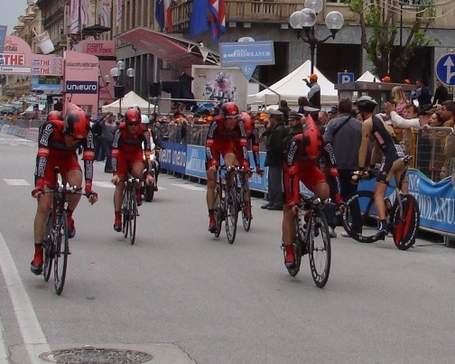 Yep, it's that time again. Let's face it, the 2011 season starts in either two or 3.5 months, depending on how you feel about races in January (yeah yeah), and December is something of a wipeout in my life. So if this project is gonna happen, it has to start now. I may tinker with the format as time goes on. Anyway, let's get a measure on BMC's 2010 campaign and start the process of projecting ahead for 2011.

My hunch is that if you were to ask them, they would defend their season as successful, and not without some reason. First, inside a team the mass turnover probably feels more profound than it might look from a distance. New bikes. New faces at breakfast. New ways of doing pretty much everything. It takes time to gel. So if we try to hold them to the same standards we hold the more established teams, there might be some disagreement; they were just trying to get to know each other for half the season.

And what exactly was the goal anyways? You can look at certain teams, like Quick Step or The Shack, and pretty quickly identify the team's major goals for the season. BMC's season seemed oriented around the spring classics -- a worthy goal -- but in reality I got the sense that  team goals were something that also needed to evolve over time. The lineup consisted of a collection of riders with various talents, but no sure bets anywhere. This script didn't write itself. So just narrowing it down is progress. Anyway, without further ado...

BMC have a long-term plan, apparently, to join the big show, and DS John Lelangue has chosen the classics as a way to ratchet up the progress...  I am not predicting that BMC will break the QS stranglehold, but by sending out not just one guy who can win but three or four, they have a chance.

Incremental progress, a good idea of what they don't have yet, and the need for a do-over.

The team has a few agenda items to work on besides its April squad, like bringing along some talented youngsters. Towering figure Michael Schär is the captain of the BMC basketball team, at least until Taylor Phinney arrives, and got another year of cobbles under his belt. Mauro Santambrogio took a step closer toward being a top-flight climbing classics contender, with 8th in Lombardia and a near-miss at the Coppa Sabatini. Brent Bookwalter approached his prime years with some eye-popping time trials and completed his first Tour de France. Baby-faced Chris Butler arrived in time to get his feet wet. Nothing to gripe about here. Mathias Frank bagged the KOM at the Tour de Suisse -- a nice haul for a 23-year-old Swiss kid -- before bad luck struck.

As for what they don't have, that would be a grand tour threat. Cadel Evans' Giro performance -- fifth with a terrific stage win -- was as good as it got for BMC in high-profile stage races. Extrapolating that over to the Tour... isn't pretty. Worse, the Tour of California didn't really give George Hincapie a chance to do more than stage-hunt, and one of the team's biggest goals of the season passed by all too quietly. Evans may have another big grand tour result in his legs, and the team has the worker-depth he would need in that event, but mostly the team looked irrelevant to the GC battles this year.

And that do-over, that would be the cobbles squad. Losing Alessandro Ballan in the lead-up to Paris-Roubaix had to have royally sucked. It's not hard to imagine very little happening regardless, but Hincapie is a better bet to hang around the front of races like Flanders and Roubaix, waiting for an opening amidts team tactics, than to just saunter away from Cancellara and co. on his own. The plan was to get numbers up the road, but Ballan was home huddling with his lawyers, Karsten Kroon was back in the pack, and Hincapie and Marcus Burghardt never quite threatened the heads of state. Hincapie was obviously on form, running 4th in Gent-Wevelgem and 6th in Flanders, so 29th a week later has to have disappointed him.

Signing Phinney doubles down on both the youth movement and the cobbles teams, at least in 2012 or so. Perhaps Phinney, Burghardt and Ballan will be slugging away at the stars of the 2014 edition of Paris-Roubaix, but that's a long, long ways off. Greg Van Avermaet and Manuel Quinziato add to the numbers on the cobbles squad, while Amael Moinard, Johann Tschopp and Ivan Santaromita add depth to the stage racing and hilly classics team for Evans and Santambrogio. Yannick Eijssen may be the next BCS, and snatching him from Quick Step and Omega Pharma is a coup, even more so when you consider that HTC were after him as well. But he's 21, so... we wait.