So, it's been raining here in Belgium. Quite a bit. So much, in fact, that at least one national soccermatch has been cancelled, houses are flooded, streets are flooded, roofs are collapsing and provincial disaster plans are in place. They're calling it the worst floods in 50 years. 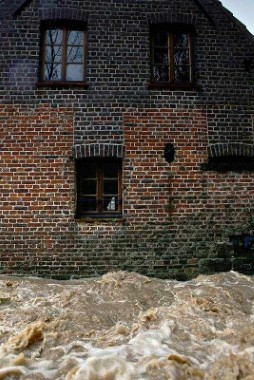 No worries though, cross is tougher than that. The Superprestige race in Hamme-Zogge will take place.

The course has been redesigned completely, so it's a bit of a mystery what it's going to be like, but I can tell you that there are three bridges (hurrah), one staircase (hurrah) and a sand pit (hurrah!). The parcours loops around, over and under itself, so it'll be lots of twisting and turning.

That's the description from the CX calendar thread. But, though the race will go on, the organisers have made a good amount of modifications to the course. One entire meadow has been scratched (flooded), one sandpit has been emptied and they've opted for more asphalt. None the less, the organisers are calling it a race for workhorses.

A HTFU-race for workhorses? Sounds like something Nys will love. Sven has been in great shape the last few weeks, and will no doubt hope for another Superprestige win. Albert is getting better and better too, so hopefully he'll be up for a Nys-challenge. Styby didn't race on Thursday because of a blockage in his lower back, let's see how much he's still suffering from that. Ian Field is ill, and has opted against participation. No sense in risking it all and possibly missing Koksijde.

Hamme-Zogge is a Superprestige race, so it'll all be live and legal on http://superprestige.vt4.be. Coverage starts at 14h30 CET and lasts til 16h25.