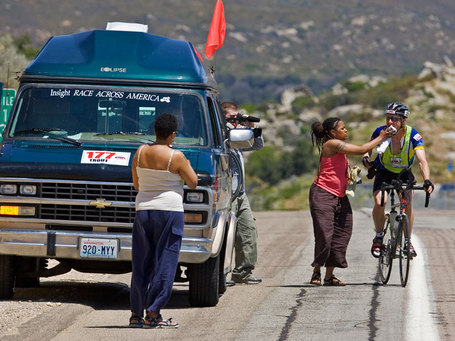 I spoke with Bicycle Dreams creator Stephen Auerbach by email for some additional thoughts on his film.

PdC: This is your second cycling film, I believe? and your second concerning the RAAM. How did you come to take an interest in the RAAM?

SA: I am a storyteller. That's what I've always wanted to do, and be. When I learned of RAAM and it's dual qualities of being little known (obscure?) and monumental in its challenge I was hooked. The fact that these were 'average joes' doing the impossible, made it that much more appealing.  Everyday people - Clark Kents, so to speak: fireman, salesmen, doctors, teachers, etc. Combine that with the fact that there is little or no prize money and the recipe began to form for a striking story. Where better to find true heroism than in those who are ordinary on the outside? The appeal is stated in the film: the chance to document ordinary people doing extraordinary things.

I also feel that RAAM chose me and it was my destiny to tell these stories; specifically the stories of Bob Breedlove, Jure Robic, Chris MacDonald (and if you saw my first film David Haase and Randy Van Zee). It became a calling of sorts to do justice to these monumental figures. The beauty and strength of humanity was on display upon the country roads of America for two weeks ever summer and I wanted so much to elevate this underground phenomena to the semi-mainstream. These are pioneers, much like astronauts, psychic pioneers, physical pioneers, spiritual pioneers, so these films are my equivalency of The Right Stuff. That film told the story of the race to conquer outer space. Bicycle Dreams tells the story of the attempt to conquer inner space.

SA: Bicycle Dreams is about the human soul, fate, loss, triumph, irony, etc.  It's a story of humanity in its' most naked form. There are no secrets in this event. All is exposed. From the raw nerves to the ultimate sacrifices. There is an alchemy that I wanted to chronicle for an audience. The alchemy of hard work meeting true desire (mix in a little faith) which transmutes into nobility of spirit and intention. Courage is a great attribute to document.  Sports allows this.  No sport allows this better than ultracycling and no event than the toughest on the planet: Race Across America.  Ultimately the film is about the human heart and what it is capable of.  In the first film, RACE ACROSS AMERICA I was along for the ride. Witnessing and sponging up the emotions and actions.  In BICYCLE DREAMS I was intent of using my own courage and faith to make a film that matched the subject. I became one with the film in some strange mystical way. I wasn't just trying to tell a story in this film - I was trying create a 3-d experience for the viewer to immerse themselves in. The ultimate reality film. That is why I made the creative decision to have absolutely no voice over in the film, and to only use footage from the day of the race in which it was shot. Bicycle Dreams was designed to be an x-ray, or an MRI of this race and of the human soul.

PdC: While I wouldn't compare your situation to the riders, this must still have been a pretty grueling experience for you? Were you up all hours for the two weeks or so covering the race and the days right before and after? It seems like the story can really unfold at any moment, and the riders are going close to 24/7.

SA: Yes, sleep is the enemy for the rider and the filmmaker.  I had two stretches where I stayed awake working for 36 hours at a time. Interesting mental states accrue. I needed to match the intensity of the cycle warriors I was trailing.  One cannot be a phony in this arena, and one must be all in.

SA: Yes, it's psychological like having a baby or losing a loved one is psychological. This is the raw stuff of existence. It's like being a political prisoner. How much can you take. What mental pictures will you create to survive the torture. It's a trial, a challenge. And like many challenges in life, the obstacle is often one's self.  That's where this race takes on a religious or spiritual component. The self can be a slayer. Wrong thinking can undo the best intentions. You have to get yourself right to succeed. Bottom line, no one can do it for you. You're all alone with your demons and your angels. Which will come closer to your heart? That said, RAAM is a truly insane physical challenge. Pioneering territory. Scientists have studied its effect on the human anatomy.

PdC: The title Bicycle Dreams -- can you describe what the "dream" element is? Is it different for every rider?

SA: We all have dreams, and connecting to them in a productive way is a key challenge of maturity. The dreams in this film are about self actualizing; finding ones highest self and embracing him or her. Living in the moment. Becoming clear, pure, etc.  And why this title, because "Bicycles" become, literally the vehicle to confront one's dreams, dance with one's dreams, to even become one with one's dreams. Ultimately, the bicycle is the means to realize one's dreams. We all need something. For me it's a camera and an editing system. For other's it's a sailboat, an airplane, a child, or a Pinarello!

PdC: One or two of the participants seem to talk a bit in terms of Buddhist concepts of desire. One in particular, Tom Rogers, talks of the need to destroy desire, which suggests that the riders are doing this event to put an end to some sort of suffering. Is this just one rider's view or do you think it has broader applicability?

SA: Tom Rodgers is talking about the ego and that it doesn't like suffering - well no shit, right? I for one do not subscribe to the idea of destroying desire at all. I love my desires. If they cause me suffering it's because I'm too much of a chicken shit (or damaged goods psychologically) to do anything about having my desires realized. Chris MacDonald talks of embracing one's true desire and working with it as the only pathway to realization and glory. I agree. But your broader question is are the cyclists dealing with suffering through the race and I would have to say yes to that. It's not ordinary to ride one's bicycle like these folks do. What makes someone need to spend that much time out there on the highway, and often alone? My answer is that they have a bubbling cauldron of emotion within themselves and riding helps them understand this mass of emotion - conflicting, healing, maddening, etc. They need this extreme exertion to find a stasis point where they can breath in a harmony of sorts with their surroundings. These are extreme individuals, but the finest individuals I have ever come across.

PdC: The film takes advantage of the natural beauty that abounds, especially in the southwest. As a filmmaker, what was your objective concerning capturing the landscapes?

SA: The landscape speaks for itself. Point and shoot. Whatever majesty we humans can muster is mirrored and magnified by the glorious continent we live upon. And for us, it's a short while - four score years?  Yet, the continent is ageless (just about). To really breath in the landscape is to be educated in the finest university known to man.

PdC: Bob Breedlove's death was a very tragic, sensitive subject, but obviously as the filmmaker this became a big story as well. Did you struggle with how to balance that story within the film? Did the participants and their teams have difficulty with you capturing their emotions and their reactions, or did they accept that this death overshadowed what everyone was doing and thinking (assuming it did, that is).

SA: Yes the death overshadowed everything. It was traumatic beyond comprehension. He was the most beloved figure in the entire sub-culture of ultracycling. I don't really like discussing this element of the film. It needs to be experienced directly, first hand. I will say this: I take some consolation in the miraculous fact (little known for sure) that Bob Breedlove was most likely looking at a small white church on the hill before him as he met his demise. I stood on the sport where Bob passed not twenty minutes after the tragedy and one's view was filled by this church. That, to me, was highly significant.

PdC: and finally... what projects are in the cue for you? Any more cycling ones?

SA: All kinds of projects. I'm hoping to complete a film about rock and roll this year that tells a story of these great artists that nobody has yet told. It's a very unique take. As far as cycling I have another film that is shot and in the can as they say. I don't yet have funding for the edit and if none comes through I will do it without funding. The tentative title of this film (designed to be the final film in the Auerbach cycling trilogy) is STAY ON THE BIKE.  But we'll see, titles are shifting things.

Photo by Chris Milliman, Used With Permission. Check out his very cool website.