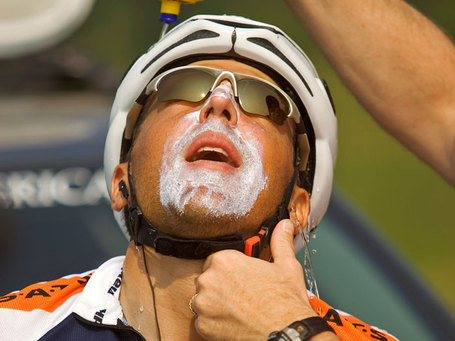 Permit me to make a few sweeping generalizations. Ball sports thrive on things like adrenaline, cameraderie, and the thrill of doing something that isn't especially easy, like sinking a jump shot from 23 feet with a hand in your face. Sometimes you come across an athlete whose ball sports connection is part of a personal, even spiritual journey, but almost nobody comes to mind. It's about having fun using your body in challenging ways. 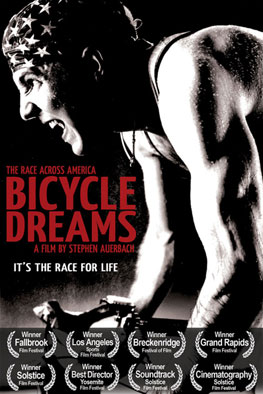 Endurance sports are also about having fun with your body, but cycling (for example, since I know nothing of runnin marathons) has an almost entirely different language. Ever hear a baseball pitcher talk about "entering the pain cave"? Or a football player connecting his love of the game to cherished solitude? Not bloody likely, but these are concepts you hear mentioned in even the lowliest cat-4 (cough). The love of the grind, of bad weather, of the next day's soreness, are all hallmarks of cycling you only hear occasionally mentioned in other popular sports. The concepts are shared, like say in an especially muddy football game, but the degree is completely different.

Bicycle Dreams, a film by Stephen Auerbach, goes deep inside one of the world's most confounding human activities, the Race Across America (RAAM). You've seen the RAAM on TV, most likely, filmed as if it were a bicycle race. But the problem with those films is more than the lack of recognizable cycling action; it's that they can miss the point. The RAAM is to a bike race what cycling is to baseball: a far different animal, a battle which is played out much more inside the person than on the battlefield. If you thought the life of a bike racer was an internal struggle, wait til you see what Auerbach unearths in the RAAM.

More on the flip... and a chat with Auerbach, below!

Auerbach is a documentary filmmaker with a quirky resume. His signature stories, like The Circus Comes to Town about Depression-era circuses or The Memory Box about the battle against poverty in Ethiopia, aren't likely stories you've already heard before. So when he got hooked into the subject of the RAAM as a great story to tell, it took a couple tries to make truly significant headway. His 2005 film Race Across America was an entry into the world of ultraendurance cycling, and as Auerbach tells it he "went along for the ride." With Bicycle Dreams, Auerbach took a much different approach -- no voiceovers, not much emphasis on the progress of the race itself or the full field of riders, using instead an all-hours, all-access approach to a selection of riders who enable the film to tell the real story of the race, the individual journey of an athlete doing the unthinkable.

Through interviews and on-scene action from the road, the support vehicles, and the stops along the way (for 20 minutes of sleep or a hospital visit), the film makes an unprecedented exploration of the subject of suffering on the bike that goes beyond the unmistakeable bit about riding 3000 miles in 12 days that all other RAAM coverage is centered around. Yeah, I knew that ultraendurance athletes like to challenge themselves, but years of network TV had me thinking that this was mostly a bike race. Not true, really. I'm sure the riders would like to win, but when the film really probes their mental state and their desires, it's about finishing. It's about the experience of pushing yourself that far, to the point where you fall asleep while pedaling or can't form a mental image of your own family. When one of the riders, the beloved Dr. Bob Breedlove, is killed in a collision with a car, it not only adds a tragic arc to the film (most of the riders and caravans are utterly grief-stricken), it also ups the psychological ante on an already seemingly self-destructive journey.

There isn't much of anything I can think to criticize about the film. It's shot beautifully, the concept is dead-on for the subject, the work done by the film crew is cool as they go round the clock to capture the story, seemingly inspired by the subjects to get past their own exhaustion (right?). The missing element is what comes of the suffering. Are the characters transformed after crushing their bodies over the roads of the country? If they aren't, why? If they do it once, why do they do it again? For this a follow-up will be needed, and that may well be in the works.

The film's trailer speaks for itself. Enjoy.

Photo by Chris Milliman, Used With Permission. Check out his very cool website.