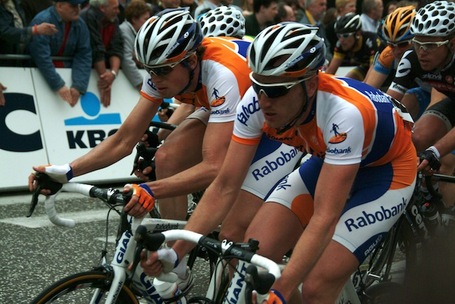 Everyone knows I'm very interested in Rabobank. Maybe a little too interested. Laurens Ten Dam has stopped returning my calls, Lars Boom has blocked me on Twitter, and Bauke Mollema... let's just say the judiciary has been on his side (lousy biased cyclist judges). Everyone tells me it's for my own good: Superted, my wife, Breukink -- but when Rabo grow up and win 100 races from grand tours to the monuments, all in a season, I'll be able to say I was in on it from the start. Back when they were kids. In the media sense, I raised them from pups. Who else in the English Media has talked of hegemony? Who else named their cat Bauke? Name one!

15 of the 27 riders on the 2010 Pro Tour Team roster have roots in the development system, and that doesn't account for the ex-Rabo CT stagiares who've turned pro with other teams. Robert Gesink is the standard-bearer for Mollema, Boom, Leezer, Stamsnijder, Reus, Weening, etc. Sebastian Langeveld is the only prominent Dutchman on the squad with no ties that I can detect to the development team... and of course the foreign stars like Menchov, Freire and Nuyens came by alternate routes. Much is expected of this young home-grown crop, and if they continue progressing, if they can pull the country out of its cycling funk and catch up to their high-flying Belgian and Luxembourger neighbors, the Rabo development team will go down as one of the sport's wiser investments in some time.

Basically, it's all about the project. Well, and Menchov going for the Tour podium. And Oscar Freire scoring the odd sprint win, usually on especially hard days.

Another ring of growth on the Rabo tree. The positive spin on Rabobank's development is centered around the idea that young legs need time to grow and harden. Each season is like a year in the life of a tree, adding another layer that's denser and tougher than the last. With eleven riders on the main roster born in 1985 or later, including several of the top scorers and emerging stars, it remains important to view the team's performance through the lens of development. In this respect, the season has to rate pretty solidly -- depending on what kind of steps you expect of them.

Two riders, Robert Gesink and Bauke Mollema, made undeniable progress this year and have to be very pleased with the results. Bobo has long been tabbed for Tour de France leadership, but he crashed out of his only Tour start in 2009. In that respect, his sixth place this year is pretty damned impressive. And he's still just 24. He also won the Montreal GP and the Giro dell'Emilia for the second season in a row, and seemed ready to go on an autumn rampage, when he pulled the plug on his season after his father's tragic, fatal bike crash.

Mollema, meanwhile, is a mere eight months younger than Gesink but in many respects is just getting started. His first grand tour run ended with him finishing 12th in the Giro (3rd in the young rider comp). He won the queen stage of the Poland Tour in an uphill attack, enough to put him on the podium. Like Gesink of yore, he rode well in the fall classics too, portending a bright if slower developing future than his captain. 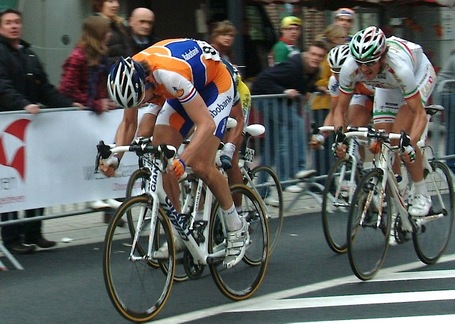 Lars Boom is the third member of the young guns, and his development is a bit more debatable. Optimists (hellooo!) see positive, difficult steps forward in riding and finishing his first Tour de France; a strong fifth in the E3 where after the heads of state (Cance, Boonen, Flecha) Boom nearly outsprinted Filippo Pozzato for fourth; and a stage win in the Paris-Nice prologue. But he cracked after 200km in Flanders, his likely future top target, and sagged further in Paris-Roubaix. At almost 25 Boom's development seems slow to some fans, I gather, and more than his illustrious teammates Boom seems locked in combat with the dreaded expectations that come with, oh, winning the cyclocross world championship, U23 world time trial title, and doubling up on the road and time trial national champs -- the Senior Elite ones -- by age 22. Boonen won at 25, right? Why isn't he doing what Boonen did? Because everyone's different. And oh by the way at 24 Boonen finished an anonymous 25th in de Ronde. He also rode and finished his first Tour later that year -- 2004 -- and the rest is history.

Apart from the kids, Rabo saw their points and victories drop slightly from 2009, when they fattened up on both at the Giro d'Italia. A more subjective assessment might show that this year was at least as good as 2009. Compare their wins:

So what season impresses you more? The big point drops were by Menchov and Brown, but Brown and his wins are B-list stuff, and Menchov's third in the Tour behind Contador and Schleck is a bigger result than beating Danilo DiLuca and his angelic urine in the Giro. For me, 2009 spoke little about future success, whereas 2010 showed healthy progress toward the future and some huge results in the present too. 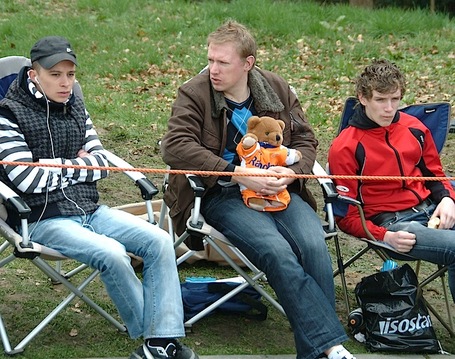 Onward. There's a bit of teeth-gnashing going on over the signing of Matti Breschel from Saxo Bank. Boom apparently sees a guy with his same skills and thinks it's not gonna be good for him. A lot of us have disagreed with Lars, because Breschel is a Grade-A classics stud that any DS would LOVE to have just signed on the cusp of his prime, knee injury or no. What one reads into Boom's reactions and his subsequent cyclocross (vanity?) pursuits is a matter of debate. But Boom needs to deal with his own progress in order to enter the conversation for the biggest classics before he can complain about finding a teammate up there with him. Which most of us think is a good thing.

Gesink is now cleared for takeoff, and has a slightly older, slightly lower-ceiling'ed Luis Leon Sanchez to join him and Mollema in a joint assault on the Tour. At least, I presume Rabo have signed LuLu for the biggest races, not to launch him at Paris-Nice and the Vuelta. Anyway, assuming Gesink puts aside his grief or channels it into hard work, 2011 looks like a potentially huge year for him, for the team, and for the whole Rabo long-term master plan.