Yes, that's right. It's finally time for one of the most epic cx races of the season: Koksijde. Those of you who know where Koksijde is will get why it's so great almost instantly. Those who don't: it's at the north sea coast. Yep, that's right. They race on dune sand. It's awesome.

Now, the parcours has been redesigned this year so I don't know the specifics about it either. 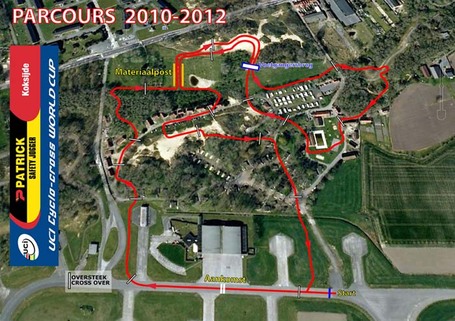 Plenty of sand bits left though, so it'll still be great. Also, it's freaking freezing in Belgium (literally), so the ground will be part rock solid and frozen (forest, meadow), and part mushy beach sand.

Koksijde is a World Cup race, which means fewer Belgians at the start than at a normal race. Van Thourenhout and Van Thourenhout weren't selected to be part of the 8 men team, so there'll be less confusion too. Complete entry list: here.