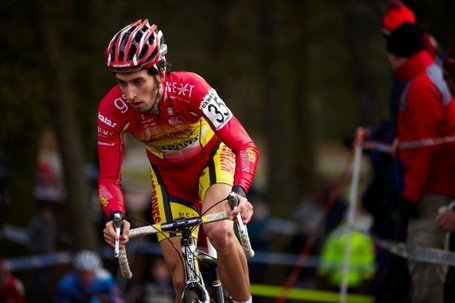 During the cross season, Ian Field lives in Oudenaarde just four kilometers from the Koppenberg. Britain isn’t known for its cyclocross racers, but together with his housemate Helen Wyman, the twenty four year old Field is steadily rising through the pro ranks. At last week’s Koppenbergcross, he finished 21st, just outside his top twenty goal. When I talked to him before the race, Field correctly predicted the winner, Sven Nys. His best finish so far was a lucky thirteenth at the Namen GvA earlier this season.

Who is Ian Field? Here’s your chance to learn why he loves cyclocross (it’s not the mud), how he supports his ambitions, and what he considers his dumbest race day mistake. Also, Fieldy admits that he doesn’t really like tea. Take that, national stereotypes! 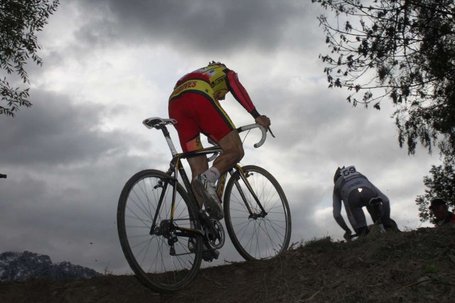 Ian Field started out as a mountain bike racer. He discovered cyclocross when his friend Nick Herlihy wanted to start up a school team. Field went along to the school trial, and "it went from there." He continued racing fat tires for a time, but when his funding from the British cycling federation ended, Field decided to go full-time into cyclocross. Fortunately, he received a generous sponsorship from Hargroves Cycles. "Without Pete Hargroves, I wouldn’t be a cyclist right now," Field said, and he credits his sponsor with giving him the chance to race full-time.

Why cyclocross? "I like the technical aspect of it," explained Field of cyclocross. "You have to be an all-around bike rider. On the road, you can get away with just being a big engine and brute force or natural fitness abilities will allow you to win races." In cross, you have to have skills. After all, cyclocross bike isn’t all that different from a road bike. "Being able to ride what’s practically a road bike fast off road is really cool," he concluded.

And he gets plenty of practice, thanks to the course Stef Wyman built up for Helen Wyman and Field. Field went to Belgium a few seasons ago and stayed with the Wymans. Belgium is quite different from Britain, Field reports. Oudenaarde is "pretty damn quiet, but it makes it easy to focus on riding a bike. 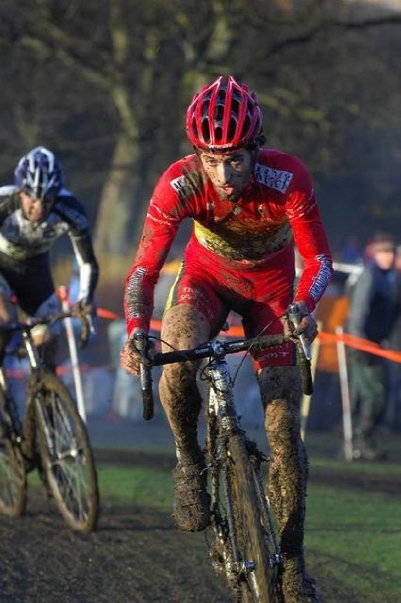 Belgium is very relaxed and everyone keeps themselves to themselves," he explained. For Field, the connnection with Stef Wyman has proven central to his success. "Basically, without Stef, living in Belgium would be virtually impossible," Field confirmed. Wyman helps with bike prep and provides the all-important pit support. In cyclocross, riders have spare bikes in the pit in the event of mechanical problems. A reliable pit crew is totally essential.

Wyman also helps Field get start money at the races. The top level guys like Stybar, Nys, and Pauwels are much in demand with the race organizers and their agents negotiate their start money well in advance. For Field, who is just getting started, the process is more difficult. "It’s one race at a time for me," he said. "We contact one guy who tries to get me start money for all the major races in Belgium," Field explained. Then, there is a separate service based in the Netherlands that represents him for the other races on the calendar. Despite their efforts, start money is still "pretty hard to come by."

Every course is different on the cyclocross circuit. "I love the fact that it’s the same sport each week but so different each week at the same time," Field said. He does best on courses with good amount of climbing and sloppy, muddy conditions, but his favorite is Koksijde. Sand dunes provide the defining feature of the course at Koksijde. "I wouldn’t like that every week," but Fieldy called it "an amazing race." "Koksijde is also helped by the fact that it’s really close to the U.K. for people to come over and cheer me on," Field added. It’s all about the cheering section.

On the whole when it comes to courses, "the tougher, the better" is Field’s mantra. So Koppenbergcross? "I love that race!" Last week marked Field’s third attempt at the Koppenberg, and he finished 21st. And as Field predicted, Nys won. When pressed to name his best characteristic as a rider (really, he had a hard time with this one), Field named his acceleration. He’s also rather determined. "I want to beat everyone I race against," he said. 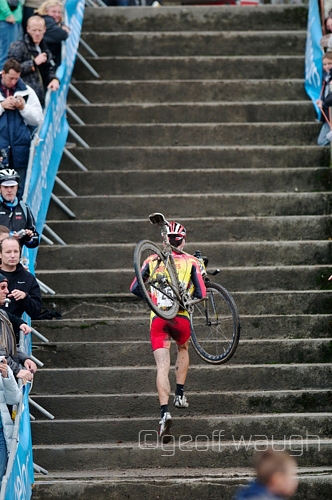 The British rider doesn’t look up to anyone in particular in the elite ranks. "You can’t have too much respect for someone you’re trying to beat;" words to live by, if competition is your game.

During the summer, which is the off-season for cross racers, Field races road. Though he still goes out for mountain bike rides, he believes that road provides a better foundation for the cross season. "The speed and the different strengths needed just make you a better cross rider," Field explained. He doesn’t train by numbers. "Wattage meter, what’s one of them?" he quipped. Actually, a set of SRMs for his bikes tops Field’s wish list. "I would love a set of SRMs, but it’s stupidly expensive," he said. And to get the most benefit from the data, a rider needs a coach to help interpret it all. "I think you can get carried away with power and turn every training session into a test, which isn’t good," said Field of watching wattage too closely. Still, used correctly, the SRM data can provide a pretty useful training tool as Field well knows.

On the subject of bike parts, Field’s favorite bit of bike parts is carbon wheels. "You can put them on any bike and it makes the whole bike look good." Everyone knows that good-looking bikes are fastest. It’s been proven. "Look good, feel good, good good," quipped Field. The Hargroves rider has a rather nice looking Scott to make him look good and go fast.

Every bike racer has a life’s dumbest moment story. I offered up my own story in an effort to convince Field to share, because I have yet to meet anyone who can top my particular stupid bike racer trick. I once drove six hours, spend the night in a hotel, and showed up to a race on the wrong day. I guess I won, because I got there a week before anyone else. Field could not top that one, but he did forget his kit once for a local time trial. "I showed up with just my shoes and helmet in my kit bag." Naked time trial! Actually, he rode in the always stylish and aero t-shirt and shorts combo. In general, Field is a relaxed rider. Though he has his race day routine, he tries not to put too much stock in it. "I try and steer clear of stuff like that because what happens if at a race you can’t do your special ritual?" 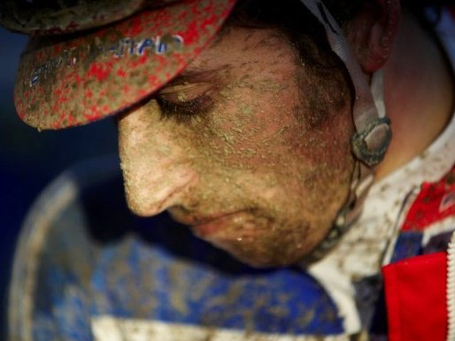 It’s totally over, unless you arrived a week early. Then, it hasn’t started yet.

Here are a few final Field facts. If Field does have a pre-race ritual, it’s rocking out to "Euro pop dance tunes" before heading to the start. "I’ve got this Euro dance version of Alice Cooper which always gets me going," he confided. If he could have a super power, he would be invisible. The last book he read was an autobiography of Russell Banks. If he didn’t race bikes, Field would be a motorbike racer, because "speed is good." And no, he doesn’t like tea. Field always drinks espresso, maybe because it’s fast just like him.