Share All sharing options for: Top Trumps 11: It's CycloCross Time!!

Inspired by tgsgirl's "who's who in CycloCross" article, I thought I should put one together for the key women....  and it's a long time since I broke out the old Top Trumps deck...  so welcome to 5 of the biggest names to watch in CycloCross!  I've already featured  4-times World Cross Champion, Hanka Kupfernagel here, and 3-times (and current) World Champ Marianne Vos here - but apart from those two superstars, who else should you be looking out for?

For this one, I enlisted the help of British Cyclo-Crosser Helen Wyman, as who better to tell us which riders are better at which races than one of their rivals?  The comments in quotes are Helen's one-line opinions of each of the riders -  she stressed they were just her opinions, not facts!  As always, my thanks to her!  Plus, there's a quiz at the bottom, courtesy of Tedvdw!   I really spoil you lot.... 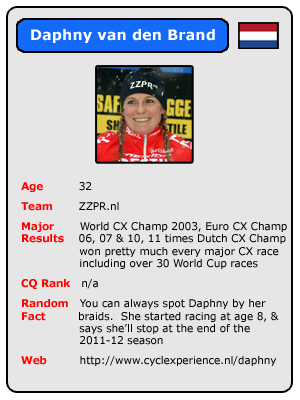 Daphny van den Brand is probably the easiest rider to spot out on the course.  For one thing she's won the Netherlands National CX Jersey so many times that those red, white and blue stripes are probably grafted onto her skin.  For another, she's tiny - at 158cm, only 1cm taller than Emma Pooley.  And finally, she rides with her hair in two blonde braids, making her look like a modern update of the pictures of Dutch women in books I had as a child.  Swop the clogs for cycling shoes, the cap for a helmet, and the pretty dress & apron for cycling gear that can withstand mud, wind, rain, mud, ice, snow and mud, and you have Daphny.

You can also spot her by the fact she's so often at the front of the race, especially when the race gets technical - any race with tricky corners, scary descents and crazy obstacles are built for her.

She's already said that this is her penultimate season of racing - but her ambition is to win the World Championships, and then race (& win in it for a year), as due to injuries she never really got to compete at 100% when she was in the rainbows for the 2003/4 season.  She's won it once, and has 5 bronze medals, so she'll always start out on the favourites list...  Hopefully we'll also see her on the roads in the summer - in 2010 she rode for Merida, including in the Flèche Wallonne and the Tour de l'Ardèche (where she came 22nd overall).

Daphny is the best technically on the racing circuit probably because she is so tiny!

More below the jump - and don't forget, Ted's quiz! 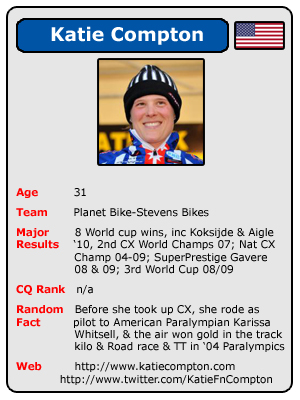 The next rider with her eye on the Worlds comes from the USA - Katie Compton!  And if you want to describe her in one word, it's POWER!

Katie Compton would have to be your top trump she is just sooooo incredibly powerful!!!! By far the top trump for me!
Power 10
speed 9
skill 9
endurance 10
Mental strength 10
Tactical ability - never had to use it as she wins by so fucking much!!
sprint 7.5!!! ha ha she cant be good at everything!!!

Compton started her cycling life as a tandem pilot for visually impaired cyclist Karissa Whitsell, and they competed together in the World Paracycling Championships and 2004 Paralympics, winning World and Paralympic golds on the road and track.  She competed individually on the track, coming 2nd in the 2006 National Championships, before turning to CycloCross.  2007 was her first season riding in Europe, when she won silver in the World Championships.  With 8 Cross World Cup wins under her belt, she's the most successful American Cyclo-cross rider, male or female.  After her 2009-10 season ended badly due to cramp issues, she's riding a reduced European programme this season, picking up her UCI points on the USA circuits, and only riding very targeted races this side of the Atlantic.  This is working in terms of results - out of the two World Cup races she's ridden, she's won both.  Summer, she rides mountain bike - and despite the fact her sponsor is pulling out at the end of this year, her results have to be good enough for that not to be a problem.You can spot her by her typically understated stars'n'stripes jersey, and her POWER!  Her weak spot is acceleration, but as she's so often off the front, that's not usually a problem! 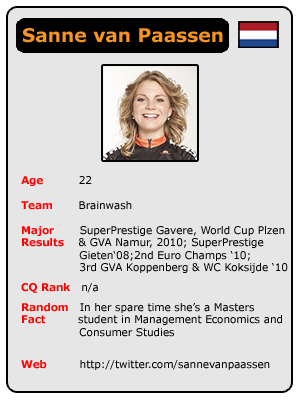 Although she's been riding for 5 years, this is the first season Sanne van Paassen has been riding for herself - last year, for example, she was Van den Brand's team-mate - and it's showing in her results.  She's having a great season, and has already won a World Cup, SuperPrestige and GVA race.  Her one-word description?  "Smiley".  She says her speciality is "perseverance"; Helen says

Sanne Van Passen has the fastest lap in the world and can hang onto anyone for that first lap, then rides her own race.

She started out riding as a child with her dad and his friends when they went out mountain biking, and went on from there.  She's got a great finishing sprint, and always looks like she's happy to be on the podium, no matter what the race and where she's come.  She also rides on the road - in 2007 she was part of the DSB team that won the Tour de l'Audee Team Time Trial - and this year she rode the Giro Donne for the Netherlands National Team, and came 15th in the u23 European Championships Road Race, which is no mean feat, especially given that she's also a dedicated part-time student.  Imagine what she'll be doing in a few years time, when she's finished her studies and is able to give 100% to cycling! 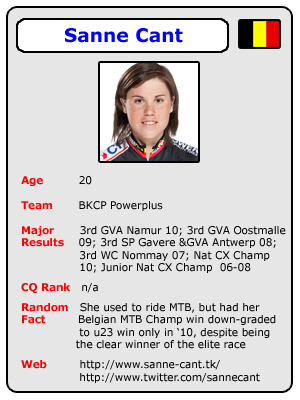 One of the anomalies of the women's cyclo-cross scene is that although it's dominated by the Belgians on the men's side, and all the major races are in Belgium, there aren't many Belgian women riding at the top levels.  Luckily, young Sanne Cant is changing all that!  So her one-word description is "Belgian".

Sanne Cant is really good on sandy courses as she lives in a sandy area and so has always trained there.

Cant is the Belgian CX Champion, and she should have been the MTB Champ as well, only for some reason, although she clearly won the race, the Belgian Federation downgraded her to u23 MTB Champion, even though that title technically doesn't actually exist.  She's moving on from that controversy, but it was part of the reason she moved from MTB to road as her 'Cross preparation.  She rode the Dutch & Belgian Crit scene as an independent, and the Tour de l'Ardèche (where she was 10th in Stage 1) and the Tour of Limousin (finishing 17th overall) for the Belgian National Team.  She's the only woman on the BKCP PowerPlus Team (the home of former World Champion Niels Albert) - and her contract is due to expire in December - cross your fingers that she's kept on, or gets an even better one, because she's a really strong young talent for the future, and Belgium needs some strong women Cyclocrossers!  There are some great photos of her 2009-10 season here. 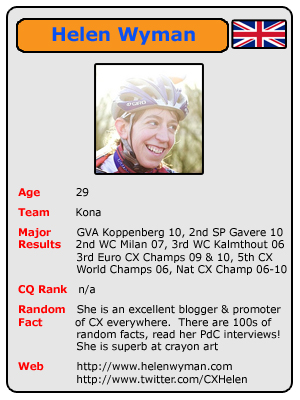 We've had Helen Wyman's opinions of the other riders, so now it's time for Helen herself!  I'm not sure what I can add to the interviews she did with us before and after she won KoppenbergCross - she even took a special pic with her cobble trophy, just for us! - what more can we ask for?  If the fact she's won on the Koppenberg, been interviewed here & made us crayon art hasn't convinced you she's your official Favourite Cross Rider Ever, than nothing will!  She also writes very funny blogs, and has a great twitter to follow.  Cross-wise, she's at her best in the extreme mud, and on the difficult courses - combine mud and difficulty, and she's very happy.

Who else should you look out for?

When it comes nearer the World Championships, we should see Hanka Kupfernagel upping her game as she aims for her 5th World title, and on home soil too.  Never underestimate Kupferngel, what she doesn't know about tactics ain't worth knowing

Hanka knows how to win a race more than anyone else.  At present she is just not quite on form. Plus Worlds in Germany, Hanka has to be favourite. When fit she is just a powerhouse who can sprint when required

Alongside the current men's World Champion, Zdenek Stybar, there are two Czech women you may see a lot of in the standings.  27 year old Pavla Havlíková is the tiny Czech rider - tinier even than Daphny! She's had a lot of success riding Czech races, and is a consistent top-5 rider

The Czech National Champion is a rider who's only recently started racing CycloCross in Europe - Katerina Nash.  By the time she was 18, she'd competed in 3 Olympic Games, in cross-country skiing and mountain biking.  Last year she won the 'Cross World Cup at Roubaix - and you can see some photos of her 2009-10 season here - and this year she's already been 3rd in the Plzeň and Aiglee World Cups   She moved to the USA in 2000, and is based in California, and riding the USA domestic scene when she's not racing in Europe.  It's her 33rd birthday next week, on the 9th - happy birthday, Katerina!

Katerina Nash is a very technical mountain biker and this year seems to have found how to use those skills in cross. She is a strong rider who recently beat Compton in a sprint in America. She is good on muddy slippy courses that require a lot of guts and lack of fear, like Roubaix!

These all should be names you've seen around, but do you want a wildcard?  Here's Helen's

Sophie de Boer could easily be a wild card as she is slowly this year creeping up a group of good results and is a definate little young tryer.

Sophie de Boer is 19 (20 on the 12th of December!), a Dutch rider who might get overlooked among the huge ranks of talent from the Netherlands.  She recently came 3rd in the SuperPrestige Gavere (watch her here!) and at the mudfest that was Jarmaarktcross Niel and she's been in the top 10 of most of the major races.  She definitely counts as "Watch This Space"!

Finally..... Marianne Vos, whose palamares shout HTFU at every other rider, male or female.  She's following her typically stellar road season with a winter that combines track AND Cross.  She's riding in Melbourne at the Track World Cup this week, then from 18th December having two months riding Cross, then heading back to the track in February.  Insane?  Quite possibly.  Fabulous?  Of course!  Her one-word description is "incredible", and although we won't know how her three-discipline season will affect her form this season, here's the Wyman-opinion

I guess she out trumps Compton in most ways except sheer brute force power!

Vos has many talents, but one of them is that the more important the race is, the more likely she is to win.  It helps that her motto appears to be ATTTTAAAAAAACCKKK!!! at all times, but if any rider knows how to bring their A-game for the races that matter, it's Vos.  5 rainbow jerseys and she's only 24?  Maybe this can be the year she manages the triple of track, 'Cross and road all in the same year?  If everyone can, it will be Vos, and I can't wait to see her back!

So, there's my run-down.  If you know more about any of the riders - or more riders I should have mentioned, add them in the comments!  I'll leave you with Helen Wyman's quick round-up

And now for your test - if you've been reading carefully, these should be easy, but can you identify the rider from Tedvdw's alliterative adjectives?

Top Trumps cards courtesy of Sarah Connolly; many thanks to tedvdw and tgsgirl for all the Dutch help, as always - and of course, a thousand thanks to Helen Wyman