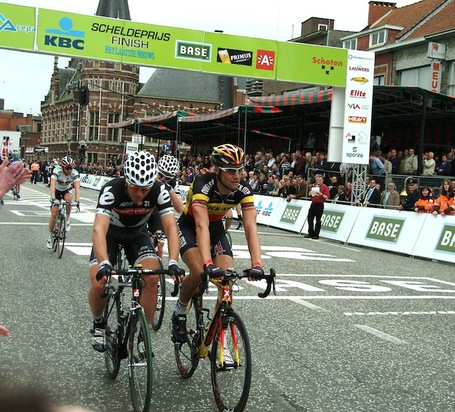 Cycling power ebbs and flows in interesting ways. Take Quick Step, for example. They're the last remaining vestige of the old Mapei powerhouse, a squad that set modern standards with 95 victories in 1997 and generally steamrolled through the 1990s with a special measure of dominance in the cobbled classics. Giorgio Squinzi's team bought up nearly every classics star they could get their hands on, and while that seems unsustainable, it at least created an aura of excellence that everyone seemed to want to experience for a bit. Their stable included Ballerini, Bartoli, Bettini, Bortolami, Museeuw, Steels, Vandenbroucke and Peeters, among others. And that's just the classics guys.

As Rome -- I mean Mapei slowly crumbled, Patrick Lefevre bought into the project with Quick Step as a secondary sponsor. Eventually Mapei had enough and the Italian management disappeared, but the Lefevre/Belgian wing lived on, and incorporated enough Italians to keep that strain running through the team to this day. Principally, though, Quick Step has been THE Belgian team, built to dominate a slightly smaller set of races. Watching the 2008 Ronde you would be forgiven for seeing jello squares bouncing around their kits, as Devolder stole away with little resistance, thanks to the presence of Boonen and the beating administered by Chavanel and others up til then.

But just as Rome was a big target for the invading hordes closing in on all sides at the end, so too have Quick Step been beset by their own foreign invasion. This was bandied about in Flanders in spring, the increasing inroads made by foreigners in their beloved classics. Foreign winners are nothing new, but more and more the presence of foreign teams was taking hold. Foreign fans were all over the race. The media pronounced it a healthy development from a cycling perspective. But there wasn't universal rejoicing, particularly around Quick Step quarters. And now as the project splinters further, Garmin and Cervelo have merged to form a team so loaded with classics studs that you might be tempted to compare them to... Mapei.

No team is more monotonous than Quick Step. Every year they set out to conquer March and part of April, downshifting after the cobble is lifted in the Roubaix velodrome into a second-rate bunch of stage hunters for the remainder of the year. When they make dramatic changes -- hiring Sylvain Chavanel or Gert Steegmans, say -- they merely reinforce the narrative. Even their kit, the navy suit/white shirt/red tie of cycling, barely changes. It's almost impossible to believe a team could be so narrowly focused, so when they start tossing out alternative storylines, it's very, very tempting to bite. I mean, nobody in their right mind would spend all that money on a team that is geared to race in earnest for five weeks. What are they really up to?

Their ambitions seemed as narrow as ever. In doing some research I found a quote from Lefevre that now serves as my sig line, from 2005. Tom Boonen had just done the double at the shocking age of 24, and Lefevre was plotting a course for the cobbles... grand tours be damned. "Next year we will build a strong team around Tom. We don't need pseudo-stage racers any more in this team." For years we wondered what would happen if they didn't dominate from mid-March to mid-April, but we never got beyond wondering as they took care of this limited business time and again. Until 2010.

The problem started not at the very top -- Boonen was on form and on schedule during this key period. He even came close to winning Milano-Sanremo for the first time. But he got outsmarted by Fabian Cancellara on three consecutive weekends back on the cobbles, and Lefevre trained his ire on his key lieutenant, Stijn Devolder. Devolder wasn't doing enough; wasn't covering his bases; was too focused on the Tour of Flanders. When a third straight Devo win in de Ronde didn't happen, Lefevre was left with nothing. No Belgian won anything in spring until Seb Rosselaer salvaged national honor in Brabantse Pijl. But the national psyche was positively rosy compared to Quick Step's. By season's end there were no shortage of ways to measure their failures:

But for Fabian Cancellara's historic form, we might be talking of a great year where Boonen trebled at E3, Flanders and Roubaix, narrowly missing MSR, and only slowing down to a knee injury. For years Boonen has saved Lefevre from greater scrutiny. Until now. Quick Step lacked not just an answer for Cancellara, but the depth to help Boonen at key moments, as well as a plan for anything outside of the classics. They are officially second-class citizens until further notice. And that's a sentence I never expected to write.

This section is much easier to write...

This leopard ain't changing his spots any time soon, especially since Alberto Contador isn't walking through the door. Actually, that alone may be a sign that Lefevre's luck is changing for the better. Had they invested their resources the way Lefevre intended, they'd be in a world of hurt right now. Instead, Lefevre has assembled a somewhat reinvigorated roster of classics guys in need of a change of shirt. Coming in are Niki Terpstra, Marco Bandiera, Gerald Ciolek and Francesco Chicchi, all reasonably young guys with talent and something to prove. If none come through, so be it, but as opposed to the enigmatic Devolder (Vacansoleil) and somewhat restless Wouter Weylandt (Lux), Quick Step should experience a bit more positive energy on the team bus. That's not a knock on Weylandt, a talented guy who will enjoy a deserved shot at more leadership. It's simply a reflection of the guys coming in, from teams like Milram and Katusha where the focus wasn't built around their best events. Expectations and pressure should be a bit more manageable, and if April doesn't go too well, they've at least increased their sprinting firepower enough to bag a few extra wins.

But the warning signs are still there. Quick Step haven't rounded things out at all. With a new sponsor just coming on, perhaps the plan will change in the next transfer season. Another issue worth mentioning is that the best young Belgians don't seem to be landing on their doorstep. This time it's Yannick Eijssen headed to BMC instead. I don't know if there was a backstory involving Quick Step, and in the past Lefevre has allowed kids to go train somewhere else, preferring to sign them as they hit their primes. But in need of someone to build around besides Boonen, Lefevre isn't harvesting the local talent very well. Apart from Gilbert the biggest name in Belgian cycling right now would be Jurgen Van Den Broucke, fifth in the Tour. For Omega Pharma. Lefevre may not care about pseudo stage racers, but real ones should be another matter.