Ah, December, when all Belgium is (hopefully) full of mud, and there's a great CycloCross race on pretty much every weekend day.  Although you will all know of the three big series of races (GVA, SuperPrestige and the World Cup) there are also standalone races to make us smile...  like today's.  What did gs say about it in her season run-down?

The Druivencross is known as the mother of all cross races, and it's one of the more prestigious standalone races. As a result, you'll see a lot of big names at the start and the race on Sporza. It's part forest, part field and they even throw in some cobblestones for good measure. You may remember it if I tell you that they ride the length of a soccerpitch each lap. Or you may not. That's also a possibility. You remember Lars Boom though, right? He'll be there.

Ah yes, the return of Lars "All the Belgians in the world can't stop me from winning the World Championships" Boom... and if that doesn't interest you, how about the report that it's very muddy?  And it's in Flanders, and has cobbles, mud, forest...  if that doesn't spell "happiness" then I can't persuade you any other way!

More info below - and as always, there are bound to be people here to watch the race with, ask questions of if you're new to 'Cross, or tell you how to say useful things in Dutch!

The Vlaamse Druivenveldrit aka DruivenCross aka Overijse (all races have at least 3 names) has a little bit of everything, as you can see from probably the best parcours map in the world (although longer-term Cross fans than me mourn the old course, which apparently was MUCH better) 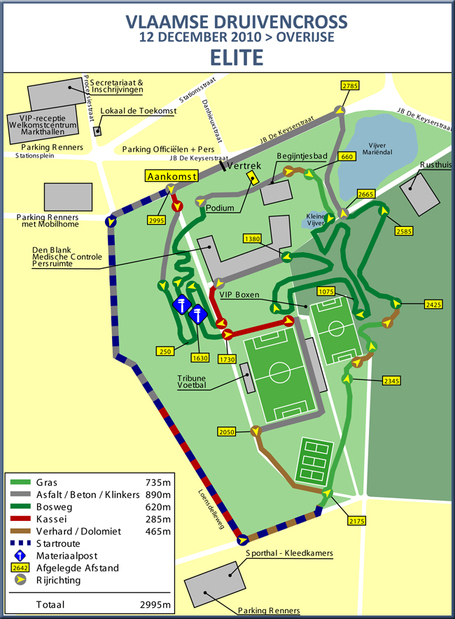 It also has the best riders in the World, minus poor old Styby, who spends his birthday weekend nursing his bad knee and wishing he was riding.  Last year the podium was topped by Niels Albert, who, after a puncture on the last lap cost him yesterday's GVA race at Essen, will be riding with something to prove.  But Sven Nys, second last year, also wants to win this one, and in post-race interviews said he was holding himself back yesterday, with Overijse in mind.  Then there's Kevin Pauwels ("yoah") - and a whole host of riders whose contracts are up for renewal at the end of the month - Klaas Vantournout's podium place yesterday must have been a help, but Sven Vanthourenhout needs some help...  All of the big riders have won this one - the Archief page of the official website has some great photos of the history, going back to the 1960s.  If you want to see some MORE history, you can always entertain yourself with the final laps from last year, 2008, or 2006, where Bart Wellens karate-kicked a spectator.....

Coverage starts at about 14:40 CET, or thereabouts, and will be streamed by all those anonymous folk who make my winter so much better.  There are links via CyclingFans and BVLS (scroll down, it's hidden under snooker & football) - and people here are very kind about sharing their links as well....