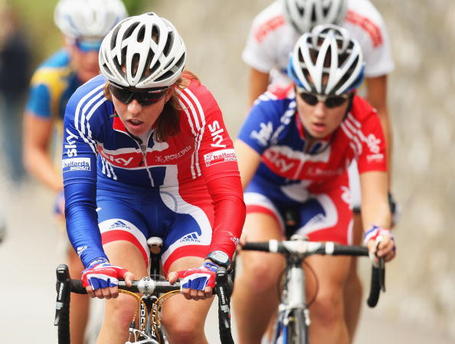 Nicole Cooke likely needs no introduction here. She has won a World Championship. She has won an Olympic gold medal. She's won multiple British National Championship titles and has three victories on the Mur de Huy. Last time we saw Cooke, she was off the front with Judith Arndt in search of another rainbow jersey in Geelong. We know how that story ended, of course, as Marianne Vos came charging up from behind with Emma Johannson and eventual winner, Giorgia Bronzini. With that last lap attack, Cooke showed her typical aggressive style, though this time, the prize went to the patient sprinter Bronzini.

The Geelong race came at the end of a difficult season for Cooke. Team troubles interrupted her season after Skyter withdrew from its sponsorship commitment. The move left Cooke, Neben, and the rest of the team's roster stranded without teams. Cooke's results not surprisingly showed the marks of this team turmoil. Already, the 2011 season looks more promising. The former World Champion has signed on to ride for MCipollini-Giordana in Italy. Nicknamed the Three Rainbows, the team boasts Cooke, Bastianelli, and Guderzo as its team leaders. It's a formidable combination, to be sure.

I had the chance to email Nicole a few questions about her new team and her hopes for the coming season. Below the fold, my friends, Nicole Cooke offers a few answers.

Your 2010 season was disrupted by the dissolving of Skyter/Nürnberger Versicherung. What was your reaction to the news that the sponsor was withdrawing? How do you deal with a setback like that?

Initially, when I found that the management had never signed a sponsor I did my best to help try and find a solution to the situation, so that the team could go on and I could ride with the team mates I believed in. Then as things developed and the management offered to the riders to race for free, I checked out my contract with my lawyer who explained that the actions of the management were illegal, not just breaking the UCI rules, but also breaking German Law. At this stage I left the matter with my lawyer, who went on to win our case, and I concentrated on finding a solution for 2010 and on my training for the new season. 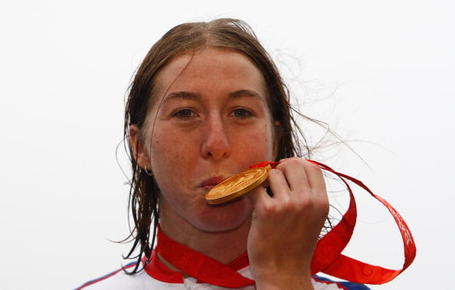 You’ve won many of the biggest races on the women’s calendar. What’s the best memory of your career so far? Of the races you haven’t yet won, which would you most like to win?

I have many highlights in my career, winning races as an U-12 were the biggest thing I could imagine at the time and meant everything to me. Then as my career progressed I began to prepare and focus my training and preparations on the ultimate sporting prize of the Olympics. Winning in Beijing was amazing, I felt so many emotions and in the moments after crossing the line I think every major event of my build-up flashed through my mind. There are also many great moments not linked to winning, helping team mates win or getting a personal best result, transmitting the excitement of sport to youngsters so they are inspired to follow their dreams, and the work I do with Action Medical Research Charity has also given me some very special moments too.

What do you think is your biggest strength as a rider?

I think physically I am an all-rounder, I can climb and sprint and enjoy racing on any terrain. Then one of my biggest strengths would be my mental strength to keep on digging deep, thinking and making split second decisions in races and the determination to go for big goals. 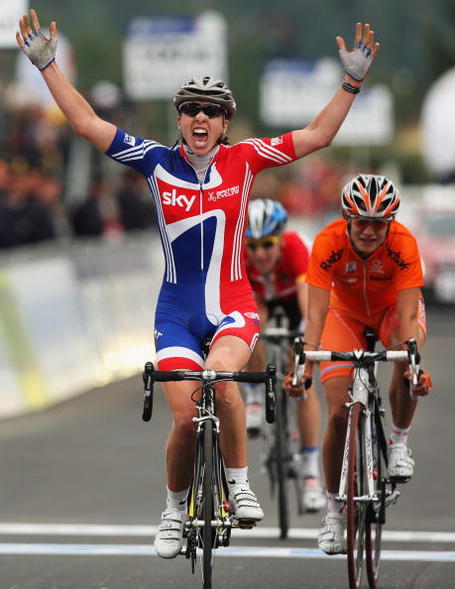 So you have a new team for next season, MCipollini-Giordana. What are you most looking forward to with the new "three rainbows" team? How do you think your strengths as a rider will complement the characteristics of Marta and Tatiana?

I’m looking forward to many elements of the team, it will be very exciting to see what we can achieve as a team this season as we have great individual riders, over the next weeks we will be working on turning that individual strength into team strength ready for the start of the season. Being in an Italian team, I am already enjoying the special touches that comes with this, the riders, sponsors, and staff are all deeply motivated and that came through in our first meetings in December, having spent many years based in Italy we all share ‘la passione’ that the fans, riders, sponsors and staff have for cycling.

Are there any races where you will expect to share leadership with others on the team? What are some of the ways you manage shared leadership at races?

I think there will be a few key races that each rider will have on their racing schedule where they will be the team leader and protected rider with the full support of the team. Then, on other occasions we may choose to race with two or three riders all ready to go for a result in the race. Like many times in the past, we all support each other making sure that as a team we always have riders present in break away groups or covering attacks and let the race naturally unfold with the confidence that as soon as one of our riders comes in to a winning position everyone else will be there to support that rider so they can do their best. 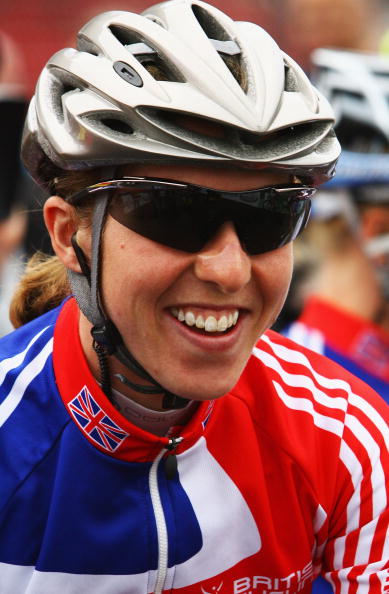 How do you feel about the ban on radios in races? Do you feel it has changed the dynamics of the racing at all? Does it change how you ride?

I don’t mind about the radios, it is the same for everybody. I think it will help bring all the team together to prepare as good as possible and race with confidence.

If you were stranded on a desert island with one book, what would you want it to be?

A book I’ve not read before, informative, and water proof. Then when I’m rescued I will be fully relaxed and hopefully, I will have learnt something useful ready for my next challenges...

What’s your favorite thing to do when you’re not racing?

Spend time with family and friends having lots of fun!

Want more? Roll over to Nicole's website and catch up with all her adventures.

Thanks to Gayle, @gayle_seren_pr, who forwarded my questions to Nicole and returned the answers to me.