Share All sharing options for: CycloCross World Cup Round 5:  Kalmthout

World Cup!  Yes, it's a shorter series, and not all the races are up to the awesome standard of Koksijde, but the World Cup is still THE CX series to win!  To be fair, this will be one of the good races (snow always makes for good racing!)  In her CX calendar, gs said

The Kalmthout website is pretty detailed, so I can tell you that, per lap, the World Cup race in the home of Kevin "yoah" Pauwels has 765 meters of asphalt, 260 meters of meadow and 1.625 meters of forest ground. It has 5 up- and downhill bits of 8, 4, 3, 3 and 2 meters. Last year it snowed so much that they almost cancelled the race, and Radomir Simunek lost his footing on one of the staircases and crashed pretty badly.

What else to expect?  More info below - and as always, tv coverage will start earlier - apparently half an hour earlier today - and turn up here for some conversation about/before/during the race.

As gs says, the official website has all kinds of information to keep you busy while you wait for the race.  I particularly like the parcours map (For a larger size, open it via that link) 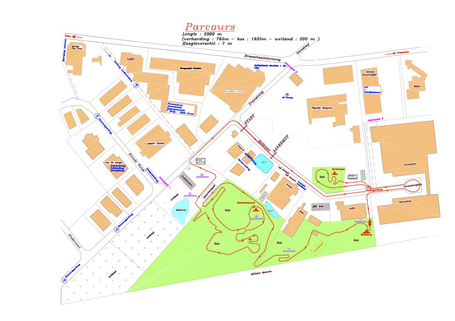 What does it tell us about the race?  Well, those straight stretches will be great for the riders who like to sprint, especially Lars Boom (should he be riding - he's only listed as a substitute) and Niels Albert - and Marianne Vos, in the women's race.  There looks like one section of boards to jump over (Can Nys bunny-hop in the snow?) and pretty much all of the green is forested sections - so twisty, narrow paths, good for technical riders, who'll be able to pick up a lot of time while everyone else is falling off.

As always in the World Cup, places-per-country are limited, and the Belgians are the ones to suffer, as they have the most riders in the normal races.  The full startlist is here, and the Belgian team is listed as Nys, Albert, Pauwels, Aernouts, Klaas Vantornout, Dieter Vanthourenhout,  Wellens, Meeusen & Rob Peeters.  Sven Vanthourenhout is listed as a substitute, but after his 2nd place in Antwerpen yesterday, he's had some glory this weekend. Mind you, Radomir Simunek won yesterday, and I don't think that'll stop him riding to win today!  Sven Nys is always a contender, and if he can avoid mechanicals and/or dropping his chain, he's alwys in with a chance.  I have no idea why the Dutch team are having Boom as a substitute only, because despite the fact he keeps saying he's just riding for fun, he's been great to watch - and playing a lovely role as team-mate yesterday.  Maybe it's "because" what he's saying, not "despite", but still, it seems crazy to me....

On the women's side, Katie Compton has won everything she's raced in the World Cup series, but I'm not sure snowy races suit her POWER!  Daphny van den Brand has been sick, so I'm not sure if she's starting.  Both the Czech riders, Katerina Nash and Pavla Havlikova, are strong in the snow - as was little Sanne Cant - and Hanka Kupfernagel found her form yesterday, winning Antwerpen in similar conditions (when she's on-form, she's a fearsome opponent, with every tactical trick in the book up her sleeve).  Marianne Vos returned from track training in Melbourne at the start of the week to come second in the snow yesterday, and despite the fact that was her first race of the season, and the fact that just like yesterday, she'll be starting right at the very bad of the grid, you can never discount her!

And for the women, standings after 3 rounds (they don't ride Igorre, for some reason)

If that was too complicated for you, here's last year's final lap - it shouldn't be as snowy as this, but the snow and ice will definitely play a big part.  By the time the men start, the juniors, u23s and women will have pounded round the course, so it could also be slushy and muddy as well as icy....

There'll be streams from ProCycling, BVLS (scroll down) & CyclingFans - as always, if you're having problems, I'm sure someone here will help you out.  And if you want reminders of which rider is which, my top tip is keep the startlist open in one tab and gs' "Who's who in the Euro CX peloton" open in another!