So you're running a 'Cross race in the week between Christmas and New Year.... You've missed the opportunity to have it on a major holiday, when most people are feeling the after-effects of SOME kind of over-indulgence (too much food, booze, family...), so how do you make your race stand out?  You hold it after dark, under floodlights!  And late enough for most of our American friends to be able to watch it LIVE!  And show it on a free-to-view proper website, courtesy of the fabulous VT4 tv station, so there's no scrabbling for streams that work.  It's Diegem, the 6th race in the SuperPrestige series, and we love it! The gs-calendar description of Diegem?

Now this one is easy to recognise: Diegem is the race raced in the dark, under artificial floodlights. There is one big-ass sandpit turned into mud turned into gravel road and some hills. The race is partly in the field and partly in the forest; but the biggest challenge is the lack of natural light.

And that was written long before Belgium was covered with a blanket of snow!

More info below, but here's the Vt4 advert for the race!

Remember, you can watch all the action live on http://superprestige.vt4.be/ and chat through the race here!  Prizes for anyone who spots our very own Albertina in the crowds!

So, what first?  Well, the parcours are here: 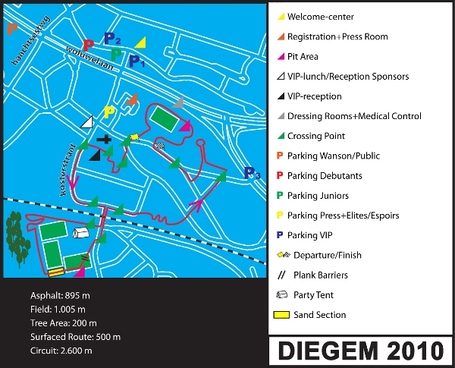 So planks, sand (frozen sand), some short climbs to run up, some steep little descents and a little bit of forest... Possibly a mini flight of steps, from the advert?   But really, the biggest obstacle the riders will be facing is sneeuw, and lots of it.  Running on ice, carrying a bike, or on ground that's been rutted by the previous races on the course, and then frozen solid?  Under floodlights?  I LOVE this sport!

Nys looks pretty comfortable up at the top there, and he DOES like snowy races.  Looking down the startlist, so does World Champion Zdenek Stybar - but we've no clue what his form will be like, after his recurrent knee problems.  Usually at this point I'd be talking about Radomir Simunek, but poor Radomir broke his collarbone in the Zolder World Cup race which twins with this one, so he will be out for the rest of the season...  Niels Albert was superb in Zolder, but generally when he's done well one day in the weekend, isn't so strong the next day (I am prepared to be proved wrong).  Lars Boom won in Zolder (after his many chaingates...) but isn't on the startlist for Diegem (I think, but am not sure, the riders for the SP series are fixed at the start of the season).  Pauwels and Meeusen did well in the snow too, but were invisible at Zolder...  but really, in these icy races, skill is important, but luck - and mechanicals - play a big part.  Last year Nys should have done much better, but lost his podium spot due to mechanical issues and ended up running over the line with his bike over his shoulder...  and it wasn't anywhere near as bad weather last year....

I'd tell you more about the past winners, but it's only been a floodlit race since '07 - Nys won it then, Styby in '08 and Albert last year.  2007 was "only" Nys' 4th win here - and de Kneght and Wellens have also won here, in the daylight, so it's a fairly open course...  But Sven was holding himself back at Zolder for this one, because he really, really wants to win his 10th SuperPrestige title.  He'd had 5 consecutive wins until Styby won the series in 2009...  so with 2 more rounds after Diegem to go, will he go all out crazy to win this race, or will we see the cagey, tactical Nys, who doesn't mind where he comes, as long as it's in front of Pauwels and Stybar?

And STOP PRESS!  Nys may not even ride!  Apparently he rode Zolder with massive back-pain, and will be at an osteopath first thing on Monday - yikes!  Hope he's ok (thanks Marques for the link) - so really, anything could happen...

What more information do you need?  There's the who's who from gs, which reminds you how to tell the difference between riders, there's more info on the official website....  including videos of Nys' problems last year, and post-race interview, interviews with the other main players, and this great highlights video

See you later for the race!