Share All sharing options for: Two More Years for Arndt at HTC-Highroad 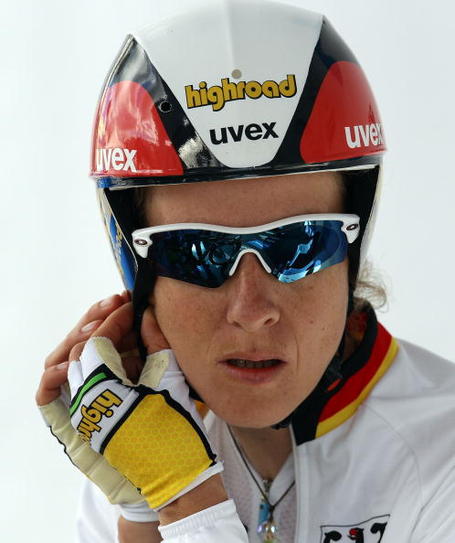 It's press release Tuesday! HTC-Highroad has announced today that Judith Arndt will finish her career with the team. The German will race two more years with HTC-Highroad.

We last saw Arndt off the front with Nicole Cooke in the finale of the women's road race in Geelong, and she finished second in the time trial behind Emma Pooley. Arndt has finished on the podium in the Worlds time trial five times since 1997. She is also the current German national time trial champion. Injury and illness have marred the past two seasons for Arndt, but in 2010, she did win the overall at the Giro della Toscana Internationale Feminile and finished second at the Giro Donne. A past World Champion in both the time trial and the road race, she has won many of the biggest races on the women's calendar.

Press release quote! Arndt said of her plans for the coming season: "Last season wasn't really bad. I got a lot of good podium places and proved I'm still a World Class rider, but it wasn't very satisfying, either because I didn't win a lot. So I've got a point to prove in 2011. And, London will be a big objective in 2012, my last year as a professional."