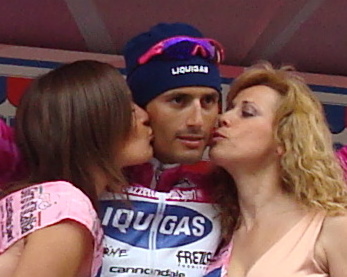 Discrete elaboration, on the flip!

Wait, you thought this story was about what?!? No, I am simply pointing out that Daniele Bennati, late of Liquigas and now the token sprinter guy on Team LeopardSchleck, has announced that he plans to ride all three grand tours in 2011. Why is this news?

First, it suggests a slight change of direction in his career. You and I know that his days as an elite grand tour stage winner are pretty much over. Not sure that he does, but the cold, hard reality is that he hasn't won a single grand tour stage since 2008, hasn't won a Tour stage since 2007, and the bunch gallops are now controlled by the Cavendish-Farrar-Greipel oligarchy. I'll do some statistical analysis on this soon, I promise.

But not being the top galloper in the bunch doesn't mean he can't win some big victories for the Leopards. He did take home the maglia ciclamina in his last and only serious Giro run, and this year's Giro should be more or less abandoned by sprinters from day 1. Sure, the points will likely go to a climber, but he's in with a chance.

Another reason it makes sense is that if Benna can't just outsprint everyone, he can still be the new late-career Erik Zabel -- riding everywhere, waiting for his chances, scoring points, earning some extra cash, showing the spots. There's something to that. Oh, and while he frequently rides the Tour and the Vuelta, he belongs at the Giro. Oddly enough, the Italian rider who has spent his entire career riding for Italian teams has only ridden the Giro d'Italia twice in his nine years as an elite pro. The problem has been a robust classics agenda (viva il Fiandre!) which doesn't set up well for a Giro run, then a Tour run. So he's cutting back to just Gent-Wevelgem to balance things out this year.

And finally, seeing him HTFU for his new team suggests that these role-labels are, as usual, a bit overblown. Ultimately cycling is about teams trying to make noise at races, one day at a time, and everyone has a job to do. Benna may be best known for some sprint wins, or the time he took off his shirt after a stage of the ATOC, but my fondest memory of him so far was the killer leadout he did for then-teammate Alessandro Ballan in the 2007 Tour of Flanders. Benna got on the front of the main field as the peloton entered Geraardsbergen and drove it hard to the foot of the Muur, where Ballan launched the attack that made the race. Considering he's joining guys like O'Grady, Cancellara and Jens!, the LeopardSchlecks* have the look of a deep, versatile, hard-working squad for the Tour.

[*Until they come up with a real name, it's either this or the No Bjarnes Club. I'm fine with either.]