From the Echo Chamber: Bronzini Chats with Italian TV

Share All sharing options for: From the Echo Chamber: Bronzini Chats with Italian TV 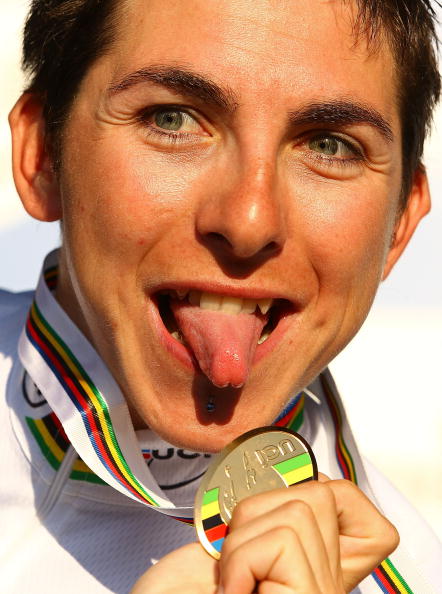 There's a brief interview with Giorgia Bronzini making the rounds today. It comes from Italian television, and celebrates her world championship win in Geelong. What does she remember the most about the Worlds win? "Certainly, the emotion when I crossed the line. That shout was a little about freedom, and to let my team know right away that we had won. That Italy had won," recounted Bronzini to Giacomo Crosa. Cycling is sometimes seen as an individual sport, "but the team is important," Bronzini says.

The new world champion isn't much of a parts geek. "I am the type who gets on the bike, pedals, goes to train or to race, and then, enough!" she explained. She saves her passion for wine, and likes nothing better than to get a group of friends together and drink good wine. Forget the team presentations, I want an invite to Bronzini's next wine party! Bronzini also told the story of how she got her piercing. It happened in Hollywood. Why? She promised she'd get a piercing if she won a medal at the track World Cup in Carson. She won! "Do you regret it?" asked Crosa. No regrets, said Bronzini. "It is a little like an amulet, or a good luck charm."

Tuttobiciweb has an Italian transcript of the interview. Or, you can listen to Bronzini, if you like. With music!

Yes, my friends, it is a rather slow week with the bike racing. The bike riders are shuttling about to warm places for training. The races have not yet begun. But soon enough, there will be stories and hijinx. Meanwhile, Chris is laboring over the massive transcript of our interview with Jonathan Vaughters. How glad am I that he volunteered to do the typing? Oh so glad! So very glad! Anyway, watch for some more entertaining fare from us next week. Among other things, I have 150 brand new crayons to abuse. Now, what shall I draw first?