Digging deep into the suitcase of courage - Igorre World Cup

Share All sharing options for: Digging deep into the suitcase of courage - Igorre World Cup

Out of Belgium for this, to normally sunny Spain. Why should you watch? Well, in true Spanish fashion they hand out funky pancake-like hats. Also in true Spanish fashion, the TV director will infuriate you by missing all the decisive moves. It's a typical field race (that's not an absolute given in cross), which is that much harder if it's muddy (which it usually is). Not too many special tricks - no houses in the middle of the road and all that. 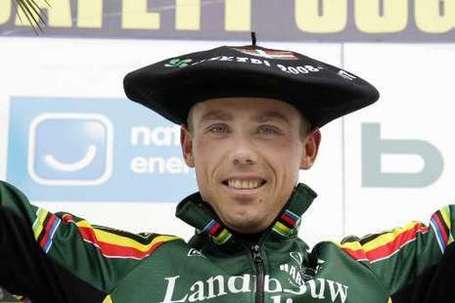 Good news, after all the Spanish strike shenanigans, all the major players have made it to Igorre. Niels Albert, Dieter Vanthourenhout, Klaas Vantornhout, Bart Wellens, Kevin Pauwels and Rob Peeters by car; Sven Nys, Sven Vanthourenhout, Gerben de Knegt, Bart Aernouts en Thijs van Amerongen by private jet. But they all made it. They're all there.

Except for Zdenek Stybar, of course. The current leader in the world cup and the GVA trophy is on doctor's orders enforced rest until Christmas, and will likely lose first place in the WC ranking today.

Word on the street is that it's raining in Igorre - it always is - so it'll be a mudfest of a race. Tune in at 15h25 CET - that's an hour later than normal! - for some cross fun. And do stick around afterwards for Sporza's 2010 year in cycling. It'll be grand!