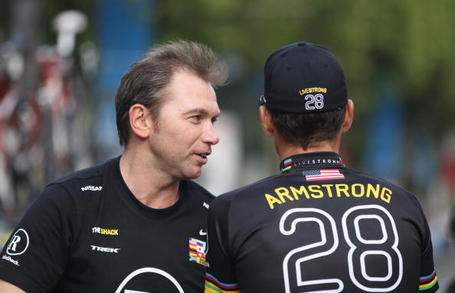 The Shack... they don't get much chatter around here, as American teams go. Obviously a lot of us have moved on from the Lance Armstrong story, which in its latest incarnation seemed more about targeting casual fans than most of us. Lance has said as much. Then there's the fact that his return has seemingly re-energized the anti-Lance forces (would there be a special prosecutor without the comeback?). Then there's the spectacle of Versus and the mainstream media selling his story (justifably) to the masses, to the exclusion of so many others (boo!). And anyway, wasn't the entire Radio Shack story just the No Contadors Club, a team united around the principle that they didn't want to be teammates with the current Tour champ?

This is the headline, but to stay on this theme is to discredit, unfairly, a cycling team, made up of a couple dozen or so guys who ride their bikes every day, who train hard and perform at the elite level around the world.

I never wrote a formal preview of The Shack last offseason. Had I done so, I would likely have projected them to make some noise at the ATOC, the Tour and few other places. Ultimately, they ran a professional outfit with a full roster of guys as well as the Trek-Livestrong project for developing some kids. But the plan did revolve to a large degree around those two events.

Every now and then in sports you get a story of overcoming that captures the imagination. This year's story revolved around a 38-year-old American cyclist out to prove to his detractors that age is only a limitation in one's mind, if you let it. This evergreen pro, with the help of some long-time teammates and his trusted Belgian DS, stormed the Tour de France and other famous climbs of Europe and elsewhere. Fans along the side of the road in California, the Pyrenees, Alpe d'Huez and the Basque Country won't soon forget the name of America's greatest stage racer...

I've never fully given the guy his due, mostly out of distraction and -- it must be admitted -- a mix of ageism and ignorance of how guys like Horner (and Levi for that matter) operate. The sound-bite analysis says that if you're working for Lance, you're not working for any other goal, so move along, nothing to see here. But Horner, like Levi, has carved out his own space over the years -- in Chris's case as a classics threat and a guy who's usually got one solid grand tour in him each season, usually in France. He isn't much of a threat to win as long as there's a major time trial involved, but he's a master at hanging around the climbs, occasionally pocketing a stage, never really disappearing.

What Horner accomplished this year maybe shouldn't be as astounding as it looks, but still:

Horner has never experienced these kind of results before. He's been 15th in the Tour and 20th in the Vuelta. He has a couple top tens at Lombardia and a podium at Emilia. Enough, perhaps, to suggest that these kinds of results have always been in his legs, just waiting for their moment to shine. Horner has spoken very bluntly about working for Lance Armstrong and seeming happy to do his teamwork, but like a lot of guys at the top level about whom you don't hear very much... there is a lot they can do. The trick is to stay focused and be ready when the moment comes, possibly without much warning.

A couple other stories from the positive side of the ledger: Tiago Machado showed that his future is pretty bright, with a sixth in Romandie and third in Criterium International. All of 25, Machado has a nice balance of time trialling and climbing ability, so it will be rather interesting to see what he can do in his first grand tour, almost certainly this coming season. Jani Brajkovic also put up his best season, winning a major stage race (the Dauphine) for the first time since the 2007 Tour de Georgia. Fifth in Romandie and 9th in California, Brajkovic is shaping up as a major threat in the one-week stage races, if not the grand tours.

The rest of the story was a bit more predictable, and less energizing. Getting the band back together meant one more year of JB, Lance, Levi, Klodi and co. seemingly focusing an unhealthy amount of energy on the Tour de France. This was understandable back when Lance 2.0 was locking up the yellow jersey year after year, and Armstrong's third place in 2009 was enough to tempt everyone into another replay of the same old song. While I am not interested in apologizing for Armstrong's flaws, known or alleged, I have always felt like his Tour focus was... understandable. Between the sponsors' interests, the money at stake, and Lance's uber-competitive, fastidious nature, it is hard to see him risking much in the pursuit of another yellow jersey. Behind this overly focused facade is someone who actually does appreciate the sport of cycling's broader history, or at least someone who understands that his legacy could use a little more rounding out. This hunch was somewhat vindicated with his Tour of Flanders run, which was fun to see and impressive that he mostly hung with the first chase group. Seen any other Tour winners in Flanders lately?

Anyway, so they pretty much played themselves into another season of "Tour de Lance," and finally, inevitably, it stopped working. Undone by something as mundane as clipping a pedal on a roundabout, once the ever-careful Armstrong let down his guard fatefully, he was done, and Lance 3.0 disappeared overnight. In his place was a guy out stage-hunting, smelling the roses, and making a beeline for the sunset. [Hastily, if he's to outrun the posse on his tail.] Bottom line: the Lance-Bruyneel Blueprint finally expired.

The last of the team's big stars, Leipheimer, took a step backward in 2010. No victories for the first season since his Rabobank years (remember those?). Placing 13th at the Tour was pretty forgettable for a guy with four top tens and a podium. His grip on the Tour of California loosened with the switch to May, and Levi found himself looking up at the other two big American stage-racing teams, HTC (winner Mick Rogers) and Garmin (Dave Z). We know for sure that the ATOC was a big target for him, but so too is the Tour, so whether Leipheimer's slippage was a matter of the program change or turning 36, we should know by July sometime.

This was Year One of a new team, which as we've seen elsewhere is always a struggle. Riders don't know each other too well yet; DSs are challenged to figure out who can do what and where to slot that person in, etc. So if their win total seems low, it may be due to the confusion inherent in starting a bike team. But that may be an overstatement in the case of this roster. Anyway, not much is changing for 2011, except of course for the departure of their captain, the guy who supposedly kept the team on the right path with the incentivizing buzz from his entourage as well as Lance's willingness to push his teammates. So look for a watered down version of last year's squad.

Despite Horner's great run last year, one would have to presume Bruyneel will build his Tour de France squad around Leipheimer, Horner, Kloden and Machado, with Levi first among equals. For the first time since 2007 Leipheimer isn't slotted into a secondary role, and that year although Contador overtook him in France, Levi put in an unforgettable performance, threatening both first and second places as the final ITT (which he won) unfolded before finishing third. Can he muster another such effort four years later? I can't say I like those odds, but it would be nice to see him go all in for the Tour one more time. It would also be cool to see the Shack work for Horner at the ATOC. His Oregon charm connects well with fans (i.e. good publicity move) and if he can win the Pais Vasco, then Cali shouldn't be out of reach by any means.

Beyond this, the future for the Shack is tricky to predict, and maybe just grim. Bruyneel has invested a large chunk of himself in rider development, and the Trek-Livestrong project will likely live on for a while, with Lance's $upport as well. New faces coming in include new US champ Ben King; Nelson Oliveira, who has a nice mix of stage race results and crono ability (4th in Worlds U23 ITT); and Michal Kwiatkowski, a Polish kid whose skills... I'm having trouble pinning down. But he's got his share of wins to his name, mostly in Eastern Europe. They already had guys like Bjorn Selander, Sam Bewley and Ben Hermans on the senior roster. So building for the future is happening.

But what exactly is the future? Bruyneel needs another sponsor beyond 2011, and already lost Taylor Phinney due to the uncertainty there. Also, it's hard to dismiss the potential impacts of a full-blown Armstrong scandal and what that would do to the team. Sponsors buy reputations and images, and Bruyneel's can't afford a hit like that. The Radio Shack project is on a tightrope for 2011, and it wouldn't surprise me if this took a toll on the team before the year is out.