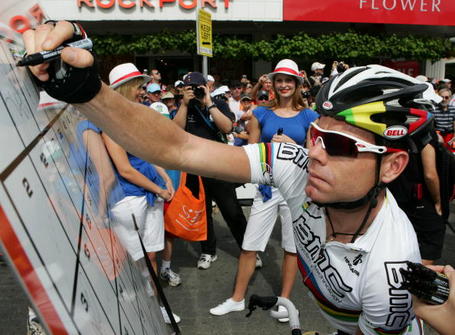 Their open challenge to the Quick Step throne. BMC have a long-term plan, apparently, to join the big show, and DS John Lelangue has chosen the classics as a way to ratchet up the progress. In something of a coup, he nabbed the signatures of the four best Flanders-Roubaix contenders in need of a change of scenery: George Hincapie, Alessandro Ballan, Karsten Kroon and Marcus Burghardt. Ballan -- a metronome of consistency at both Flanders and Roubaix -- is the centerpiece, with Burghardt (7th last year) his sidekick for de Ronde. Hincapie's emphasis tilts slightly in the direction of Paris-Roubaix, while Kroon is the glue that holds the gang together, good on the cobbles and the climbs, ready to work or attack, particularly in the bigger dress rehearsals. The point is, in past years Quick Step have had arguably the strongest guy during Holy Week -- Tom Boonen -- which forces teams into a defensive posture. Except Quick Step have the numbers too: Devolder, Chavanel, and so on. So you pick your poison, either by sticking to Boonen and watching Devolder disappear (RvV '08, '09) or by trying to control the race more generally and contending with Boonen in the finale (P-R '08, '09). Double ouch. I am not predicting that BMC will break the QS stranglehold, but by sending out not just one guy who can win but three or four, they have a chance.

The Classics lineup, of course. See above. Oh, and that guy in the rainbow jersey. Cadel Evans might have his share of detractors when the subject of the maillot jaune comes up, but the more I think about it, the more it appears to be another perfect coup for Jim Ochowicz, Andy Rihs and the BMC brass. Without a major GC contender, BMC were left talking about maybe going to the Tour in 2011. Evans instantly moves that plan up a year... maybe. And if not, Evans picks another grand tour (he insists he's going to the Giro to win) and is installed as the favorite almost instantly. For a team that's plotting a steady rise to the top, Evans gives them a major credibility boost. He is also one of the safest bets in cycling to score oodles of points -- top four in the world the last three years, regular challenger in not just the Tour but places like the Dauphine, the Ardennes Classics, and the fall Italian season. He'll be defending his world title in Australia... no shortage of attention there. Whether this was a great move for Evans is a separate matter (answer: we'll see), but from BMC's perspective the transfer season came up all roses.

Mauro Santambrogio. Another escapee from the Lampre disaster, Santambrogio was last seen lighting up the front of the Giro di Lombardia in the late stages, presumably trying to soften things up for his former boss Damiano Cunego. The 25-year-old climber made his biggest marks back home in Italy, capped by a win in Tre Valle Varesine and second in the Coppa Agostini. These August performances convinced national team manager Franco Ballerini to make him an alternate for Mendrisio, a high honor for sure. He and Evans might bond pretty nicely in the hillier classics. Twenty-three-year-old Mathias Frank is the other rising young talent, more of an all-rounder with some time trial results in his resume.

Apart from April, the Italian fall season. Lombardia is a great race for Evans and Santambrogio... and Ballan to a slightly lesser degree. I had an all-too-brief talk with the former World Champion this weekend as he was departing the BMC camp, and he singled out his climbing as a key asset in the spring. IMHO Ballan and Pozzato do a nice job of blurring the lines between the cobbled classics and the hillier one-day races [and if you like this subject, google "philippe gilbert"], which aren't out of reach of the climbier Flanders guys if they can hang on for an extra km or two. BMC could probably put together an excellent Giro d'Italia team, though in all likelihood Ballan and Hincapie will shut down in late April and Evans will have to take his turn around the boot with some younger lieutenants while they sweat out their Tour de France fate.

The Tour de France... if they get in. You can count on a handful of things at the Tour: Evans will be in the top ten; Hincapie will finish the race and turn himself inside out for Evans on occasion; and the other classics guys will be visible in some long breakaways. But I don't see a roster of support guys who can help Evans dictate anything at the front of the Tour peloton, and the competition for podium spots is likely to be stiffer than ever. I guess it depends on what you consider success. For a first-time entrant, BMC might be pretty pleased. Problem is, Evans will always be cast against the highest expectations, thanks to those two achingly-close second placings.

So, how about 2011? And 2012? No doubt the brass would be happy to table that question, but it's interesting to see BMC trying to make their mark with a sudden influx of big-name, veteran riders. A more conventional maneuver would be to grow slowly with talented young guys whose career progressions mirror that of the team, maybe sprinking in some veterans to show them the ropes. But little BMC got an instant makeover this offseason, largely through guys like Hincapie, Evans and Kroon who are beyond what's usually thought of as their prime. So did they buy a new identity? Or is the plan to evolve slowly with the kids... but have some fun while they're waiting?

Alessandro Ballan is hardly a forgotten figure in cycling, even if his turn in rainbow didn't go as planned. The Treviso native missed his chance to wear the famous stripes on his beloved Flemish paths last spring, but he finished up strongly enough to dispel doubts that the cytomegalovirus that ruined his spring campaign would be a continuing concern. Assuming all goes well this spring, Ballan has a chance to make serious amends. He no longer shoulders the pressure of being world champ, nor does he have to go it alone as he did at times for Lampre. By any conventional standard, he is in the prime of his career, racing for a team that can support him as well as let him call his shots. Not all of them, perhaps -- the only downside to having four dangerous options for the classics is that one of your teammates might need you to lay back while they win. But my impression of the State of the Cobbled Peloton starts at the front with the image of Ballan, Boonen and Cancellara matching each other pedalstroke for pedalstroke into the Roubaix velodrome two springs ago. Hopefully these three giants will get to renew acquaintances this April, along with some new faces, in what's building up to an incredible spring campaign.

For more on last week's BMC camp, Podium Insight has words and pics.