2010 Team Previews: Spring in Their Step?

Share All sharing options for: 2010 Team Previews: Spring in Their Step? 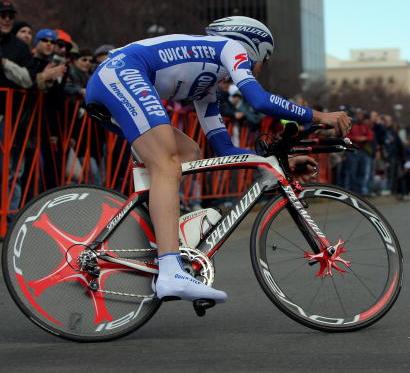 The lack of anything interesting. Sandbagging is an art form in cycling, perhaps even something of a lost art considering how underutilized it is in the world of team sports. Short-term sandbagging is so pervasive that it happens in my club races, or on VDS threads. But there's an art form within the art form: the long-range sandbag. And that's what crafty ol' Patrick Lefevre is pulling from his bag of tricks for 2010. Quick Step aren't merely talking down their chances on a given day; they're talking down their entire structure. "Tom Boonen will take a shot at time trialing." "We are saving five roster spots for Alberto Contador and his entourage so we can be a grand tour team." Stuff like this.

Frankly, they have to try something. No team is more monotonous than Quick Step. Every year they set out to conquer March and part of April, downshifting after the cobble is lifted in the Roubaix velodrome into a second-rate bunch of stage hunters for the remainder of the year. When they make dramatic changes -- hiring Sylvain Chavanel or Gert Steegmans, say -- they merely reinforce the narrative. Even their kit, the navy suit/white shirt/red tie of cycling, barely changes. It's almost impossible to believe a team could be so narrowly focused, so when they start tossing out alternative storylines, it's very, very tempting to bite. I mean, nobody in their right mind would spend all that money on a team that is geared to race in earnest for five weeks. What are they really up to?

Ahem... hey, I gave it a shot. My purpose in writing these previews is to try to frame a team in an interesting narrative that you haven't already read a dozen times. So far the only truly interesting thing about Quick Step's approach to the coming season is their attempt to make black shorts fashionable again. Which for this team constitutes a radical change.

Who Makes Them Tick: DS Little Bear could answer this one. I'm not saying Stijn Devolder hasn't earned his success -- you don't make it to the finale of De Ronde by accident, let alone win it -- but if he doesn't wake up every day thanking Tom Boonen for being his teammate, he's remiss. From the Omloop to Roubaix, every ounce of Quick Step success starts with Boonen, even if it doesn't end there. If Chavanel or Devolder get away for a win, chances are it's because everyone was watching Tornado Tom. Remember Pippo Pozzato sneaking away to win MSR? If Wouter Weylandt wins a sprint, same thing. All eyes are on the Man from Mol, as they should be. With that much power and sprint speed, he's the most dangerous guy in any serious cobbled race. If Lefevre chooses to use him as the ultimate decoy and punish teams for negative tactics, that's their problem.

Davide Malacarne? With this team, who knows. They are so heavily invested in their veteran stars that it's hard to imagine them sneaking up on anyone, even their fans. But Malacarne is not only a talented 22-year-old, coming off some nice finishes last summer and fall (13th in GP Ouest France, 4th in the Coppa Sabatini, 19th at Emilia), but also serves as a climby classics guy for a team not otherwise too heavily invested in these races. Malacarne may feel thrown to the wolves when he has to front their half-baked Giro team -- unless Quick Step send the better-known Kevin Seeldraeyers to Italy for a run at the maglia rosa. Regardless, Malacarne will likely be given plenty of freedom to chase glory from August 1 onward. Nothing says "low expectations" like flashing the Quick Step business suit at Lombardia. That's a lot of freedom and opportunity for a kid.

Apart from the usual spring classics clampdown (a taller order in 2010), I will say the maillot vert. After two unhappy summers, Boonen seems determined to put his little off-bike mistakes behind him. This is where the sandbagging about him "not really being a sprinter anymore" plays into his hands. Not a sprinter? He just scored his customary wins in Qatar this week. More significantly, the Tour de France passes over his home turf (where he vows to be in yellow), and the last time Le Tour had a Belgian detour, Boonen passed through in Yellow and eventually came home in Green. 2007 was also the last time he was free to contest the points comp (last year's absurd last-second inclusion doesn't count). Well, anything Thor Hushovd can do, Boonen can do better [except the heroic climbing escape, I would never try to detract from that]. Anyway, the points comp should be utterly fascinating this year, featuring a new generation of great young sprinters getting shown the ropes (or not) by some great veteran sprinters, content to lose the battles if they can win the war.

The Spring Classics. OK, they won't make a dent in the GC at the Tour, and apart from maybe one run by Seeldraeyers they will completely disappear from another grand tour. And if Malacarne or Branislau Samoilau have some hilly classic wins in their legs, it probably won't be this year. But that's like criticising Shakespeare for having a lousy singing voice. Whatever. Quick Step have pinned all their hopes on another dominant spring campaign, and my humble sense is that their past success and Belgian pedigree have trapped them in a bad situation. If they win again, there will be a few weeks of happiness, but even this gets stale. [The Belgian media gave every conceivable sporting honor last year to Philippe Gilbert, as if they too were desperate to celebrate someone else for a change.] Worse, not only is there noplace to go but down; Quick Step now have to contend with the deepest competition and most concerted challenge to their throne in years this spring. If they hang on to their crown, it'll be by their fingernails, and/or the grace of Boonen. As other classics outfits stack up three- and four-deep, that decoy tactic won't work anymore.

If Contador does come walking through that door next winter, who walks out? The Accountant was promised four or five roster spots for himself and companions -- a first-class grand tour outfit, or at least that was the thinking. Well, for years Lefevre has run a first class spring classics outfit, in part because he didn't have to (or couldn't) simultaneously staff up for a yellow jersey campaign. Retaining Boonen seems like a no-brainer, once you contemplate the fallout of not doing so. But Chavanel and Devolder are two valuable properties Lefevre might be forced to sell off or renounce in order to finance a Contador cabal. Which in turn would force Quick Step to start retaining young (low-cost) Belgian talent to work with Boonen, instead of forever letting them run off to Bruyneel or Lotto or Columbia for their pre-Quick Step apprenticeship. It'd be fun to watch, which is more than we can say about the current incarnation.

How much laminated flooring can one company market during the Tour of Flanders? Quick Step got into the cycling game eleven years ago as the latest in a rotating succession of secondary sponsors to the Mapei juggernaut. Timing is everything, so when Mapei finally got out of the game four years later, Quick Step quickly filled the void and seized the mantle of the Spring Classics outfit. By the time Boonen soloed home to victory in de Ronde sporting his rainbow jersey, Quick Step had presumably gained a market share in Belgium verging on 100%.

Sometimes sponsors enter Cycling for a quick, low-cost boost in name recognition, getting out before the price goes up. Not so for Quick Step. My hunch is that they intend to build something far more durable by sticking with the same plan for such a long time. I am getting waaaaay beyond my area of expertise and virtually begging for a smackdown here from one of you, but a look at the Quick Step website shows a broad reach: Italy, Spain, France, the UK, Netherlands (where sales might lag a bit each spring), Germany, Scandinavia, the US, and of course the Российская Федерация. If you're a fan of cycling, you probably can get Quick Step flooring at your nearest home builders supply joint. Me, I would buy Quick Step over a comparable product in a heartbeat. Their image isn't just the team, it's the Classics themselves. Venerable, glorious races contested at the highest levels of sport. Sounds like smart branding to me.