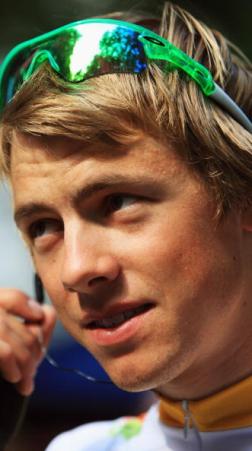 Yes, we have beaten this story to death already here at the Cafe. Before it's all said and done Eddy may well be a lot of things. But what's mildly interesting at the moment is seeing Eddy-as-sprinter. In our last checkin reader Forstoppelse offered this:

Just talking about sprints, he mainly has one approach – go for it at 400 meters. Until now this has given him many victories over riders like Kuschinskiy, Viganó, Hunter and Ballan – but, has resulted in nothing a number of times as the toppier sprinters have been right in his backwheel.

Today he outkicked the likes of Tom Boonen and Tyler Farrar for a sprint win. I am not seeing any Youtube video yet; surely "teamskyfan" will get around to that before long. The best, recent image of Boasson Hagen in action is probably this video, from the Tour of Qatar stage 5. You have to rewind it a bit to pick out who's who, thanks to a moto that blocked the front view of the final sprint, but it appears that Boasson Hagen got himself onto Boonen's wheel and nearly -- but not quite -- came around for the win. Check it out:

Clearly Boasson Hagen isn't just having a go at 400 meters out. A year later, with a different team, we can see him behaving like a normal sprinter: looking for the fastest wheel and trying to come past it. At the shockingly young age of 22, it's reasonable to allow the guy to take some time in developing a comfort level with bunch sprinting at this level. He showed some acumen for bunch sprints at the highest amateur levels, with wins over guys like Mattia Gavazzi and Oscar Gatto in his amateur days. Once he joined Columbia, he found himself in with the big boys, losing out to the likes of Alessandro Petacchi (hey, join the club), Tom Boonen, Gerald Ciolek and his new teammate Andre Greipel.

This last part -- how many starts did Boasson Hagen make with Columbia when Greipel and Cavendish were both absent or out of the finale? Not many, and the physical impossibility of any team investing heavily in three top sprinters probably meant that those leftover chances didn't really give him the opportunity to mentally and physically attune himself to the discipline. It's enough of a balancing act for HTC to continue to promote Cav and Greip properly that, without knowing more, I can't imagine them being able to focus on Eddy's sprint desires. Classics? Sure, move him up and give him some support. But not the sprints. So when he found himself in a sprint, it's not surprising that Boasson Hagen's approach lacked sophistication.

If this isn't a specific reason for Boasson Hagen's surprise move to Team Sky last fall (summer, really), then at least it's a pretty good example. I will be interested to see this with my own eyes, but VeloNews claims he "got a perfect leadout from his teammates" today, something not possible to expect a year ago. Much more has been made of Boasson Hagen wanting Norwegian teammates to make him feel more at home (he's supposedly extremely shy), but in the long run his move to Sky may be simply a matter of needing a blank canvas on which to start inscribing his legend. If the guy really is a prodigy in sprints, flat classics, hilly classics, time trialing, and sub-h.c. stage races, then he needs room to grow in all possible directions. He needs a team that doesn't really feature other riders of similar stature except in the grand tours, where Eddy isn't a factor (for now). HTC have way too much talent to support one guy this way, and sprints in particular are a closed subject. But Sky can nominate him as their sprinter, devote time and energy and teammates to setting him up. The directors like Brailsford also have a track pedigree, so while I'm straying well beyond personal knowledge I'll have a guess that they know how to coach sprinting.

At 22, Eddy-as-sprinter is a pretty good occupation. He's growing still, putting miles on his legs, and some longer, harder objectives might be best saved for a year or three. For now, Boasson Hagen can hone his finishing skills, satisfy his rather obvious appetite for victory, and promote his new team effectively, all while developing his talents in a deliberate, sensible way. It's still February, but today is an indication that Boasson Hagen is ready now to compete at the highest level in this one discipline.

Dunno about you, but I may actually be hoping for a bunch finish at Milano-Sanremo.