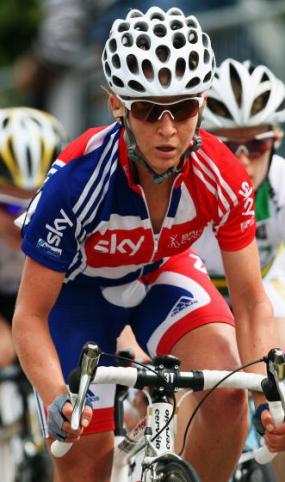 Last season Cervelo were the dominant team, and most impressively it really was a team performance. OK Marianne Vos may have won the World Cup series, but everywhere else you looked there was another Cervelo rider on the top step of the podium, from Claudia Hausler’s Grand Tour double to Emma Pooley’s Grande Boucle and assorted long range attacks to Kirsten Wild possible beating Teutenberg to the title of sprinter of the year to Kristin Armstrong’s wins in Gila and Ardeche and selfless support of her younger teammates. So where do you go from here?

Actually, the most interesting changes at Cervelo this winter have been behind the scenes. Thomas Campana, who managed the team back in its old Lifeforce days has left along with chief DS Manel Lacambra, to be replaced respectively by Dutchmen Joop Alberda (ex coach of the Dutch man’s volleyball team) and Egon van Kessel (a long-time coach for the Dutch national cycling squad), which looks very much like Cervelo moving definitively from sponsor to team owner. In the light of what else has been happening with women’s teams this winter that looks like a sign that Cervelo at least plan to sponsor a team for the long term. Lacambra meanwhile has taken a development role alongside the newly retired Kristin Armstrong at US Cycling. If the girls there don’t yet know the Spanish for "suffer, you sow" then they soon will. All indications so far this year suggest that 2010 is going to be a lot like 2009. The team had set up Kirsten Wild for the sprint on stage 1, but unfortunately she suffered a puncture just 500 metres from the finish and barely scraped into the top twenty. In a three day race that would usually be the end of things, but far from being discouraged, the team dug in, set up their train so that Wild won all but one of the intermediate sprints and then victory in the final stage gave her the overall title too.

Get to know the riders... on the flip.

When doing earlier team profiles I have tried to just pick out a few names, either because they were likely to be the ones getting the results, or because they write about it afterwards. Surprisingly, Cervelo don’t have any notable bloggers/Twitterers on their team, although the team website is always a good last resort if you really can’t find anything else on a particular race (hint – we’d like a bit more candour/hot gossip/dolphin photos please this year), but they do have a lot of riders who should get lots of podiums, so here’s a rundown for you.

Kirsten Wild. If you thought that the story of last year’s World Cup was the battle between Vos and Johansson then you might have missed the fact that Kirsten sneaked into second place courtesy of a win in the Rund um die Nürnberger Altstadt and second place in the Swedish Open. That officially makes her the best sprinter in the world. Actually CQ reckoned that she was second in the world back in 2008 too, but some of the wins they scored were in fairly minor races, whereas in 2009 she just seemed to grow in confidence and speed and was regularly beating Teutenberg.

Sarah Duester. Expect to see her a lot in the final kilometer as Sarah is setling nicely into the position of final leadout. Don’t expect any of the Thor/Barbie rivalry here as both her proper victories last year came when she escaped before the sprint arrived.

Claudia Hausler. Officially one of Cervelo’s three team captains this year, alongside Kirsten Wild and Emma Pooley. Unofficially will probably be plan A in the major stage races because she has can sprint. She probably has one of the lightest schedules around, at least she did in 2009, but of the four or five stage races she will take part in she is likely to come out with two wins and two other podiums. Like Kirsten Wild, Claudia took a promising 2008 and delivered everywhere for Cervelo in 2009, including victories in the two most prestigious stage races, the Tour de l’Aude and the Giro Donne and second place in the Spanish Iurreta-Emakumeen Bira. Even Contador’s not managed to do the equivalent in a single season.

Emma Pooley. The third of Cervelo’s incredible signings from 2009. Like many cyclists from the English speaking countries Emma didn’t really learn to ride a bike properly until after someone realised that she could put out the numbers which suggested she might be pretty good. If cycling was just a matter of putting out the watts then she would be there with the best. If it was a matter of putting out those watts while going uphill then she probably would be the best. But throw in a few turns and some other riders and she suffers when riding alongside the Italians, Belgians and Dutch who spend their teens bouncing each other in and out of ditches and gutters. She’s picking it up more now, but the bloodstains that she so often finishes with on her elbows and knees suggest that the pros bounce very hard. Actually Emma was one of my favourite riders last year, as her ability to make long range attacks stick prevented other teams from just sitting for half the race waiting for a half-hearted break to come back by itself. Unless she has been working on her sprint this winter expect more of the same in 2010.

Carla Ryan. Very likely to spend 2010 alongside Sharon Laws as chief domestiques on the major stage races, but just note how pervasive the Australians are in women’s cycling.

Mirjam Melchers. Ok, they’re strong in the sprints, they’re strong in the mountains, surely there must be a weakness somewhere? Well one of this season’s new signings is the two time Flanders winner and owner of the most magnificent name in the peloton, Maria Wilhelmina Johanna Melchers-Van Poppel. Those two Flanders wins may have been back in 2005 and 2006, and she hasn’t been quite at the same level for the last couple of years, but let’s see what a sprinkling of that Cervelo fairy dust can do. In recent years Melchers has also been riding support in the stage races and putting in respectable performances. If she’s allowed to focus a bit more on herself, and Cervelo surely have the depth to let her do so, then she may well get another victory or two in the spring classics or the lumpier courses in the World Cup.

Lizzie Armitstead. For me Lizzie was one of the most puzzling riders of last year. Time and time again she and Lotto teammate Grace Verbeke raced each other down the finishing straight to a collection of 3rd and 5th places when a little agreement over who was going to lead out who might have given them both some more wins. Was that Lizzie being bolshie? Grace being bolshie? The DS being pathetic? I couldn’t say, but I’d be surprised to see that sort of racing on Cervelo, so the question is where does Lizzie fit in. She won the white jersey for best young rider at last year’s Giro, but not as convincingly as new teammate Claudia Hausler won it in 2008. She is a trackie and a sprinter, but not as fast as Kirsten Wild. My best guess is plan B in those races where Mirjam Melchers is plan A.

That’s not a bad front line attack, is it? The team website has downloadable detailed profiles (pdf) and those riders  I’ve not mentioned would probably get more consideration were they on another team (or to be totally honest if my German were any better). Could any other team say that they lost the World Time Trial champion over the winter and actually she probably won’t be missed.

Emma Pooley photo by Bryn Lennon, Getty Images Sport. OK, it's not in Cervelo Test Team colors, but surely that helmet gives her trade team away.