Share All sharing options for: 2010 Team Previews: Garmin In Transition 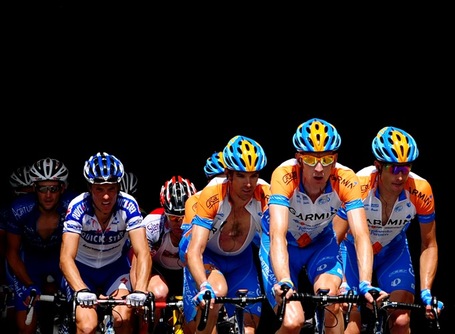 The sense of their having arrived. Or at least that was Team Garmin-Transitions' plan for the 2009-10 offseason, before Sky and Bradley Wiggins conspired to decapitate their grand tour squad. More on that in a moment... but apart from that spot of bother, everything pointed upward for Garmin: a new sponsor in tow (Transitions eyewear), a string of confidence-building victories, and an offseason filled with solid signings and juicy rumors. Assuming they can put aside the Wiggins business, Garmin-Transitions should complete their transformation from a noisy Continental squad to a mid-to-upper class Pro Tour team.

All this has happened in an incredibly short time frame, just two full seasons after announcing their ambition to join the European scene under the re-branded Slipstream/Clean Cycling movement flag. [Owner Jonathan Vaughters actually founded the team which evolved into Garmin-Transitions in 2003 under the TIAA-Cref label.] When Vaughters went public in winter of 2007 with his Tour de France aims, Slipstream-turned-Garmin were still a happy-go-lucky bunch of riders unburdened with high expectations and easily underestimated. Christian Vande Velde proceeded to surprise the world with a fourth at the 2008 Tour de France, a race they weren't even expecting to attend a few months earlier. Slipstream also laid down an important marker with a win in the opening Giro d'Italia team time trial, and Vande Velde won the Tour of Missouri to wrap up a nice little season. By 2009, there were expectations, along with Pro Tour status, and until July the team struggled to justify its place. But Bradley Wiggins secured the Tour's fourth spot for the team again, and the entire team went on a tear, racking up 29 wins (fourth in the world), 21 after the Tour arrived in Paris. Better yet, they succeeded in sprints (Tyler Farrar and Chris Sutton), time trials (Dave Zabriskie, David Millar, Wiggins, Tom Danielson) and stage races (Zabriskie and Wiggins); and their classics team has long held promise. Their points increased by 50% and the team was ranked tenth by season's end.

Success has its price, of course. As Garmin embarked on an offseason project to beef up in all areas, they cut ties with their humble beginnings. Out are Slipstream mainstays like Mike Friedman, Will Frischkorn, Lucas Euser, Blake Caldwell, Magnus Backstedt and Jason Donald. The 2008 nucleus of Millar, Zabriskie and Vande Velde now find themselves being surrounded by elite talent from Europe and Australia. This is no longer just a Clean Cycling project launching an insurgent campaign as a message to the Big Boys. Along with half a dozen other teams, they are the Big Boys. And they're expected to win like never before.

The Rest of the Story... on the flip.

Who Makes Them Tick

For once, this is a stumper. Farrar is their most prolific winner, but not the focal point outside of the sprints. My hunch is that vets Zabriskie, Vande Velde and Millar set the tone for the team, but Garmin's hopes for glory are more wrapped up in the kids: Maaskant, Dan Martin, and longer term prospects like Jack Bobridge, Tom Peterson, the Meyers, and maybe Ricardo Van der Velde. Oh, and don't be shocked if the highlight of the year involves newcomer Johan Van Summeren and some nasty pave. So who drives the team? Everyone and no one in particular.

Martin and Van Summeren. Most of what Vaughters accomplished in the offseason was to shore up their existing strengths, the exploits of known qualities like Farrar and Maaskant. Martin, on the other hand, might be overlooked. All of 23, he made steady progress last season and provided a few shocking results: second at Catalunya, 5th in Ouest-France, 8th at Lombardia. After missing the Tour with a sore knee, the young Irishman managed to start and finish his first grand tour at the Vuelta. This season may well be devoted to getting him ready (mentally and physically) to support Vande Velde in the Tour, but keep a close eye on him in hilly classics and shorter stage races. Van Summeren is a well-known and liked veteran masher, except that most people think of him as Cadel Evans' greatest domestique. But that fifth place in Paris-Roubaix was his second top-ten in the Hell of the North, and having traded Silence and H\o/ste for Garmin and Maaskant, he has to like his own chances (along with his team's) as part of a coordinated assault on the cobbles.

The Tour de France. I am going out on a limb here, since nobody will rate them #1 for any of the jerseys, but if all goes as planned they should have one of the more well-rounded, experienced, cohesive Tour units around: Millar, Martin, Zabriskie, etc. Vande Velde shouldn't mind this year's parcours, having some nice results in the Pyrenees in his breakthrough '08 Tour (as opposed to last year's injury-muddled but still respectable campaign). Farrar will have Robbie Hunter and Julian Dean (maybe) to lead him out in sprints. And all the talk will be about how Wiggins' departure was supposed to doom them in July. Truth be told, though, Wiggins' resume is thinner than Vande Velde's. Garmin might actually win more in the Vuelta (who knows?), but look for some moral victories in France.

As with a lot of teams, I am tempted to mention the Cobbles here, but the field is incredibly crowded this year. Best to temper expectations for now. Also, they've been very aggressive in chasing stage wins, which I am sure will continue, but that's impossible to predict... so here goes: David Millar will win stage 4 of Paris-Nice. Mark it down.

The Giro d'Italia. The last couple years they have made a showing of trying to win the Giro's opening TTT. This year, I wouldn't even want to hazard a guess as to who they'll send to Italy. Farrar went last year, but that had more to do with getting fit after sitting out the classics with a bad shoulder. Vande Velde is all-in for the Tour. In fact, most of the team will be. So May might be a pretty forgettable month for the Argyle Armada. Beyond that, it's hard to think of any big gaps in the calendar. Again, if there's a theme for this squad, it's that they make up for the lack of superstars by doing everything rather well.

So what's in Vaughters' heart of hearts for the long-term outlook of this team? The two areas where he's invested most recently are the cobbles and sprints... but the offseason was full of rumors that Vaughters was hot after Alberto Contador. And if he didn't make any major upgrades to the Tour squad, it's presumably because until the 11th hour he believed he had a one-two punch of Wiggins and Vande Velde, with broad support to boot.

I can only guess what Vaughters' real vision is, and even if he's stated it plainly in one of the zillion interviews he's given over the years, well, actions speak louder than words. My gut tells me that he's not trying to build a team for a particular function; rather, he is collecting riders he likes, good blokes with high ceilings like Farrar and Bobridge and Martin and Maaskant, and just seeing what happens when you get them racing together. HTC-Columbia, by contrast, have a master plan that you could spot from outer space. In some ways, it's a safer approach -- if you fail, at least people will recognize that you tried to do something. Vaughters won't get the benefit of the doubt if the team goes nowhere; hacks like me will complain that they never really knew what they were doing. And if they do succeed, we'll laud Vaughters for his keen instincts. The simplest truth about the sport of Cycling is that everyone's objective is to win, and unlike team sports there's little conventional wisdom as to how you should get there. There's no extra credit for winning with flair or points deducted for curious strategies. It's just a mass of humanity -- racers and their organizations alike -- all clawing their way to be first over the line.

Tyler Farrar has not looked much like a guy about to catch Mark Cavendish in 2010, but keep this in mind: by the end of 2009 he was arguably the second-fastest guy in the world (him or Greipel), and spent the offseason making a case for moving up. And this time last year he was trailing Hushovd, Boonen, Freire, JJ Haedo and co in ATOC sprints. It wasn't til Tirreno-Adriatico -- still three weeks off -- that he nabbed his first of eleven wins in 2009, most of which came after August 1, so Farrar probably shouldn't be judged on his performances in February. Fulfilling the rapidly rising expectations won't come easy, but give him time.