Share All sharing options for: Women's Race Returns to Tour of California

The 2010 Amgen Tour of California will again feature a women's race, the Sacramento Grand Prix. This year, the women will compete on the finishing circuit in Sacramento. Originally, talk circulated that the women would race in Nevada City, but the logistics proved impossible. The women's race will take place during the California's opening stage on 16 May.

Here is a map of the circuit: 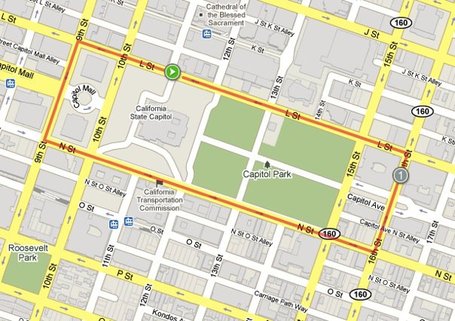 Watch Twitter for updates on the Sacramento Grand Prix. The organizers have also put up a Facebook page for the race.