Unlike the summer, when stage races blot out the calendar, the next two months are a blizzard of one-day events and short stage races. We spent the winter inventing competitions (the VDS, the rankings) which relied on the premise that you should care about these races, so I guess that means I'd better preview them. That should give you some insight into the value we at the Cafe place on long-range strategic planning. Anyhoo...

Last year we rated the importance of the northern cobbled classics occupying the six weeks from the Omloop to Paris-Roubaix. Check it out -- the schedule changes have altered some of the analysis, but at least the first few weeks' worth remains relevant.

But even that list is riddled with omissions from our Glorious New Calendar, so let's check in on just this upcoming weekend. The big picture is that many teams consider this the curtain raising event, at least those squads oriented around Flanders. Another swath of teams are in stepping stone mode: some one-day events, then some shorter stage races, then Paris-Nice or Tirreno-Adriatico, then MSR, the Classics, and into the Giro. On the menu this weekend are:

Full viewing guide in detail, with recommendations, on the Flip.

Significance: We covered this already.

Who wins: this will be the subject of a longer piece.

Should I watch? I dare you not to.

Significance: The Gran Premio dell'Insubria celebrates the obscure region near Lake Maggiore known as Insubria, formerly home of the Insubres, believed to be a Celtic people who supposedly founded the city of Milan.

Permit me a brief aside: European subcultures are becoming something of a fascination of mine. I honestly had never heard of the Insubres before today, and am kind of blown away. It's amusing to think of what counts as regional differences here -- food, local politics maybe, some immigration patterns. Meanwhile in Italy (and elsewhere in Europe, I'm sure), every 20km you encounter a subpopulation with entirely different bloodlines and histories. It's amazing they get on as well as they do. [P.s., on behalf of Romans, bah Milan!] Oh, and Insubres have a kick-ass flag, including not one but TWO snakes swallowing guys, for no apparent reason beyond "we can":

Moving along... the race appears to be in only its second edition, taking over from the GP Chiasso which ran its nine-year course in 2007. There is an utterly nasty-looking hill, climbed twice, in the final circuit, just a few KM from the line. I can't find gradient estimates, but I see this: 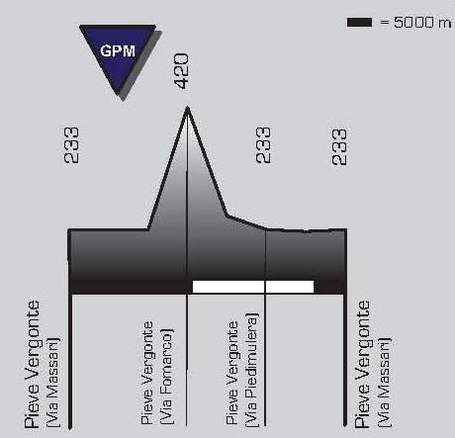 That's a cool 187 meters of elevation in what looks like about 1000 meters of racing, a cool 18%. That sounds excessive, but in any event last year Davide Rebellin and his Diquigiovanni friends used the hill to smash the field and launch Francesco Ginanni to the win over the scattered peloton.

Who shows up: Ginanni returns, for the Androni squad, and the presence of guys like World Champion Cadel Evans, Ivan Basso and Rinaldo Nocentini will generate some buzz.

Who wins: A sprinter who can survive that bump in the road.

Should I watch? The GP dell'Insubria is the first Cat-6 race on the new VDS calendar. But that doesn't mean you'll have video. I wouldn't sweat it.

Significance: This is the companion race to the Omloop, and no mystery to all y'all. KBK returns to the VDS as a cat-5 race, overshadowed by the bigger event up in Gent but no less of a classic, really. There are climbs, cobbles, and enough nasty weather over the nearly 200km course to make for a real race... and to thwart, most years, anything resembling a bunch sprint. The last such conclusion happened in 2007, but a more typical result is one where small groups get small gaps over each other. The hellingen (hills) are as follows:

Who shows up: Most of the big classics teams will be there. You might see a few names drop off overnight as guys finish the Omloop and decide whether they're up for more the next day.

Who wins: KBK doesn't try to preview the Tour of Flanders, and the final rated climb is 50km from home. No matter though, it's February, and a lot of the riders will be gassed from the Omloop the day before. Best bet for victory is someone who didn't win the Omloop. While there are numerous riders who've won both, nobody has done "the double" in a single weekend.

Should I watch? Totally. It's on Cycling.TV, by the way. Bottom line, it's no less a classic than the Omloop, just with a bit less buzz.

Significance: Climbers, Spaniards, and lovers of sunshine will avoid Belgium like the plague and stick to the Clasica de Almeria for a final pre-Paris-Nice or Tirreno tuneup. With 320 days of sunshine a year and a nice bumpy terrain (recognizable to Sergio Leone film fans), Almeria will ensure riders get a good dose of hills and vitamin D before sending them off to meet their doom. The race is kind of a long climb to a nasty summit, then a long descent to a sprint. Kinda has "training" written all over it: 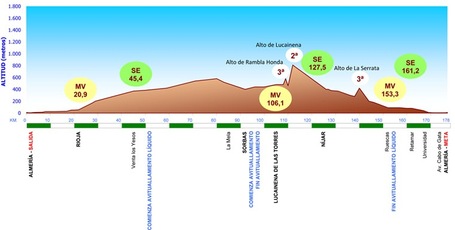 Who shows up: The Spanish teams, Rabobank, Sky and Columbia are all pretty loaded for this one. The organizers seem awfully excited about LuLu coming to train.

Who wins: The last two winners are Greg Henderson and JJ Haedo. So the names you actually need to know for this VDS Cat-6 affair are Mark Cavendish, Graeme Brown, Koldo Fernandez, Theo Bos, and maybe Alejandro Valverde.

Should I watch? If it's an option, yeah, I guess. But after a month of sprints, you might be more interested in Sunday's other two races.

Significance: Another bumpy run around the southern Cantons of Switzerland, in this case a lap around the shores of Lake Lugano. Unlike its Celtic companion, the sprinters will quite possibly be S.O.L. this time. The Piodella, the Ponte di Valle - Cossio and Viganello - Albonago climbs are positioned to break up the race, with the final one coming some 20km from the line. A good, solid climbing workout for a nation of riders who aren't overly suited to the middle east.

Who shows up: Italians galore. Pretty much the same lineup as the Insubrio, since you don't have to change hotels.

Who wins: Last year saw Rebellin lose to Remi Pauriol on the line, while previous winners include Rinaldo Nocentini, Paolo Bettini, and Davide Moncoutie. If Cadel Evans is feeling frisky, he might like to show the colors on what are basically his hometown roads now.

Should I watch? If you can, yep. Last hour could be good clean fun.