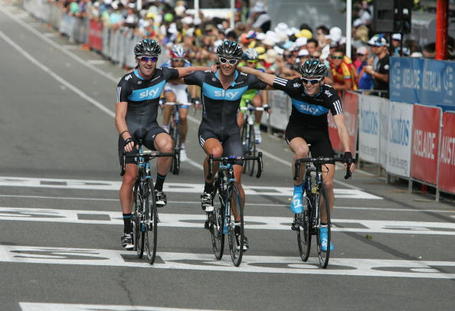 Soccerball fans hereabouts no doubt know the Millwall chant - "We're Millwall and no one likes us." Well it seems that something similar may soon become the chant of the newly born Team Sky, winners of the prestigious season-opening Cancer Council Helpline Classic in Adelaide.

Shortly after their stunning successes down under, the team's impresario Dave Brailsford was forced to make a heart-wrenching plea for other ProTour teams and journalists to stop picking on Team Sky over the size of their budget.

Accusations about the size of the wedge in Team Sky's pocket are based on their courting of Britain's champion Tour de France cyclist and Paul Weller lookalike, Bradley Wiggins, which in some quarters has been compared to Manchester City's luring of Carlos Tevez away from Old Trafford with the promise of the sort of wealth Croesus could could only dream about.

That episode has lead to calls of 'down with this sort of stuff' from some other ProTour team managers and demands that cycling's governing body, the ICU, start copying professional soccerball and introduce a transfer window.

Brailsford's pleas though seem to have fallen on deaf ears and other ProTour teams are still picking on Team Sly.

Most surprisingly, it is the professional peloton's one time bad boy and now top goody-two-shoes, the Maltese-born David Millar, who is now leading the attack of Britain's top cycling team.

The self-confessed drug cheat recently lashed out at the new kids on the block, claiming that "they're not a popular team within the world of pro cycling, they're not really respected."

Asked about how other teams were responding to Team Sky, Wiggins, who will make his Team Sky debut this week in Qatar's version of the Tour de France, claimed that the reason for the antipathy to Team Sky is quite simply envy: "I think there's a lot of jealousy out there," .

Millar's comments, Wiggins claims, are also fueled by the fact that Team Sky didn't want to sign his former teammate: "I was a bit disappointed with Dave’s comments, he got quite personal. And he’s quite hypocritical because he was desperate to be a part of Team Sky."

Wiggins went on to compare his split with his former teammates as being like a divorce: "In the end I suppose my leaving has been like the break-up of a marriage and everybody has taken things personally, but very few people knew the full story."