Share All sharing options for: 2010 Team Previews: Growing Up Rabo 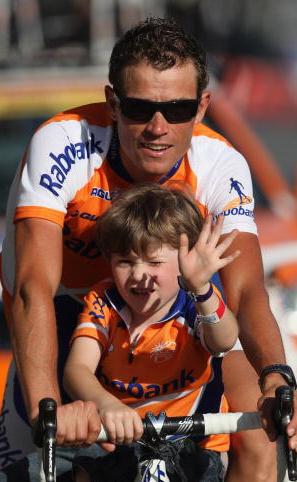 The Rabobank Continental Team, a/k/a the Development Program. I have carried on and on about Dutch Cycling slowly coming around, thanks to an investment in talented youth. Now, development squads are neither new nor uniquely confined to Rabobank. Heck, Lance has his own development project. Rabo Continental aren't doing anything revolutionary; they're just doing the old things very, very well. Or maybe it's timing: a wave of talent just happens to have arrived following a prolongued slumber, and there happens to be a program in place to turn this talent into results... has been since at least 2002. Or it's the fact that Rabobank is now more or less the story of Dutch Cycling: they've been lead sponsors since 1996 and the team's roots date back to the mid-80s, during most of which time there hasn't been another Dutch team of remotely similar stature. Rabobank is at least the image (if not the whole substance) of Dutch Cycling, and the Netherlands has long been a top second-tier cycling country, usually looking up at Italy, Belgium and Spain but fully capable of beating the bigger boys at their own game.

In any event, 15 of the 27 riders on the 2010 Pro Tour Team roster have roots in the development system, and that doesn't account for the ex-Rabo CT stagiares who've turned pro with other teams. Robert Gesink is the standard-bearer for Mollema, Boom, Leezer, Stamsnijder, Reus, Weening, etc. Sebastian Langeveld is the only prominent Dutchman on the squad with no ties that I can detect to the development team... and of course the foreign stars like Menchov, Freire and Nuyens came by alternate routes. Much is expected of this young home-grown crop, and if they continue progressing, if they can pull the country out of its cycling funk and catch up to their high-flying Belgian and Luxembourger neighbors, the Rabo development team will go down as one of the sport's wiser investments in some time.

Denis Menchov and Robert Gesink. Sure, it was nice to see wins on Mont Ventoux by Ardila Garate [fixed!] or the Tour de Belgique by Boom, but Menchov and Gesink are the headliners, point-scorers, and captains. At this point Menchov does little more than go hard after one grand tour a year -- a worthwhile pursuit with three overall wins to his name. Gesink, meanwhile, might show the colors in a few more places than you'd expect. Pegged as a grand tour climber, it was great to see him take the Giro dell'Emilia along with third at Amstel Gold and sixth at Lombardia. Boom, Langeveld and the Classics squad might do big things, maybe even this year, but until then this team revolves around their two GC guys.

Sebastian Langeveld. Veteran Rabo watchers might not actually find this surprising. In fact, this team is well-dissected enough to thwart my effort to call anyone a surprise. Still, if you missed it, Langeveld has been off the front of a few important races the past couple springs, but thanks to tactics (see below) or other matters he hasn't had the results to show for it. But the classics reward strength above all else, and though the competition will be intense, Langeveld should be part of the conversation. And if not, look for him in a stage break or two this summer.

The Tour de France? We still don't entirely know what Gesink can do in a three week race. He crashed out of the Tour last year, and when he returned in time for the Vuelta, he ran out of gas flesh [fixed!] in the final week. His time trialling is substandard for a champion. But the guy won't turn 24 until the end of the Giro this year, so concerns about his skills and chrono work should be kept in perspective. We do know that when he's feeling at all himself, he can climb the nastiest ascents in the world with the best, and that's a great base to work from. Menchov, meanwhile, will be roundly dismissed as an overall Tour contender, yet another Giro or Vuelta winner struggling in vain to translate that success over to le Grand Boucle. But consider this: he made the Tour podium as recently as 2008, last time he rode Le Tour without having emptied himself in the Giro. And he has a very respectable track record in the Pyrenees, with stage wins in the Tour and the Vuelta, so this year's course should be to his liking. As always, Breukink and co. will have plenty of interesting guys to fill out the roster and chase stages. Oh, and one of these days you'd think Gesink will win La Fleche Wallonne, no?

The Cobbled Classics. Not to sandbag or anything, but I think it's a bit much to expect Langeveld and Boom to break through in Flanders or Paris-Roubaix this year. [N.b., many including Gavia see Boom more as an Ardennes guy anyway.] Langeveld is a better bet for Gent or E3 perhaps. Nuyens can bag the odd result, like his impressive second in Flanders in 2008, but his form seems to come and go each spring. Considering how many other teams are completely loading up to contest these events in 2010, I'd think Rabo have to be realistic and hold back for a full assault on Amstel Gold.

Does a team learn tactics, or are they doomed to repeat them over and over? In the last few seasons Rabobank have made a name for themselves as a team with loads of ammo but that couldn't shoot straight. They frequently showed their colors at the front of big races, only to leave rivals and reporters shaking their heads over tactics. No better example than last year's Omloop -- memorable for the four-man all-Rabo breakaway that looked fantastic... but had no chance of success. Gavia's post-race chalk talk was one of the most informative tactical breakdowns you could find anywhere, all year. One mistake after another turned what could have been a huge day for Langeveld into a forgettable third place. Read the whole thing, but here's one scene:

Fortunately for the chasers, Rabobank decided to help out. With 23 kilometers to go and the gap at 1.03, Rabobank sent Juan Antonio Flecha up the road. Was Flecha riding for himself? Or did the team car direct his actions? Dekker's post-race comments suggest that it was his idea to send Flecha across to the break. He intended the move not only to reinforce Langeveld in the break, but also to pressure Haussler to keep riding. In theory, it might have made sense, but Flecha's move quickly brought a reaction, first from a Cervèlo rider, then from the chase group. Flecha's move failed, but not before it sped up the chase group, bringing down the gap to the break.

Yikes. So, is this a systematic flaw in the Rabobank machine, or something that can be fixed? Given the above, I have punted the question over to Ms. Magic Crayons. Wisely so. Here's Gav's take:

I think the transfer of Flecha away from the team helps - He seemed to want to be the team leader there, but didn't have the legs to put it into practice.  Flecha's a good rider, but he can only win under specific circumstances.  He doesn't have the speed for the sprint and he has to get away early.  A rider like that makes team tactics difficult, because you can put everything into setting him up, but the race may not go his way.   Also, Langevelde has another year of experience in him, and I think having shown what he can do, the DS people will be more likely to give him room to race.

What seemed to me to happen there was two things: they had too many talented riders on a relatively equal level at the same time that the DS didn't seem to understand fully what his riders could do.  I think that's probably a risk of having a young team - you aren't always going to be able to judge what a rider can do.  By contrast, though, I think Garmin handles this better- they just freakin' send the kids out there and say have fun, get some results.  So you have Dan Martin winning Route du Sud and Maaskant riding to a high finish at Roubaix. I suspect it's easier for Garmin, though, because they've been from the start a team dominated by younger riders and had a development aspect to the team where Rabobank has the pressure of a storied past to live up to. Garmin I think is also more about marketing the team on personality than results. The Garmin approach probably wouldn't work in a cycling mad country like the Netherlands.

I think the addition of Boom helps - he's a race-winner.  Maybe not immediately, but certainly down the line.  I don't, by the way, think he's really a cobbles rider.  More Ardennes, Amstel, Brabantse type races.  Don't let the 'cross thing lead you astray ;-)  Having a rider like that helps - he's going to seize initiative and say yeah, let me ride, don't second guess me.  Big talent, and he probably knows what he can do, though it seems that he will pick and choose where he applies himself. Overall, more experience should help avoid further disaster. And, the reshuffling of the roster should also help.

Thanks Gav. I agree, and this brings me back to the opening theme: kids coming up together. These guys haven't been training partners for a decade or anything, but they certainly aren't strangers to each other or management. Gotta help... Also, Flecha is an Army of One. Tot ziens!

In this case, I think I've said enough.