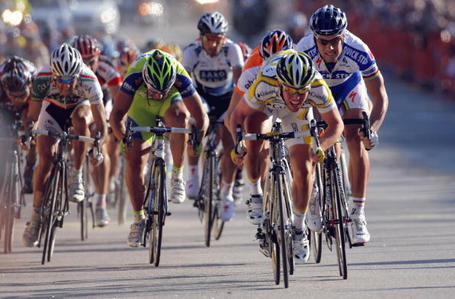 It's dreadfully early and most of what passes for bike racing this time of year is a mix of training and sending a handful of guys after whatever prize is being dangled before the peloton. But for better or worse this is a time of the "season" that features the sprinting crowd, so let's open the Power Polling! Consider this a baseline effort. Also, the criteria is wins -- whether you get them on your own or otherwise. Ergo, this is as much a team award as not.

The Manx Missile will unwrap his 2010 season a week from Sunday in the Ruta del Sol, a slight delay thanks to a tooth problem. This is an ominous start, and the significance of this development should not be taken too lightly. Teeth issues have provided some of the more famous episodes in cycling. There was the time when Maurice Garin nearly lost the inaugural Tour de France when he stopped to have a painful molar pulled, reducing his advantage on the pivotal Nice-Roubaix stage to just under four hours. This resulted in Henri Desgranges incorporating a rule that riders must tend to their own teeth during the Tour, and can only use the tooth instruments that they themselves carried from the start of the stage. Toothaches have been blamed for various missed opportunities: Alfredo Binda's attempt at a 42nd Giro stage; Raymond Poulidor's failure to react to another attack by the well-novacained Anquetil; Hennie Kuiper's failed hour record attemtp; and so on. British riders were barred from the Tour entirely until 1961 when the country's dentistry standards first went into effect. And don't get me started on that episode when a fan bit off a portion of Eddy Merckx's ear in the 1975 Tour, scuttling his dreams of another Yellow Jersey.

Hey, someone has to inject a little suspense into this ranking.

When people gesture toward Greipel or Cavendish and say "I'll have what he's having," they mean Erik Zabel. How long would I have to spend with Zabel before I too could win 70% of my starts? An hour? A week? A season? I don't know. But I am willing to do what it takes to find out.

Ordinarily I would indulge my blatant pro-Farrar bias by touting the glorious new sprint train the American star will enjoy starting... any moment now, and putting him above Greipel. But results matter, and in Australia the Greipel of 2010 looked as crafty, zippy and well-looked-after as the 2009 version. Farrar, meanwhile, is oh-for-two in making it to the front of the race in Qatar. Presumably this means nothing; both sprint stages have had their share of chaos. But to put my speculations ahead of Greipel's actual results wouldn't be right.

Speaking of results, Ale-Jet opened his season in a new kit -- that of the supposedly still existent Lampre squadra -- with a pair of stage wins in the Giro di Reggio Calabria and a win in the GP Costa degli Etruschi. Now, chasing Oscar Gatto and Francisco "Windy" Ventoso around Italy is mere resume-padding for the former Milano-Sanremo winner and owner of a Dead-Sea-Scrolls-like list of grand tour stages. Fans can be forgiven for wondering where the hell he is at times, but this has more to do with his off-bike choices (that extra inhaler dose; hitching his star to the Lpr Brakes wagon; etc.) than anything he's done in a race. If Lampre can hang on to legitimacy a bit longer than Petacchi's last two employers, he should be right back in the mix.

OK, I might be getting ahead of myself here, but let's give Bozic props for a couple wins in l'Etoile de Besseges last week, along with a second place. The Slovenian finished up strongly last year with a third at Paris-Tours, so it's possible he's making the leap.

On further review, his offseason chatter on maybe focusing on time trialing and forgetting about the sprint game may go down as one of the more artful sandbags in some time. Earlier today, Boonen's computer registered 72.8 kph (45.24 mph) in his victorious sprint win in Qatar. I have found a couple files of Cavendish clocking in at 48mph, but every race has its own circumstances. Bottom line, Boonen supposedly looked very, very fast today. If he's on a mission to rescue his good name this year, look out.

The old master still has some tricks up his sleeve. Like Petacchi, don't get too distracted by a couple lost seasons. At his best, as he was in winning the Trofeo Mallorca Sunday, he's got a chance to win, and he doesn't pass up many of them.

Plan C at Columbia last year? Henderson was liberated from Stapleton's awesome depth chart by the Team Sky staff of pira... uh, directors, a positive change when he was dropped off at the front of the Tour Down Under on two occasions, swapping wins with teammate Chris Sutton. Honestly, I can't say where this is going. One possibility is that he'll wind up in service of Edvald Boasson Hagen when the real racing starts, but at least he's been given a chance to get his name out there.

By now this list looks like a reunion of the 2006 Vuelta or something. But Freire is another big name coming off a small year. Was his win yesterday in the Trofeo Cala Millor a sign of the reawakening? Or at least an indication that he may be fit again? Sure would make things interesting if that were so.

He too has not opened an account for 2010, except in the annals of style, wherein no less than the King of Style declared that Thor "bleeds style." Somewhere in Sweden, heads were shaking. Anyway, Hushovd has done so well as a classics guy and all-round points winner that it begs the question whether "sprinter" is too banal a description. Same goes for his teammate Haussler. But when a pack rumbles home, one of them has to wind it up. I'll go with Thor, out of habit.