The monument season is upon us in less than a week, so I thought it would be good time to take a stroll down cycling's Memory Lane, cobbled of course, and take a look at the interesting career of a rider who many of you probably haven't heard of but his story is one of interest as well as heartbreak. Even with Milano-San Remo bearing down on us and the talk about who is going to win is heating up, it is still a good time to look at the story of a rider who never could taste sweet victory at a monument. 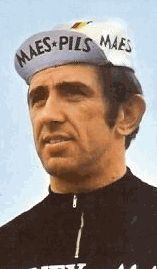 Many of you probably know Frans Verbeeck for his business ventures before you know about Frans Verbeeck the rider. Upon his retirement in 1977, he started up VERMARC (the VER from his last name and MARC is his son's name) cycling clothes, the producers of the Quick Step uniforms along with a multitude of other current teams and also TVM and ADR when they were around.

This business entity though was not what Frans Verbeeck was famous for first though. In the early to mid 1970's, most people think of Merckx, De Vlaeminck, Godefroot, Leman, Maertens, etc. as the powerhouses but Verbeeck was a force that few people could challenge when he was on form. With over 160 wins in his career, he was one of the best racers of his time but his real claim to fame was his toughness. People today look at a rider like Jens! Voigt and see him as the epitome of the hardman but he still ranks under Mr. Verbeeck in my book.

But even with all of this success, he still had a thorn in his side that plagued him throughout his career: Eddy Merckx.

At the conclusion of the 6th stage of the Vuelta a Espana, Frans Verbeeck had had enough with the life of a professional cyclist. He was fed up of the "If your not first, your last" mentality of the 1960's cycling world and was tired of making a non-livable wage . His famous almost last words to his team manager were 'See you around, but never again at a bike race' and with that he returned to his town of Wilsele to put his bike into the back yard to collect rust. He had had a modestly successful career up until then with top 10's in races like Het Volk and Paris-Brussels and a small smattering of wins including the Tour of Flanders B Race (for a while, De Ronde had 3 classes of races:The A's were the established pro's, the B's were to new pros and the C's were track riders) but it wasn't enough to live off of. He returned to Wilsele and to the family milk delivery business and began a normal life driving his milk truck around but it didn't last for too long. By the end of '67 he was back spectating races and then managing the small Goldor team. By the time the summer of '68 rolled around, he was back in the saddle and going around to smaller races...The bug had returned and this time he knew he wouldn't have any second chances.

The winter between '68 and '69 was where the legend of Frans Verbeeck's training started. He was monk-like with his training, never missing a single day, no matter how much it was raining or snowing. He even accomplished this by going and borrowing the postman's fat tired bike to use for training when there was too much snow on the ground. He stayed in and around Wilsele for his winters, as if he thrived in the Belgian winter sleet and only venturing down to the Cote d'Azur come February to win races. An account by a British rider, Billy Bilsland, talked about after one of the races down by the sea, his team had packed it into the hotel during a huge rainstorm and they noticed a rider chugging along and they commented about how much of an idiot he was until they saw that it was Verbeeck and that alone shut them up. He racked up huge numbers of kilometers and was a pioneer of riding on the road all year around.

This new found devotion to training pushed his riding to a new level and it showed during the coming years with his move to the Watney's team and racking up an impressive 75 wins in 3 season from '70-'72 and taking out 2 Omloops, An Amstel Gold, 2 more GP Jef Scherens along with countless other wins. But the major defeats started to add up as well. Second to De Vlaeminck in the '70 L-B-L and just pipping Merckx in the sprint, 3rd to Merckx at the '71 L-B-L at almost 5 minuted back, 3rd again to Merckx but this time at Lombardia at 3:30 minutes back, 3rd to Leman in a sprint at the '72 Ronde...Can you see a trend here?

He had become obsessed with beating Merckx in a monument and it pushed him to the point where his obsession might have hindered his progress.

BY THE HAIR OF HIS CHINNY, CHIN CHIN

The spring of '73 came around Verbeeck was training and riding like he had never done before. He was now considered to be one of the few riders who could beat Merckx in the big classics and it came to a head during that spring. In the lead up to Liege-Bastogne-Liege, he was beaten by Merckx 3 times in the span of a week. 2nd at Gent-Wevelgem in a head up sprint, 2nd at Amstel Gold at over 3:30 back and beaten out by Merckx in the sprint for 2nd at Fleche Wallone behind Andre Dierickx.

Frustration was boiling when Verbeeck started Liege but the conditions, windy and heavy rain, favored the hardman. He marked Merckx thorughout the 236km day and by the time they entered the track at Rocourt in Liege, the front group was down too 12 with riders like Godefroot, Poulidor, Ocana, Thevenet, Zoetemelk along with two on super form. Swining around the final corner, it was just Merckx and Verbeeck barreling towards the line and when they got to it, it was so close that neither knew who had won.

When the photo finish came, it showed Merckx had beaten Frans yet again...by two centimeters. He was so crushed that Merckx even came up and apologized for beating him because he could see how much it meant to Frans just to beat Merckx once in one of cycling's biggest races. To go to the absolute peak of fitness and to still be shut out again left certain scars within Verbeeck. He did have his revenge at the Belgian championships 2 months later when he beat Merckx in a 2 up sprint after 275km of riding but it wasn't the same.

Verbeeck did not give up after his tragic defeat in Liege and continued with fine results but could still not break through for the "big one". In '74 he had come 2nd, yet again, this time to Cees Baal in De Ronde mostly because he had a habit of basing he races around Merckx. Think of Pozzato and Boonen at De Ronde last year but doing that year after year except Merckx was just a half a head above the rest and almost always had an extra gear. He won at Fleche Wallone but still couldn't crack a monument.

If any year would be it, it was going to be '75. Merckx was in the rainbow stripes and Verbeeck had followed his massive training plan to a T and was ready to fight. He started out strong in the spring with good results and snagging the win at E3 over the great sprinter Maertens. He was prepped, finishing 3rd overall at the Tour of Belgium which was in the spring back then, for his final grand showdown with Merckx. 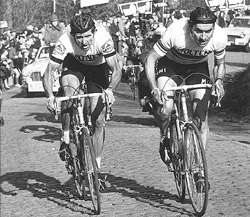 Merckx was in arguably his finest classics form ever having won MSR prior to De Ronde and was showing the one day racing Cannibal was not dead yet. His pre race quote about how good he was going went something along the lines on "I won't win by 10 minutes, but I know that it will be by a lot". When Merckx attacked with 104 kilometers to go, Verbeeck was the only one that could follow and the race was down to 2. This was Verbeeck's chance to beat Merckx head to head and to show everybody that he could beat the world's best. The two worked with precision, with Merckx leading up the steep cobbles and Verbeeck taking his pulls on the flats and their gap stretched out to almost 6 minutes ahead of the peloton. Verbeeck began to see just how good Merckx was on that day and that he had picked the wrong day to fight but he did not give in until 6km to go.

On a slight rise, Eddy just had the extra gear and simply road away from Verbeeck and soloed away for yet another classics win and leaving Verbeeck empty handed yet again. They were the 2 strongest riders by far, with Verbeeck trailing in 30 seconds after but still up 4'30 on the next rider, and it made one of the greatest Flanders that had been ridden. Yet Verbeeck had faced a defeat that hurt him more than any other; he knew that no matter what, Merckx was always going to have that extra gear and if it wasn't for him he would have been one of the greatest classics racers that had ever lived. All he could say afterwards was "He was too fast, what can I say?". He was so obsessed with beating him that he always made the race about Merckx and trying to beat him head to head and not about the race itself. The rest of his classics season was no better...2nd in Gent Wevelgem, 2nd in Fleche Wallone, 4th in Liege and 2nd at Henninger Turm. It is almost hard to look at how close he was so many times and yet he never gave up on trying to get the big one.

His final years were met with similar results. He podiumed at G-W, Fleche, Liege, Brabantsje Pijl, Henninger Turm, and the Scheldeprijs and only winning the latter. He had one last hurrah at Liege in '77 but by that time Hinault was on the scene and he could not handle the new rider and had to settle for 7th place in his final monument. Through his whole racing career, he stood up on 24 podiums in the 12* major classics and he won a total of 4 (2x Het Volk, Amstel and Fleche) and none of them were monuments. His training and commitment to the sport even after such consistent heartbreak is something that can be admired even today. His downfall was that he could not pull himself away from wanting to beat Merckx, even when he wasn't as strong as him, and if he could have done this then he would have broked through for at least one monument win. But he couldn't get past it and now today he is one of only a few riders who people say "How in the world did he not win at least monument?"