Who Will Win Milano-Sanremo? The Magic Eight Ball Tells All

Share All sharing options for: Who Will Win Milano-Sanremo? The Magic Eight Ball Tells All 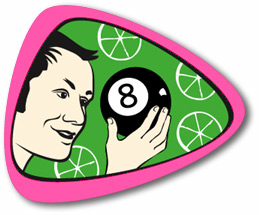 Milano-Sanremo defies prediction. It's the sprinters' classic, but that hardly helps narrow down the possibilities. Especially since it's not always the sprinters' classic. Just ask Fabian Cancellara, who won with a 2 kilometer escape not too long ago. This year's race repeats the finish of the past two years along the Lungomare Italo Calvino. So someone out there - Philippe Gilbert, perhaps? - could repeat Cancellara's feat. At a loss to predict the outcome of this year's edition of La Primavera, I turned to that infallible oracle, the Magic Eight Ball.

Will we see a first-time winner at La Primavera?
Magic Eight Ball says: It is decidely so.
Alrighty then.

Let's see what the Magic Eight Ball has to say about the favorites.

Tom Boonen: Boonen's been showing signs of form, bounding up the road during the Omloop het Nieuwsblad just because he could. Oddly, Boonen has never won Milano-Sanremo. Oddly, because he can climb, sprint, and isn't bothered by monument style distances. Boonen can also count on his Quick Step team to support him nicely. Though last season he swore off bunch sprinting, he seems recently to have changed his mind. A boy's prerogative, I hear. Will Tom Boonen win Milano-Sanremo?
Magic Eight Ball says: You may rely on it.
Tom Boonen and the Eight Ball, so tight.

Daniele Bennati: Bennati spent much of last season injured and didn't really figure in the finale at La Primavera. In truth, he didn't really figure much of anywhere, sadly. This year, he seems to have left his injured past behind. He's even won a race or two recently. His Liquigas-Doimo team is on fire of late, with oodles of wins in a very short amount of time. The team is tailor made to give Benna an arm-chair ride to the finish. Also, they're Italian, which never hurts.
Magic Eight Ball says: Concentrate and Ask Again.
Really, doesn't the Magic Eight Ball know that concentrating with Benna in the frame is like totally impossible? Silly Magic Eight Ball.

Alessandro Petacchi: Petacchi rides for Lampre-Vini Farnese now, and the change looks to suit him. He has Danilo Hondo for lead-out help, and according to Petacchi, the mechanism is beginning to function. I think that means his form is good and he likes his team, but I can't be sure. Petacchi has already won Milano-Sanremo, which if the Magic Eight Ball is to be believed, means an end to his hopes. But the Eight Ball moves in mysterious ways. I mean, they changed the finish since Petacchi won, so it's a completely different race now. Lampre's also bringing Damiano Cunego. I'm not sure why. Maybe he just needed some training or wanted to check out the scenery along the Ligurian Coast. It is quite lovely.
Magic Eight Ball says: Yes definitely.
Alessandro Petacchi will definitely win Milano-Sanremo. Apparently, he's going to share it with Tom Boonen. Hey, no one said the Magic Eight Ball was logical.

Oscar Freire: Freire has two wins to his credit so far at La Primavera. Does he have form for a third? Well, he hasn't won anything yet, which doesn't exactly scream good form. Maybe he'll get lucky and someone will pull a Zabel. Freire will have a solid Rabobank team for support including Paul Maartens and Lars Boom, who may not enjoy this many kilometers in one sitting.
Magic Eight Ball says: Don't count on it.
Alas, no podium flowers for Oscarito.

Filippo Pozzato: He is the Italian National Champion, which should count for something in one of the biggest races on the Italian calendar. Also, he has very swank hair. This also is important. Pozzato won Milano-Sanremo once before. Not a bunch sprinter, Pozzato needs a disorganized finale or a strong breakaway to smile on the podium's top step.
Magic Eight Ball says: Without a doubt.
Carp the diem and all Pozzato, the Magic Eight Ball says it's your lucky day. Of course, it also picked Boonen and Petacchi, so it seems to be having a bit of trouble making up its mind. Omniscience is fickle somedays.

Edvald Boasson Hagen: A fine young cannibal, this Edvald. He's not a pure bunch sprinter, though he's won bunch sprints. A Cancellara-like escape is well within his abilities, if he can hold his form together for the full length of Milano-Sanremo. La Primavera, she is often cruel to the young riders. Also, Edvald appears to have directional difficulties in the final kilometer. Pssst Ed, you get there faster if you go straight. Just trying to help.
Magic Eight Ball Says: Very doubtful.
Maybe next year for the young Norwegian.

Tyler Farrar: The American from Garmin-Transitions made the podium at Omloop het Newsawhatsit for the biggest result of his career to date. I guess he's on form or something. The sprint train at Garmin-Transitions has looked a tad ragged at Tirreno-Adriatico. Hopefully, they get it sorted out pronto. Farrar, he goes uphill pretty good for a sprinter, and it'd be quite a coup to take out his first monument.
Magic Eight Ball says: Outlook not so good.
Farrar's in with a chance, but maybe the podium's looking more likely than the win.

Mark Cavendish: Cavendish won this race last year and is widely considered the fastest sprinter in the world. But even fast guys sometimes lose. Cavendish lost a stack of training time to some sort of gnarly dental problem and is slowly building his form. Or, maybe he's just totally sandbagging. Because that never happens.
Magic Eight Ball says: Cannot predict now.
What good is a Magic Eight Ball that cannot predict now? What, it has a headache or something? So temperamental. Maybe Cavendish, maybe not. That's all I got.

Thor Hushovd: Thor leads Cervélo TestTeam after Barbie got his knee done. Poor Barbie, no second place this year for you. Thor, he has experience. Has he ever won this race? My memory says no. Podium? I'll go with yes. Will he win this year?
Magic Eight Ball says: Better not tell you now.
This Magic Eight Ball is getting irritating. If not now, then when?

Matti Breschel: La Primavera has never had much love for the Danish ex-model (You know you're jealous Barbie, it's okay to admit it.) Maybe he just likes Belgium better. And La Primavera, she can sense such things and it doesn't do to offend her. Holds a grudge, that girl. Breschel shares Saxo Bank with Fabian Cancellara for this race. Who is more likely to win? Let's see what kind of love the Magic Eight Ball has for young Matti, shall we?
Magic Eight Ball says: My sources say no.
See what I told you about La Primavera? She's a feisty one.

Philippe Gilbert: Gilbert never saw a doomed breakaway he didn't like. He joined a move with Riccò not too long ago at Milano-Sanremo, back when Riccò was still racing, that is. Anyway, they didn't make it. Gilbert appears to have gotten slightly smarter in his attacks, or at least, he looked really really smart last year at Paris-Tours and Giro di Lombardia. Winning will have that effect. At Liège-Bastogne-Liège, not so much. Gilbert's a long-shot for this Milano-Sanremo, because really, the breakaway so rarely succeeds. But perhaps the Magic Eight Ball disagrees?
Magic Eight Ball says: My reply is no.
Apparently, the Magic Eight Ball does not disagree. No successful breakaway for Gilbert this time.

Fabian Cancellara: Cancellara won this race in one of the more exciting final attacks in recent years. The RAI announcers nearly had an apoplexy, which is always a sign that some badass bike racing is going down. Look up badass bike racing in the dictionary? You'll find a picture of Cancellara. A repeat of his previous win would be badassery in the extreme. Maybe too extreme. Never count out Cancellara when there's a finish line at stake. At least, that's what I always say.
Magic Eight Ball says: Yes.
The Magic Eight Ball apparently believes in the Badassery. Who am I to question?

One final question for the Magic Eight Ball before we leave it to its own Omniscient devices: Do you know anything about bike racing?
Magic Eight Ball says: Don't count on it.