Milan-Sanremo: the Law of Averages

Share All sharing options for: Milan-Sanremo: the Law of Averages

What's past is prologue--William Shakespeare, The Tempest

Saturday will see the 101st running of Milan-Sanremo--a handy thing for those who love stats, because it means there have been exactly 100 previous editions to play with, neatly divisible into groups of 10. So, what are the trends? What would the average race winner look like, and who among the favorites fits the profile? Races are, of course, tricksy and unpredictable things, but we've already tried to assess form, previous results, and Magic 8 Ball predictions--hey, why not stats?

A couple of notes:
La Primavera was held in April for the first 20 editions, then switched to March in 1928. The age of winner is given as the difference between the month of race and month of rider's birth, irrespective of the exact day either fell upon. Also, references are almost equally split on whether Ugo Agostoni was born in March or July. I went with March since Google gave it a slight advantage, but the difference in caculating averages is minimal.

For favorites, I'm considering (alphabetically): Daniele Bennati, Edvald Boasson Hagen, Tom Boonen, Fabian Cancellara, Mark Cavendish, Tyler Farrar, Oscar Freire, Philippe Gilbert, Thor Hushovd, Alessandro Petacchi, and Filippo Pozzato--the riders given the best odds by the bookies as of this morning (this post is all about the numbers, so that seemed appropriate).

Okay, let's look at the trends--below the fold, that is.

Nationality
One of the first stats that leaps out when looking up MSR winners is that out of 100 races, 50 have been won by Italians. That's impressive, and would seem to favor an Italian winner by a long shot. But dig deeper and things look a little different: 33 of those wins occurred in the first 40 years of the race. In the past 60 editions, Italians have won 17 times, a tie with Belgians. That's still an impressive 28.33%--but it's a lot less than 50%. Subtracting out the early, Italian-dominated years, the winners shake out like this since 1950:

When comparing the Italian and Belgian wins, it's useful to note that 10 of the latter were won by just 2 men: Eddy Merckx and Roger De Vlaeminck in the '60s and '70s. In the same time, there has been only one repeat winner among the Italians. So, to put it another way, in the past 60 years there have been 16 Italian winners, compared to 9 Belgians--and there hasn't been a Belgian winner since 1999 (Andrei Tchmil, who was born Russian but acquired Belgian citizenship in 1998).

The scales, then, would still seem to tip toward an Italian winner. Although not as dominant as they were in the early days of the race, in the past 30 years they've settled into consistently winning 3-5 times per decade. That makes our Italian favorites, Bennati, Petacchi, and Pozzato look pretty good. What is not favored, however, is an Italian repeat winner. Sorry, Pippo and Ale-Jet: there hasn't been one since 1953. Advantage: Bennati.

Possibly bad news for Thor, Boasson Hagen, and Farrar: each represents a nation that has yet to win MSR. There hasn't been a new kid on the block, nationality-wise, since 1987.

The role of repeat winners
43 out of 100 editons of MSR have been won by the same 14 riders. That's a good rate of recidivism. Among our favorites are 5 previous winners: Cancelllara, Cavendish, Freire, Petacchi, and Pozzato. Since the trend has been away from Italian repeat winners, there seems to be a slight advantage here for Cav, Cance, and Freire.

Freire, of course, has already won 2 editions. Does that make him more or less likely to win again? Well, on the one hand...since 14 riders have won 43 editions, that would make the average just over 3 wins among them. But on the other, 7 of the 13 now-retired repeat winners never went beyond 2 wins. Right now, that suggests a better than half chance (53.85%) that Oscarito has also maxed out his wins. Slight advantage, then, to Cancellara and Cavendish.

Age of winner
Here's a handy-dandy chart showing the average age of MSR winner per 10 editions of the race: 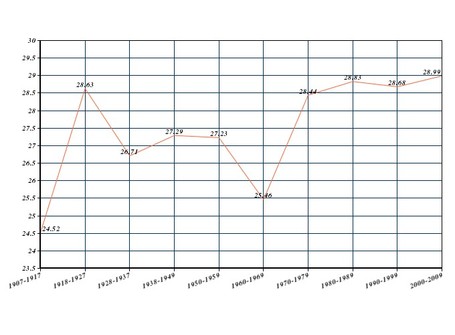 A couple of things are interesting here: first, the race initially was won by younger riders, with an average age of 24.52 for the first ten runnings. There was a spike upward in the next decade, caused largely by repeat winners (especially Costante Giradengo, who at 25.08 was already above the previous average when he won his first MSR in 1918, and was 33.08 when he won his 5th in 1926).

The winner's age settled into a range of just about half a year (26.71-27.29) for the next 30 years. After race organizers added the Poggio in 1960 in an effort to make the race harder and less likely to end in a sprint finish, you might expect the age of the winner to go up a bit: in cycling, speed tends to favor the young, while endurance is the province of the more mature. And in general, that happens: the average age of winner pre-Poggio is 26.88, post-Poggio it's 28.08, a difference of more than a year. But first, the '60s saw another repeat-winner spike, this time downwards, as Eddy Merckx began winning MSR at the ridiculously young age of 20.75. At his third win in 1969, he was still a month younger than Cav was last year.*

In the past 3 decades, we've seen another stabilization of the average, this time in a tight range between 28.44 and 28.99 years of age. Only Filippo Pozzato, age 28.5, fits smack-dab within that current range. A few others are within a year: Cancellara and Gilbert are below at 28.0 and 27.67 respectively; Boonen and Benna just above at 29.42 and 29.5 years old. Advantage: Pozzato--if he can overcome the curse and become the first Italian repeat winner since 1953 that is. Slight advantage: Boonen, Bennati, Cancellara, Gilbert

Petacchi would just beat out Andrei Tchmil for oldest winner--I have both at 36.17 since both are born in January, but Petacchi will actually be older by 19 days than Tchmil was at MSR in 1999.

Summing up
Taking everything into consideration, the law of averages favors Daniele Bennati for the win. He's an Italian who has not won before, and he's within .51 years of the winner's age range of the past 30 years. Fabian Cancellara, a non-Italian previous winner who is also close to the average winner's age, would be second-favorite here. Slight advantages to virtually all the other favorites, though, either for nationality, previous win, or age EXCEPT Farrar, Boasson Hagen, and Hushovd. But laws, of course, are made to be broken...let's see what actually happens on Saturday!

*It was widely reported last year that Mark Cavendish was the 3rd-youngest rider to win MSR. Not even close. From what I can tell, the myth originated with a journalist who mistakenly thought he was 22, not 23. But even so, that would have put him about 5th. If you're interested, Cav was by my calculations the 11th-youngest winner, after Eddy Merckx, Ugo Agostino [reverse these first two if Agostino was actually born in July], Eddy Merckx, Cesare Del Cancia, Loretto Petrucci, Alfredo Bovet, Henri Pelissier, Giuseppe Olmo, Loretto Petrucci, and Eddy Merckx. Remove the repeat winners, and he's still 8th.