Share All sharing options for: Rite of Spring: Milano-Sanremo

Tomorrow, it's off to Italy we go for one of the most beautiful races in the world of cycling. The Italian classic departs Milano on the via della Chiesa Rossa and sets off across the plains of Lombardia. The race covers about 100 kilometers of flat terrain, winding its way south to the coast. As the profile shows, this is some kind of flat. 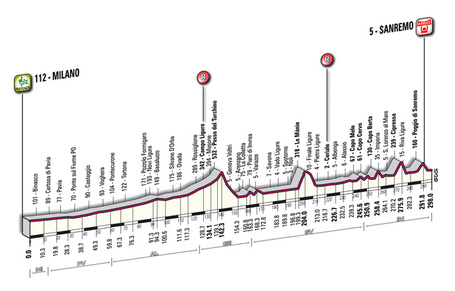 The Passo del Turchino provides the first major obstacle of the day, though as climbs go, the Turchino isn't so difficult. Narrow roads announce the start of the climb, which widens as it climbs through sweeping curves. Near the summit, the pitch steepens, but not enough to cause a selection. A fast descent drops down to the bright light of the Ligurian Coast.

The Passo del Turchino behind them, the riders face a fast, flat stretch of road which runs along the Ligurian Coast and passes through Savona. The course winds its way southwest along the water, before reaching the short, steep Le Mànie climb. La Mànie is narrow and steep, and we can expect some jostling in the field. With over 90 kilometers of racing yet to go, there's no reason for fear. The three Capi, the traditional climbs of the sprinters' classic, follow La Mànie. Mele, Cervo, and Berta: Three's Company, Italian style. The three climbs come close together and are short and steep. Zing go the sprinters' legs.

Not too far to go, now the Real Milano-Sanremo begins. La Cipressa and il Poggio di Sanremo offer the best chances for the would-be breakaway riders. Always a move goes on the Cipressa, while the sprinters' teams try to hold the race together and prevent the climbers throwing their brand of kryptonite into the bunch. A flat, exposed road connects La Cipressa with il Poggio, and often their is at least the hint of a headwind. Few moves survive this perilous crossing. Indeed, Paolo Bettini believed he'd lost the race, when the bunch caught him in sight of il Poggio. Only the urgings of a team-mate led the Cricket to attack again, this time successfully, on the final climb of the day.

Il Poggio di Sanremo is one of cycling's historic spaces. It's short at just 4 kilometers of climbing, but it grows in the telling. Only ten kilometers of racing separate the base of il Poggio from the finish, and if there's going to be a winning move, it will come here. It's a climb as famous for its descent as for its summit, a descent made famous by the crazed antics of riders like Sean Kelly. 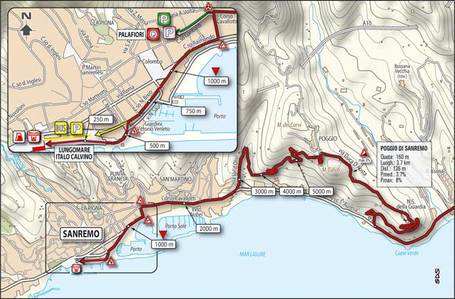 The descent turns to flat road and the final 3 kilometers run along the Lungomare Italo Calvino. This is the straight section of road where Fabian Cancellara launched his big escape and where a breakaway will win. Or get nothing. The road turns slightly as the finish approaches. The finish line awaits in the piazzale Carlo Dapporto. Tomorrow, we will see who celebrates victory in the Italian rite of Spring, La Primavera.