It’s been a long and funny sort of winter, and even though Het Nieuwsblad has been and gone it doesn’t feel like the season has really started properly. OK, The Belgian season’s well underway, where Grace Verbeke and Emma Johansson have been going head to head a couple of times a week for the past month, France’s Christel Ferrier Bruneau took the Cholet - Pays De Loir, Ina Teutenberg won San Dimas for the second year in a row, snatching victory from Mara Abbott with a massive solo break, but in Italy Team Valdarno were reduced to sneaking into the juniors’ races just to get some racing. I wonder who had the photo of a young Tom Boonen on their licence?

But now at last everyone comes together this Sunday 28th March for the first round of the World Cup, The Trofeo Alfredo Binda, held annually in the Commune of Cittiglio, Varese, since 1974. Other races may be shrinking or vanishing completely, but the Trofeo Binda is one of the strongest races on the calendar. Earlier this year they received an award from the UCI for being the best organised race of 2009; earlier this week giant bicycles started appearing on the roundabouts outside Cittiglio, Construction of the grandstands and other infrastructure for both the race and supporting events (scroll down for English translation) is well under way, and all they are waiting on is the arrival of the riders. 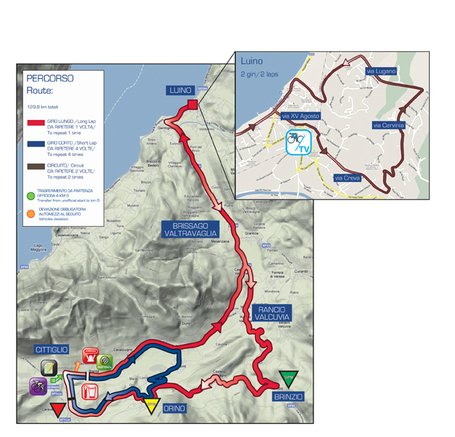 The course is a hilly one, starting out from Cittiglio, heading down to Luino on the shores of Lake Maggiore for two laps there before returning to Cittiglio along the hillier road for four laps of a shorter circuit. As you see it is a very hilly parcours, so in the past has often favoured breakaways. Nicole Cooke won in 2007 by herself, Emma Pooley did likewise in 2008, and last year’s rain gave us the first of many battles between Marianne Vos and Emma Johansson. From time to time a sprinter gets her name into the record books, but this is very much a climbers’ race.

A provisional start list (pdf) is up, including all the usual suspects. Vos defends, as she rode last year, at the head of a Dutch national squad rather than in her usual Nederlands Bloeit colours, with support to be expected from Loes Gunnewijk and Chantal Blaak, and her rival Johnasson returns too with what looks like the Red Sun A squad. Emma Pooley should be the Cervelo leader, with Regina Bruins and Sarah Duster ready to help her as needed, but rather oddly they are bringing along sprinter Kirsten Wild too. I can’t see her winning, but perhaps she is looking to pick up some points towards the end of season prize. HTC Columbia have Judith Arndt and Noemi Cantele at the head of a very strong looking team, Lotto lead with Grace Verbeke and Vicki Whitelaw, while Tatiana Guderzo finally gets to show off her new jersey just down the road from where she won it. Trixi Worrack leads a Noris team that looks to be unfortunately padded out with sprinters; a sad reminder of how promising the team looked to be last autumn, as are the presence of Nicole Cooke in the GB national squad, and Tiffany Cromwell riding with Kirsty Broun and Ruth Corset for Australia. And a bit further afield, keep an eye on eighteen year old Rossella Callovi, leading an Italian national team which was added at the last minute just to give her experience at this level.

TV coverage will be available for the race from RAI who have scheduled an hour of highlights at 16:00 on Sunday afternoon, following 1½ hours of Gent-Wevelgem and half an hour from the Criterium International. Sir might want to order the super-size that afternoon.