Share All sharing options for: Preview: Women's Tour of Flanders

Italy? Been there, done it. That’s so like yesterday’s race. Next Podium Café Spring Break 2010 moves over the Alps, and will be joined by among others the girls from Michela Fanini on their Northern Europe Tour. Twelve days, five races and today’s Tuesday, so where exactly are we? Donovan knows the answer to that one. OK, sorry, no more cheesey music, I promise. But while some will be spending this Sunday standing by the side of the road with plates of moules, cones of fries topped with mayonnaise, and polystyrene cups of steaming hot soup, 26 teams of six will instead be flogging their guts out on the nine bergs and more than eleven km of cobbles that make up the Vlaanderens Mooiste Vrouwen.

The course is 139k long and is pretty much the same as the business half of the men’s RVV, just skipping the long run out to the sea, Den Ast, and the climbs between the Knokteberg and the Eikenberg (so that’s no Paterberg, no Koppenberg and no chance to get a helicopter shot of yourself passing the Taaienberg mushroom). If you want to see more on the individual climbs then as ever check out this wonderful section of the organisers’ website. Actually there’s a lot more worth looking at on that site. Including top tens for every year that the race has been run (Ok, that’s only back as far as 2004), and race reports for all you masters of Google translate. 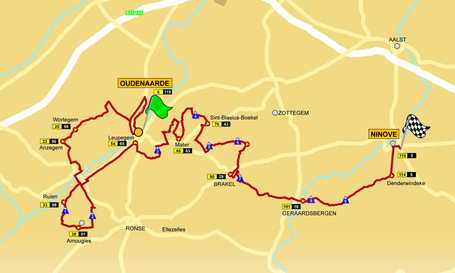 Those old top tens make interesting reading, because if you check them against the start list for this year’s race then you see that around 80% are coming back for another try. That makes predicting a winner an awful lot harder as there are probably around thirty riders who could take this, flukes excepted. Marianne Vos has never managed better than third, which surely is the sign of an open race. Most teams seem to be sticking with the line-up they had at Alfredo Binda or tweaking it slightly to accommodate returnees from the US and from the track of Copenhagen. HTC-Columbia have the past two winners on their team in Ina Teutenberg and Judith Arndt. Cervelo counter with Kirsten Wild and two time winner Mirjam Melchers van Poppel. Vos may not yet have won here, and she loses Andrea Bosman to the Leontien.nl team, but she should have support right to the end from Loes Gunnewijk who has three top ten places in her own palmares. Gauss-RDZ-Ormu have three possible contenders in Giorgia Bronzini, Edita Pucinskaite and Martine Bras, while Bronzini’s old team Safi-Pasta Zara will be looking to their new sprint discovery Inga Cilvinaite. Ruth Corset takes her first step towards becoming a fan of Dan by pulling on the Tibco jersey for the first time, although PdC’s Chicago chapter will probably instead be cheering on her teammate Devon Haskell. Grace Verbeke will probably again be the leader of Lotto, although if Rochelle Gilmore can hang on until the end she may have a good outside chance. Nicole Cooke, the fourth of the past winners taking part, may find that just as in Italy she suffers from a lack of team support, especially if HTC-Columbia and Cervelo once again try to make it tough from the start.

TV coverage may be tough to find this weekend. Some people have been debating whether the top men's races should be encouraged to simultaneously run a women's race on the same day. And while the infrastructure in the form of road closures, barriers, fancy podiums and media centres awash with free snacks may seem tempting, the disadvantage is that all the camera bikes are likely to be following Tommeke, Cancellara and co., and the best that we can hope for here is that they remember to switch on the fixed cameras on the finish line ready to catch the sprint. Or that PdC's roving reporters show how good citizens' journalism can be.

Bumped because I don't think we'll get enough pictures to fill a live thread, although team PdC is right now heading to the start in Oudenaarde.