Share All sharing options for: Brabantse Pijl: Everyone Loves Leftovers!

We've got one more event before we can close the book on the 2010 "Flemish" classics season [a sadder sentence I shall not write this year], only instead of the relatively easy Scheldeprijs it's now the slightly more challenging Brabantse Pijl, a moderately hilly romp through Flemish Brabant, a/k/a the Brussels area. Not really having driven around here I can't pretend much familiarity, and information is hard to come by. The final loops are around Overijse, however, and the info I can find indicates that Overijse is littered with hills, mostly short but hitting the low double-digits. So as usual, if this is Belgium in April, the riders will have a hard row to hoe.

That hasn't stopped Oscar Freire from winning three editions, but those editions all finished around the Alsemberg in Beersel (mmm, beersel). This year's course is completely different. Let's compare and continue... on the flip!

This may or may not be a Podium Cafe Exclusive! because I can't find decent information anywhere else. So... here is last year's course:

Pretty informative, no? The closing circuits are in the purple loop, which ended in Beersel. Now, here's this year's course: 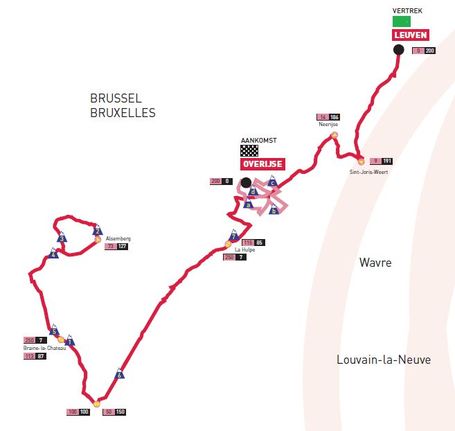 It's a little hard to make out without reading the roadbook, but basically the course follows the usual route to Waterloo, then makes a quick run up to Beersel for one loop of the Bruineput and Alsemberg climbs, then retraces its steps back to Overijse (originally encountered at km 26) for five 12.7km loops. From a spectator's perspective this is actually pretty cool: you could easily sit on the Alsemberg for the first pass, then bike about 15km to Overijse in plenty of time for the closing loops. But I am no longer in biking or even flying distance of any of these places, so it's back to the old-fashioned way of watching on TV.

While the race organizers have seemingly put together a hard course, this still won't matter as much as the varied and shifting motivations of the participants. It's the Wednesday before Amstel Gold, which will mean more riders of interest testing out their legs, only to pack it in before going too deep. Or maybe not; this isn't Gent-Wevelgem and the Kemmelberg. But if the course changes aren't enough, this is also the Brabant Arrow's debut in the Wednesday-before-the-Ardennes slot, so really gauging motivations is nearly impossible. Which has never stopped me from trying:

* If you can't tell exactly where the stench of desperation is coming from, start with the Quick Step and Omega Pharma buses. According to Jered at VeloNation Belgium is on the verge of a shutout from its own races that hasn't happened in 103 years. Arguably a win here would prevent that ignominy (and even that's if you don't count Driedaagse West Vlaanderen or Nokere Koerse, which you shouldn't), and both squads are loading up on their Ardennes climbers to give it a shot. Quick Step are nominally led by versatile Sylvain Chavanel, a former winner, but rather than Boonen or the injured Stijn Devolder they'll rely on Carlos Barredo and Kevin Seeldraeyers to get things unstuck. Omega, meanwhile, have Philippe Gilbert, Jurgen Van Goolen, Daniel Moreno, and in case of a sprint Greg Van Avermaet. No rest for the weary.

* Rabobank will be interesting to watch, or at least this is yet another race where I start out feeling that way. Oscar Freire gets up and down everything, it seems, and with his history here they can't help but bring him out, course changes or no. But it's an eclectic mix that's with him: cobbles guys like Nick Nuyens and newbie Tom Leezer, as well as climbers like our old friend Laurens Ten Dam and Bauke Mollema.

* Vacansoleil could be frisky -- it's hard to expect much more from Bjorn Leukemans, but he's on a wicked run of form: second in Dwars door Vlaanderen, 7th in E3 Prijs, 4th in de Ronde and 6th in Paris-Roubaix. In short, he's been everywhere. So why not here? His teammate Johnny Hoogerland might also like this course.

* Lastly, this course is perfect for Karsten Kroon, and BMC could use a result as much as anyone. Unfortunately, Sunday is also to Kroon's liking, so my guess is that he'll be a bit cautious in a race where you can expect plenty of riders to give their all, and for the race to break up into plenty of small groups. Unless Kroon is committed to the win, it won't happen. Given his unlucky spring, maybe it's unrealistic to expect much.

My pick to win? Barredo. Who ya got?