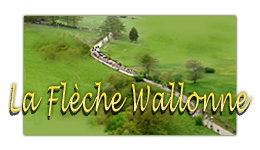 In no race do I speak as certainly of future strategy as I do in regards to La Flèche Wallonne. Everybody knows how the race unfolds, right? Lots of attacks, lots of regroupings, and a brutal bunch sprint of sorts up the Mur de Huy to decide the final. 'Twas the case last year. And sorta in 2008 (moderate-sized group). And in 2007. When the race has broken up the culprit has usually been the Côte d'Ahin, positioned in the last dozen km and forcing the riders to stretch out the effort over its 2.3km slopes. I can't find records before 2000 but the Côte d'Ahin has been in the race every year as the penultimate climb, close enough to the line (10-14km) to make a difference.

Only one climb, the Côte d'Ereffe, in the last 30km beisdes the finishing Mur, positioned roughly where you might expect to find the Ahin. How big a change is this? It's hard to project with much certainty til we see a race run over this route, but let's try to pick through a few factors.

Cote d'Ereffe vs. Cote d'Ahin: If anything, the Côte d'Ereffe looks slightly easier, at least on paper. Compare them side by side. The two aren't meaningfully different in the first 1.5km: brutish beasts holding steady in the 8% neighborhood. The difference is that the Ereffe lets off the gas at that point, while the Ahin takes a brief pause before forcing the riders to kick out another 700 meters in the 6-7% range. This may be too fine a distinction for the stars of cycling to notice, but then again maybe someone uses this to get a gap. Or not, this year.

Rapid-Fire Assault: Previously the Côte d'Ahin capped off a rather unkind stretch where the riders got tossed around by the Ardennes like popcorn. Take the 2009 course -- prior to the Ahin at 184km, there was this lovely stretch:

My knees ache just reading those average grades. Suffice to say that coming to the Ahin, the pack was pretty well spent. And that's just the prelude to the Mur. In 2010, however, the hard spell is packed into kms 137-168, late enough to be felt but not likely in the strategic phase of the race.

So where is the race won? My instant reaction was that with so few major climbs the peloton is even more sure to end up at the foot of the Mur de Huy intact. But is this true? Sure, there will be teams (Caisse d'Epargne, for example; Omega Pharma, for another) who will work to set up the hill sprint finale, but everyone else might find opportunities to attack that didn't used to exist, to the benefit of the race. One idea: the second passage of the Mur de Huy, which is now 30km from the line, not too far for a really ambitious effort or at least to force an interesting selection. Another idea: it's the Ardennes, rarely ever flat, so like Amstel Gold you're never in a bad place to hit the gas. By taking out some of the predictable attack places, it's possible the organizers have actually made the race less predictable, not more. ASO, the organizers, are possibly the most sophisticated race organizers ever, so it bears watching. In past Tours (or Giros etc.) when the race has been ridden over the hardest routes, the tactics have often shrunk to a bare minimum as human limitations come more and more into play. If in fact this is an easier Flèche Wallonne -- and it's a mid-week race, so even that's relative -- it just might be more fun.