At last this season is fully up and going, and as if to emphasize that fact this weekend sees no fewer than three UCI classified races taking places in three different countries. On Saturday it’s to the Netherlands for the Omloop van Borsele, while Sunday splits the peloton with the northerners heading to Belgium for the GP Stad Roesalare while the southerners celebrate the freeing of Italy at the GP Liberazione. And for the moment all the featherweight climbers who came out for the Fleche Wallonne go back to where they have been hiding for the past few months as all three races are ones for the sprinters. So over the page for a brief look at the individual races and the sprinters in the peloton.

The south-western Dutch province of Zeeland is a bit like Venice in that most of the land comes from mud and other sediment deposited at the mouth of a river. But while the Venetians were putting up palaces spaced scarcely a bicycle’s width apart on their mud islands, the Dutch were rather more sensibly keeping the space free for a fast and as untechnical as they come racing circuit. The Omloop van Borsele consists of five laps of a 24km circuit through the fields of Borsele, starting and finishing in the curiously named village of 's-Heerenhoek. The circuit is pretty much circular, the final k is dead straight and the profile even straighter. Bunch sprint, as they say in the trade. Here’s the start list (or an Excel version if you wish), and here’s the full race handbook if you are interested (English version). It looks like a ticker will appear here. This race is also a part of the Dutch Women KNWU Top Competition so also has a large local field.

Here's a short video taken on the finish line of this year's race. 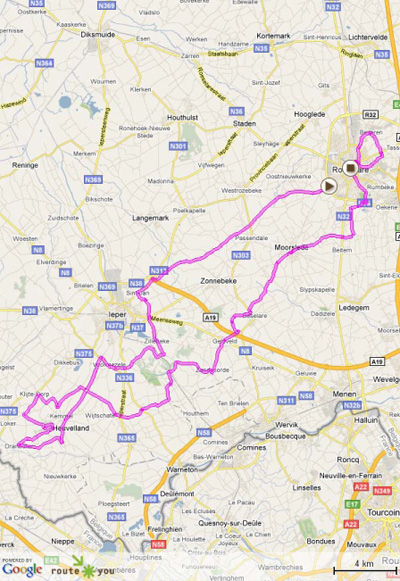 OK I said this weekend was flat but that’s not totally true. Sunday’s GP Stad Roesalare leaves the town of Roeselare and heads south-west for 40km or so to Heuvelland for two laps of a circuit which includes both the Monteberg (800m ave. 7% max 13%) and the Kemmelberg (400m ave. 4% max 22%), then returns to Roesalare via the Helling Geluveld (600m ave 2% max 7%), but that last climb is almost 50km from the end. In 2008 a group of eight escaped near the Kemmelberg and stayed away to the end, but on both other editions of this race it has come down to a bunch sprint. Here’s the start list which is pretty similar to that at the Omloop van Borsele. The best chance of video may come from the Motomedia team.

April 25th back in 1945 was the day the allied troops overthrew the Mussolini regime, and since then that day has been set aside for a general day of remembrance of fallen soldiers. With added bike races. That’s how important bike racing is to the Italians. They start in Crema with a junior women’s race of 61km, then at 14:30 the pros set off on the first of twelve 10km laps of the women’s GP Liberazione. This one’s not quite as flat as Borsele, but the difference in elevation between the lowest and highest parts of the circuit is only 5 meters or so. Pretty much guaranteed to end in a bunch sprint. Aussie rider Helen Kelly has a nice description of how it was back in 2004 (along with some other great race reporting), and here’s a video the Italian Cicloweb people made last year (skip ahead a bit to get to the racing).

So with a sprinters’ weekend of racing ahead, who are the top sprinters in the peloton? Here’s my short rundown drawn from those who regularly ride the European circuit.

Ina Teutenberg (HTC-Columbia). Psychologically she still gets the number one spot, even if I’d really want to do a race by race run through of her results over at CQ before handing her the statistical title. She’s been at the top for almost a decade now and still looks nowhere near the late Zabel, esteemed mentor stage. If you want to understand the sprinter mentality look at this great piece Velonews did earlier this year.

Coolly assessing [Kristin Armstrong]’s risk to her Saturn team, Teutenberg dropped back and stiff-armed Armstrong. "Ina took her hand, pushed me on my shoulder and I went flying across the road." Then she said, "Get off our wheels and stay away from my team!"

Chloe Hosking (HTC-Columbia). The young apprentice, currently Teutenberg’s main leadout woman but may well get opportunities for herself later in the year, but she’ll have to start beating Rochelle Gilmore on the domestic Australian circuit beforeshe can even think about ousting the boss.

Kirsten Wild (Cervelo). Her move to Cervelo from Leontien van Moorsel’s AA Drinks team at the end of 2008 coincided with a boost in performance which saw her boost in performance which took her from a good local rider who was close to the podium internationally right to the top. Second in last year’s UCI rankings behind Marianne Vos, so should probably be number one, I just have this suspicion in the back of my mind that she just loses out to Teutenberg on a head to head comparison. Maybe that’s one to add to the things-to-do (later) list. Whichever way you order them, Wild and Teutenberg are the current sprint queens by some distance. Beside them the rest look like children.

Julia Martissova (Gauss RDZ Ormu). Second to Bronzini last year in the GP Liberazione, now likely to be leading out her one-time rival.

Rochelle Gilmore (Lotto Ladies). It’s a close call for 3rd spot on the sprinters’ hierarchy between her and Giorgia Bronzini, and with the two of them likely to be racing on different sides of the Alps most of the year that’s not going to be definitively settled, especially since Lotto will be riding for Grace Verbeke in the World Cup races where they are most likely to meet.

Rasa Leleivyte (Safi-Pasta Zara-Manhattan). Last year Lithuanian rider Rasa was Giorgia Bronzini’s leadout. This winter Bronzini moved to Gauss, Rasa was promoted to number one, and in her very first race, stage one of the Tour of Qatar, proved she was up to it by beating her old boss.

Rosella Callovi (Italian National Squad). The great up and coming Italian. Current World Junior Champion and more impressively second to Leleivyte in the recent GP Comune di Cornaredo. Maybe more of a name for the future than for this year, but worth keeping an eye on.

Kirsty Broun (Australian National Squad). The other Australian sprinter. Because you can never have enough, I guess. Kirsty usually finishes behind Rochelle Gilmore in domestic races but may beat her more often in Europe if she has a team working exclusively for her.

Angela Hennig (Noris). Team Noris. Read that name and weep. Another name contending for the crumbs left behind when Teutenberg and Wild are absent. I hope for the team’s sake that she does well this year.

Liesbet De Vocht (Nederland Bloeit). Third placed in the GP Stad Roeselare last year, her chances of improving on that may depend on whether Vos is riding or not. As the Bloeit look determined not to be the Snow Vos and the Seven Dwarves show this year she may be given a few opportunities of her own.

Shelley Evans (USA National Squad). Well riding for the USA team until the monkey decides to go international, and Ted King can vouch for the fact that there is international demand. Shelley didn’t manage to get a win when she was riding in Europe last summer, but made up for that with an astonishing four out of six stage wins at the Tour of New Zealand in February.

Liu Xin (Giant Pro Cycling). Two podiums in the Tour of New Zealand suggest that it’s worth keeping an eye on this rider.

Well that’s my brief run-down, and I’ll stop it here otherwise the racing will be over. If there’s anyone that I’ve missed out or not done justice to, well that’s what comments are for.