Ever woken up in the morning thinking "Oh no, not another little stage race"? Probably not if you follow women’s racing because this is the first one since the Tour of the Ardeche last September, a whole seven months ago. But even so, anyone expecting a gentle little race to shake out the legs should beware because Gracia Orlova is a vicious little beast; while the stages may be short, the profiles are sharp.

Orlova is a small town at the far eastern end of the Czech Republic which has been hosting a top level women’s stage race every year since 1987 (and has no connection to Lyubov Orlova, Stalin’s favourite actress). That makes Gracia Orlova the third oldest race on the current calendar, behind only the Tour de l’Aude and the Thuringen Rundfahrt. It may not be as well known as those races, possibly because the organisers never seem to have registered it at the highest level with the UCI, and it always seems to have to compete with other races run at the same time for the best riders, but its list of winners is still pretty respectable, including multiple wins from Hanka Kupfernagel, Nicole Brandli and Judith Arndt. The course itself doesn’t change much. In recent years it has settled down to a regular pattern of five stages in four days, including a short trip over the border to nearby Poland, and as the race director Miroslav Kolacek says "After all, routes states same as a last year, they will lead through beautiful nature with painfull hills varied with plains." Or in English "Translator? We don’t need no stinking translator." Actually that download gives you a big pdf complete with maps, profiles, race regulations, prize monies and lots more. In both Czech and I’ve-got-a-mate-who-studied-a-bit-of-English.

If you want to get an idea of the race then start with Greasemonkey Benny’s reports from 2007, parts one and two, and videos teasers, parts one and two. Then if you want more then go here to watch a half hour programme of the highlights of last year’s race (Czech women’s names are inflected, hence Vos-ova, Worrack-ova and so on). But Kolacek is more reassuring over the state of the roads this year "We dealed problems with bad road conditions after long winter, route planning atc." I thought the roads looked OK last year, but that might have been selective editing.

The field is weakened by a biggish clash in choice of races this weekend, not so much Friday’s GP de Suisse time trial but more because there are double headers in both Luxembourg (GP Elsy Jacobs and GP Mameranus) and Italy (trofeo GFM Meccanica and the new Muri Fermani, the Italian Flanders), and there are only five familiar UCI trade teams starting, Team Hitec Products, Team System Data (although Rachel Neylan expects to be riding in Luxembourg), SC Michela Fanini (led by Jeannie Longo’s long-time training partner, Edwige Pitel), Nederland Bloeit, and Fenixs – Petrogradets (Svetlana Boubnenkova is still one to watch, and Irina Molicheva was in the lead group at the end of the Trofeo Binda when she crashed out with Emma Pooley), but of those the Bloeit are the best by a wide margin (compare that to last year when Nurnberger, Columbia, Bigla, DSB, Selle Italia, Red Sun and Leontien turned up), but that doesn’t mean that Vos just has to turn up to win. Riders turning out in national squads include Nicole Cooke for GB (supported by both Emma and Laura Trott), Shelley Evans for the USA (plus young Coryn Rivera), who may suffer a bit with the hills, and a strongish Russina front line of Olga Zabelinskaya, Julia Martissova and national TT champ Tatiana Antoshina.

Here’s a summary of the stages:

That looks easy enough, doesn’t it. Now look at the stage profiles. 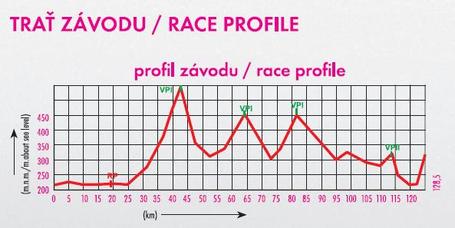 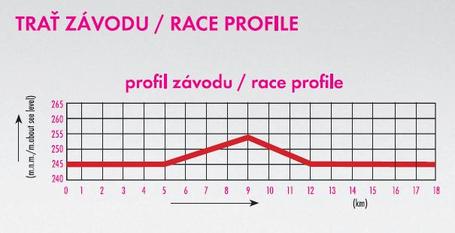 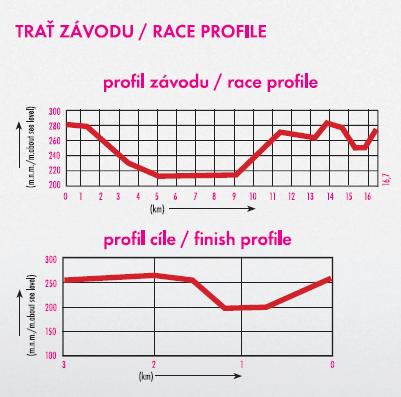 I make that three out of four stages finishing uphill, with gradients of 10%, 15% and 10%. Anyone who wants maps should either download the race manual or go to the main site(there's an "English" option which sort of gives you an English version). This looks like the local TV station which may have something helpful (no, I don't read Czech either - Just click on things that look like they might be relevant). We’ll try and keep track of results and any possible video in the comments.