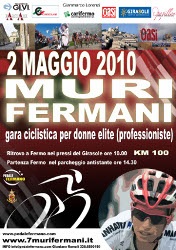 Every so often someone somewhere in Italian cycling comes up with an idea of such genius and that in hindsight seems so obvious that it’s hard to see why no-one thought of it before. An instant classic. A couple of years ago such a brainfart gave us the Monte Paschi Strade Bianchi (or whatever it calls itself nowadays. Although if they get the race right so instantly then maybe we can give them a few years to come up with a good name. Californians would still be arguing over which font to use). Now the stars seemed to have aligned themselves again over the Italian province of Fermo and some nameless Italian goddess has given birth to "I 7 Muri Fermani" or the seven walls (‘cos that’s what mur means in Italian) of Fermo. Alright, maybe it wasn’t a goddess. Actually it was a local government re-organisation back in 2004 that led to the creation last year of the new Marche province of Fermo. Now the Marche are well known as a cycling mad bit of Italy (and yes, that plural "are" is grammatically correct), so what better way to celebrate your creation than by instituting a new bicycle race.

Edit - In a Podium Cafe Premiere, we present a race not merely with links to video, but with LIVE VIDEO ON THE PAGE

First of all go off and whet your appetites with this little video ( and no, I hadn’t realised that ciclonews.it had been doing video too) put together by the organisers explaining a bit of their history, then going on to ride the most important parts of the course, the seven hills with a small group of riders (none of whom I recognised, and going by the way they zig-zagged up the worst of the climbs none of whom should). The start is a bit sponsor heavy (but that’s how you get to see the race – number two sponsorship company is a local ISP. Did I mention the streaming.) but hang on or fast forward a bit if your Italian’s not up to it to see the course itself. Lat year they ran just a single 100km Gran Fondo. This year there are two planned for the morning of Sunday 2nd of May, a short one of 107km with a mere 830m of climbing, and the seven walls itself, 137km, 1900m climbing at gradients of up to 25%, including those seven hills.

The Seven Walls of Fermo: 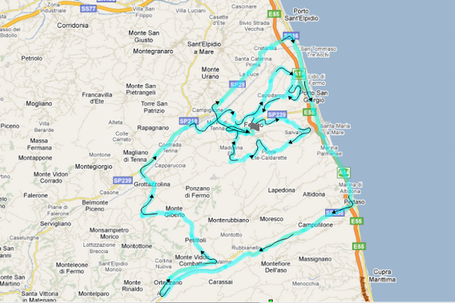 Now for the good and the not so good news. The good news is that they decided to make this into a bigger event by staging a professional women’s race in the afternoon. The not so good news is that they seem to have bottled it completely on the course. That big Gran Fondo course looks like just the sort of course that the women’s circuit needs, something that will really shake out the peloton and let the strongest come to the fore. So are they riding it? No, instead they are going round a flat 7km circuit in the valley below the old town fourteen times before blasting up the hill to finish in the central piazza. But much as that disappoints me, I’m going to be kind and believe that they are testing out the local logistics before doing it properly next year, but it’s still a disappointment. So let’s not get too indignant about this year, but instead let them know that over here at least we think it would be a really really good idea to race the main circuit. They’ve got a pretty good start list at least, even if that’s the third country that expects to see Rachel Neylan this weekend. I’ll go for Giorgia Bronzini beating Rasa Leleivyte in the final uphill sprint.

That circuit in full:

And that live TV coverage. It’s here (or try the proper front page here), but I suspect that it will only be of the Gran Fondo. But Italy’s multitudinous local TV channels should allow you to catch highlights on TVRS or TeleA, or ABChannel.