Dateline Oudenaarde: PdC In the House!

Share All sharing options for: Dateline Oudenaarde: PdC In the House!

Or at least The Pub: 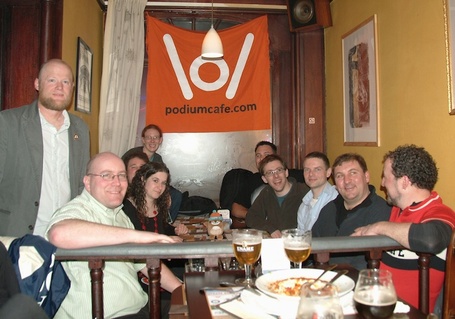 Pictured: JSallee, Jens, Albertina, Celerity, Omnevilnihil, Mathieu G, tedvdw, Mr Van P, and me. Not pictured, because he's taking the picture: Sui Juris. You thought we were kidding? Anyway, we had a great gathering, thanks to all of you who came out for this!

Big day out on the course today. Pete and I did the 150, and it was raining pretty hard from the outset. If this weren't possibly a one-time trip, I might have opted for the 75km ride, but this is our big chance, so we set off. While the climbs were hard (more in a moment), what stood out fairly early on was the effect of the long flat cobble sections. Some of them, memorably the Sationsberg, were just really bumpy and the sections were looooooooong, By the end of the day I was riding very slowly over these flat sections -- a significant improvement over my performance on them in the morning. So, if you're scoring at home, that's cobbles = hard. Whether you're going up or down. Actually, down is worse. Oh, and occasionally you see bike carnage, like the dismembered rear derailleur or the quick release skewer I saw wedged between some cobbles.

Anyway, I frequently recalled George Hincapie's description of the Ronde van Vlaanderen as being defined by the innumerable twists, turns and undulations. I can verify that the race fits the description. Not that those details mattered to us, we weren't blasting out of the corners. Just something not to forget.

OK, the climbs. First, it's a little shocking that they let us out on them the day before, because whatever shape they were in yesterday, they are now covered in mud churned up by the wheels of several thousand cyclo-tourists. The course will be a bloody mess tomorrow.

The Koppenberg is virtually unclimbable. Maybe these inhuman beasts will get up OK, but mere mortals like me didn't stand a chance. The only other climbs I stopped on were the Paterberg and the Muur, both situations where I maybe could have made it but had people stop in front of me, or in the case of the Paterberg, have the guy in front of me put me into the barriers. Might not have made it there either. But I had a chance, given some space. Koppenberg: no chance. None.

Winds should be strongly at the back of anyone in the lead after the Bosburg. That's frequently the case and has been this week.

All for now, morie in the morning.